Netanyahu gives up on private-plane ride to Washington

With criticism pouring in from all sides, Prime Minister Benjamin Netanyahu abandons his plan to travel to Washington on a private plane. 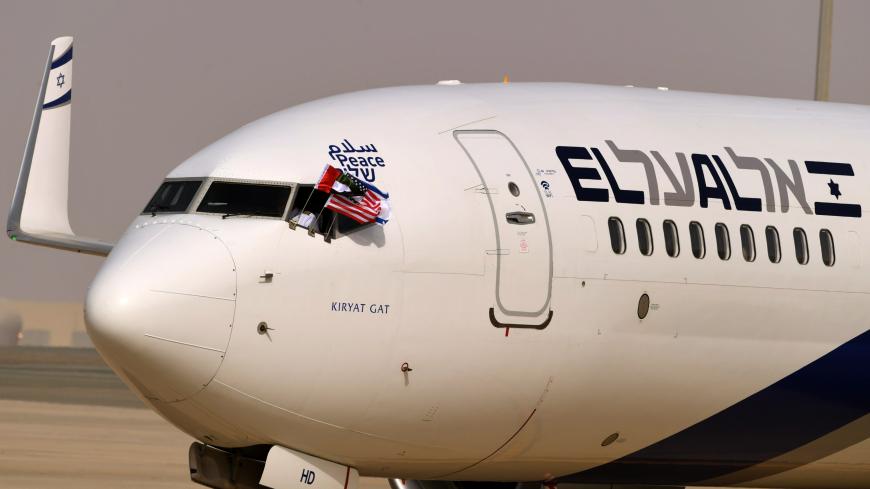 The Emirati, Israeli and US flags are attached to an Israeli El Al plane adorned with the word "peace" in Arabic, English and Hebrew, upon its arrival at the Abu Dhabi airport in the first commercial flight from Israel to the United Arab Emirates, on Aug. 31, 2020. Prime Minister Benjamin Netanyahu now plans to fly an El Al plane to Washington for next week's ceremony marking the Israeli-UAE deal. - KARIM SAHIB/AFP via Getty Images

Facing mounting public criticism, Prime Minister Benjamin Netanyahu announced Sept. 11 that he had changed his decision to travel to Washington on Sept. 13 on a private plane. Netanyahu is set to participate in a Sept. 15 signing ceremony at the White House for the normalization agreement between Israel and the United Arab Emirates, under the auspices of President Donald Trump.

A statement issued by Netanyahu's office said, “In order to prevent the media from diverting attention from the historic agreement with the UAE and possibly with other Arab countries as well, the prime minister will fly with the delegation in a more spacious plane, with strict separation arrangements to maintain his health.”

According to publications, Netanyahu, his wife, Sara, and their two sons, Yair and Avner, will fly on the same El Al Boeing 777 flight as the Israeli delegation and Israeli journalists.

Netanyahu had initially planned to fly on a private charter flight from Spain, hired through Israir. His office said the prime minister had been advised by health professionals to fly on a separate plane out of concern that he might contract the coronavirus on the flight. His office had said, “Due to fears that the prime minister could be infected with the coronavirus on a flight with more than 70 people, professional sources instructed the prime minister to fly in a separate plane that the State of Israel uses from time to time.” Associates of Netanyahu added that his family members were to cover their part of the cost; a Channel 12 report said the private flight was expected to be at least $145,000.

Reports about the private plane flight, coming as Israel struggles with an unprecedented economic crisis, generated harsh reactions on social networks and in the media. Opposition leader Yair Lapid tweeted early Sept. 11, “Private plane?! Now? Why a private plane suddenly? People have nothing to eat. There is no limit to the detachment and obtuseness of this man.”

Several media outlets — including Israel’s three leading TV channels — decided to cancel the flights of their reporters and film crews. The networks explained that under current circumstances — denied onboard briefings by Netanyahu and forced to stay at a Washington hotel at all times except for the ceremony — there was no justification for sending special teams from Israel.

Other criticism came from Israel’s national carrier El Al over the use of a foreign company to fly the prime minister. The Israeli Pilots’ Union also issued a statement that said, “We Israeli pilots who served the country in war should also serve it in peace. … Israel and its leader should have national respect for the flag, aviation and Israeli workers.”

Netanyahu’s flight to Washington raised again the issue of the purchase of an airplane for the exclusive use of the prime minister. In recent years, Israel has invested hundreds of millions of shekels (more than $160 million) in purchasing and preparing a Boeing 767 to serve as the Israeli equivalent of the United States' Air Force 1, but the plane is still not operational. Cost overruns are now being investigated by a special team at the State Comptroller’s office.