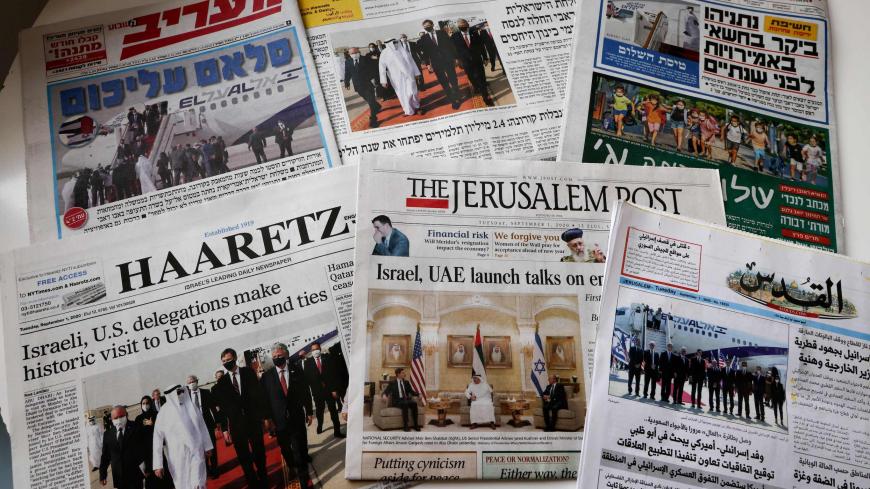 This picture taken on Sept. 1, 2020, in Jerusalem shows the front pages of Israeli and Palestinian newspapers with images of the US-Israeli delegation arriving to Abu Dhabi on the first commercial flight from Tel Aviv to mark the normalization of ties between the Jewish state and the UAE. - MENAHEM KAHANA/AFP via Getty Images

On the heels of their historic deal to normalize relations, Israel and the United Arab Emirates have set up a joint body to collaborate on financial services and investments, Prime Minister Benjamin Netanyahu said Tuesday.

The Israeli-Emirati committee will discuss “advancing cooperation in financial services and lowering financial impediments to making investments between the countries and promoting joint investments in the capital markets.”

A special working group will also “create the conditions for joint investments that meet international standards including in the struggle against money laundering and financing terrorism.”

In a statement, Netanyahu said he welcomed the agreement, which was signed in Abu Dhabi and marked the first official memorandum of understanding reached between the two countries.

“These understandings will assist us in advancing mutual investments and widespread cooperation,” he said, adding that others in aviation, tourism and trade would follow.

Last month, the Donald Trump administration announced that Washington had brokered a deal to establish ties between Israel and the UAE. In exchange for the UAE’s recognition of the Jewish state, Israel has agreed to suspend its planned annexation of large portions of the West Bank.

On Monday, delegations from Israel and the United States arrived in Abu Dhabi on the first-ever direct commercial flight between the UAE and Israel.

The UAE is now the third Arab country, after Egypt in 1979 and Jordan in 1994, to recognize Israel. During his five-day tour of the region, US Secretary of State Mike Pompeo met with the leaders of Sudan, Bahrain and Oman last week in an effort to broker similar deals.