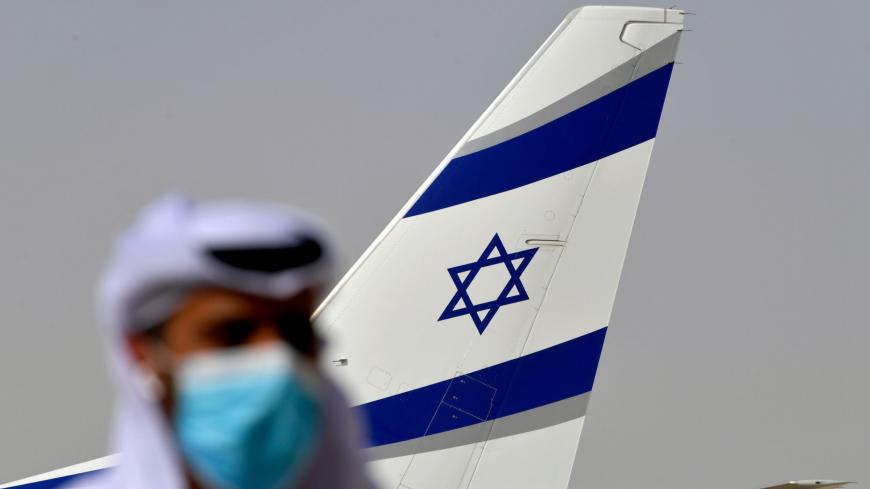 An Emirati official stands near an El Al plane that carried a US-Israeli delegation to the United Arab Emirates upon its arrival at the Abu Dhabi airport in the first-ever commercial flight from Israel to the UAE, on Aug. 31, 2020. - KARIM SAHIB/AFP via Getty Images

Prime Minister Benjamin Netanyahu hailed the announcement by Saudi Arabia earlier today allowing flights “from all countries” to cross over its airspace while traveling to or from the United Arab Emirates.

The Saudi announcement did not mention Israel, but clearly means that flights from Tel Aviv to Abu Dhabi and back can take the shortest route. Instead of seven and a half hours, a Tel Aviv-Abu Dhabi flight will now take only three. The first commercial flight from Tel Aviv to Abu Dhabi on Aug. 31, operated by the Israeli national carrier El Al, received an exceptional authorization from Riyadh to take that route.

In a tweeted video, Netanyahu qualified the Saudi decision as a “huge breakthrough” that will help the Israeli economy and reduce airfare. “For years, I have been working to open the skies between Israel and the East. It was spectacular news two and a half years ago when Air India received approval to fly directly to Israel. Now there is another tremendous breakthrough: Israeli planes and those from all countries will be able to fly directly from Israel to Abu Dhabi and Dubai and back. Flights will be cheaper and shorter, and it will lead to robust tourism and develop our economy.”

Netanyahu said that the new Saudi policy will open up the East, adding, “When you fly to Thailand or anywhere else in Asia, it will save time and money. This is amazing news for you, the citizens of Israel. These are the benefits of a peace that is genuine."

Foreign Minister Gabi Ashkenazi also welcomed the Saudi decision. In a press statement that did not mention Saudi Arabia by name, Ashkenazi said, "The opening of the skies to the east for flights from Israel to Abu Dhabi constitutes the first step in advancing talks and for the normalization agreement with the UAE." Earlier in the day Ashkenazi said he hopes direct flights between Israel and the UAE will be established within a few weeks. For the moment, according to publications about bilateral talks, it seems that Israelis would need to apply for a visa before booking a future flight to Abu Dhabi or Dubai. UAE citizens wishing to visit Israel will have to do the same.

Netanyahu spoke today on the phone with Egyptian President Abdel Fattah al-Sisi, who said that Egypt supports “any steps” that allow for the establishment of an independent Palestinian state and “provide security to Israel."