The arrest of six senior officials on corruption charges shows that serious steps are taken in the fight against corruption, amid calls that the government speeds up its reform program. 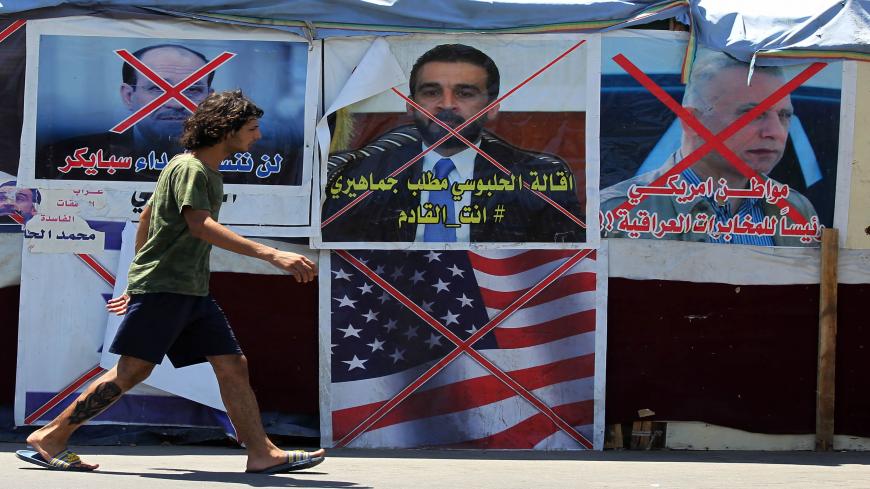 An anti-government demonstrator walks past posters of Iraqi polititians and a US flag in Tahrir Square in the capital Baghdad, Iraq, Aug. 1, 2020. - AHMAD AL-RUBAYE/AFP via Getty Images

Some political forces were quick to welcome her announcement, although there are figures accused of corruption among their ranks. What's more, the protesters who took to the streets in October 2019 have accused these forces of pocketing public money.

Speaking to Al-Monitor, a close associate of Kadhimi confirmed that serious steps are taken to hold accountable those involved in corruption cases. The source said, “The investigation committee that Kadhimi set up Aug. 27 led to security forces arresting Sept. 15 seven senior corrupt persons — who will be named later — including the former director of the pension authority.”

A day after the special representative’s remarks, Kadhimi imposed changes to a number of government positions. The changes include appointing former Defense Minister Khalid al-Obeidi as head of the operations section in the Iraqi Intelligence Service that Kadhimi himself is still heading.

Yet political forces, including the Sairoon-Fatah alliance, lashed out at this measure, viewing that such a measure “could reach the point of overthrowing the Kadhimi government.”

The Sunni forces have also lashed out at the new appointments, while the State of Law Coalition perceived that “the administrative appointments have expanded the quotas.”

Commenting on such reactions, the source noted, “The political parties are mired in the sharing of quotas that they openly do and refuse that their privileges be touched. They cannot deceive the Iraqi people by saying that they refuse [such practices]. The appointments involve professional figures and do not consist of radical changes. The names were selected from within the institutions themselves, given that the legal work deadlines have passed, while taking into account their integrity, experience and the national balance.”

The political forces are obviously wary and fear the street and are trying to enhance their image in any way possible. That has prompted Fatah Alliance leader Hadi al-Amiri to release a statement Sept. 14 indicating that he did not know about the appointment of Sami al-Masoudi as head of the Hajj and Umrah Authority. That would mean that Kadhimi did not consult with the political parties about the appointments and did not opt for quota-sharing.

Alia Nassif, a member of parliament for the State of Law Coalition, told Al-Monitor, “Combating corruption is among the most significant challenges facing the Kadhimi government. The government is yet to get to the level of the serious challenge that the state faces in fighting corruption and illicit arms.”

She said that she believes that “so far, the changes in the positions that Kadhimi made continue to be part of the blocs’ desires for quotas, which is worrisome for the Iraqis who pin great hopes on Kadhimi as a person in founding a new path in the state administration away from quota-sharing of positions.”

Nassif added, “The citizens’ despair stems from the fact that they did not see any corrupt individuals appear before the judiciary under the previous governments, and they are hopeful that this will happen under the Kadhimi government.”

On June 20, Kadhimi pledged to move forward with financial and economic reforms, while some political forces fear that combating corruption affects them. The first steps were made June 29, by tasking the Counter-Terrorism Service with managing the border crossings and appointing new heads for the civil aviation authority and Shiite endowments.

Iraq's former Communications Minister Mohammed Tawfiq Allawi — who was nominated to form a government before Kadhimi, but failed to win the parliament’s vote of confidence — told Al-Monitor, “An important factor in combating corruption is to hold early and fair elections, which Sistani reiterated three times in his meeting with Hennis-Plasschaert. Thus, Kadhimi is at a crossroad — either fair elections or failure. This is because fair elections would end the ongoing corruption.”

Allawi warned against “seeing the public unconvinced with the elections’ results, because this would deepen the country's problems and pose a threat to the unity and the future of the people.”

Yet member of parliament Falah al-Khafaji told Al-Monitor, “Ending corruption and enforcing the law ought to take place before early elections are held … otherwise there are no fair elections.”

Shorooq al-Obeiji, secretary-general of the National Civil Movement, told Al-Monitor, “Outlawed forces outside of the state are in control of the state’s key positions. Iraqis do not feel that they are citizens of a state serving them through its institutions.” She denounced that “the political class-linked forces have exploited the country’s wealth to their advantage.”

Obeiji added, “All of this defect did not speed up steps to achieve reforms, which should have been very clear by now. Also, a clear methodology to achieve reforms is still absent even though corruption prevails.” She called for “a strategy based on legal mechanisms and a mass mobilization so as to implement such a strategy, before [the people] start to feel that the government is weak in the face of the corrupt forces. The prime minister needs to be aware of that and refrain from holding the stick in the middle.”

The editor-in-chief of Al-Sabah newspaper, Abbas Abboud, told Al-Monitor, “Kadhimi has more than one quality required for success, given that he is an honest person whom the majority of parties at home and abroad accept. Yet he needs to back up words with actions and to be open to the people. The reforms will not roll out before the elections, because it is neither the right time nor the right circumstances.”

In a speech to the UN General Assembly in September 2019, President Barham Salih stressed the challenge of corruption, which he labeled the “political economy of conflict."

The dominant forces are expected to desperately prevent any measures from being taken against corruption symbols within their ranks. Yet that will necessarily reactivate the protest movement, particularly since Sistani announced a supportive position.