In yet another diplomatic push to ease mounting pressure from the United States, Iranian officials were busy hosting two visiting foreign ministers to talk solutions for economic relief. 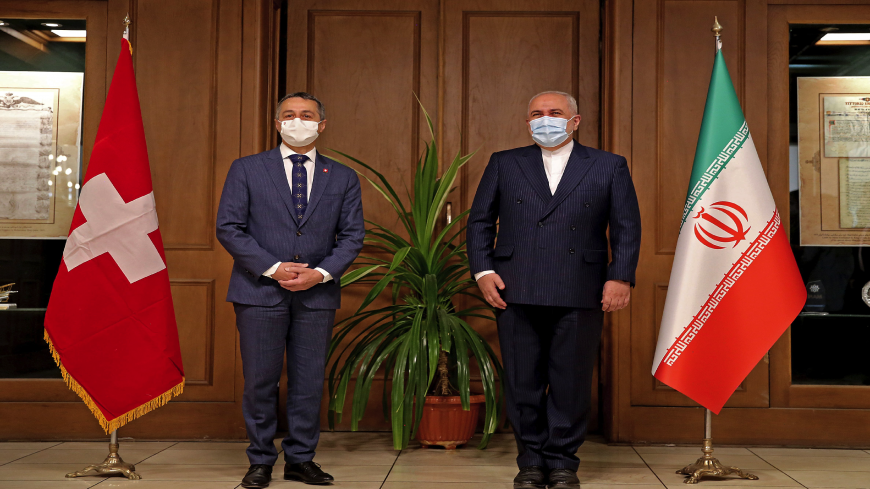 ​From behind a red strip of tape to ensure coronavirus-related social distancing, placed on a handmade Persian carpet in Iran’s presidential palace, Switzerland’s Foreign Minister Ignazio Cassis greeted President Hassan Rouhani for a meeting that marked 100 years of diplomatic ties between the two nations.

“The path is open for America to return to the JCPOA,” Rouhani said, in reference to the Joint Comprehensive Plan of Action, widely known as the Iran nuclear deal, which US President Donald Trump shredded in 2018. “We expect the friendly and free countries of the world not to resort to silence,” the Iranian president added, as he once again criticized the US economic pressure, which officials in Tehran have repeatedly lamented as “terrorism” or “economic warfare."

The immense pressure, Iran complains, is targeting its civilian population and their livelihoods. And to bypass it, the Islamic Republic has been exhausting multiple solutions, one of which is the “Swiss humanitarian channel,” officially launched in January with the aim of facilitating Iranian payments for the imports of much-needed medicines and food into the sanctions-hit country.

Rouhani called for a boost in the channel’s activity by the Swiss government, which protects Iranian and American interests on the soils of the two countries in the absence of formal diplomatic relations between the two archenemies. In a veiled mention of the same transaction corridor, Iran’s Foreign Minister Mohammad Javad Zarif also expressed gratitude for Switzerland’s efforts “to mitigate US sabotage.”

But not all statements were diplomatic niceties and compliments for the Swiss foreign minister, who was earlier seen visiting monuments in the central city of Isfahan, where he lauded Iran as the “pearl of the Middle East." The ultraconservative paper Javan appeared to downplay the traditional peace-brokering role the Swiss take pride in. “The powerless mediator,” the paper wrote, “simply plays no role beyond that of a gentle courier in charge of delivering messages.”

In recent days, speculation was rife in Iranian media that the Swiss foreign minister was on a mission to initiate a mediation process between Tehran and Washington. Iranian officials, however, have denied the theory, saying the visit had been planned a long time ago only to be postponed due to the coronavirus pandemic.

On Tuesday, Iran’s Zarif also hosted his Indian counterpart, Subrahmanyam Jaishankar, in Tehran, where the two sides — according to Zarif — exchanged views on “bilateral ties and important regional developments."

Under the US “maximum pressure” policy that aims to squeeze the Iranian economy, Tehran has been looking to New Delhi as one important savior. While Iranian crude sales to the world’s second-most populous nation have not been steady enough to satisfy the Islamic Republic, New Delhi’s $500 million investment in Iran’s southeastern strategic port of Chabahar continues to shape Indo-Iranian economic relations. Despite Tehran’s complaints about delays from the Indian side, the megaproject remains one of the few trade areas waived in the US sanctions regime, allowing New Delhi to pursue its business there without having to bite nails over Trump administration penalties.