The tankers are reportedly bringing oil to Venezuela and may be taking the longer African route to avoid US forces following a seizure in August. 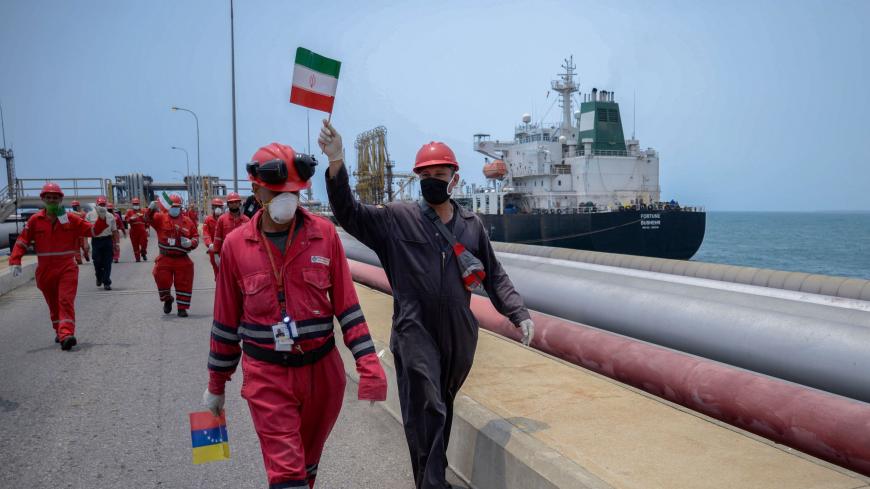 A worker of the Venezuelan state oil company PDVSA waves an Iranian flag as the Iranian-flagged oil tanker Fortune docks at the El Palito refinery in Puerto Cabello, in the northern state of Carabobo, Venezuela, on May 25, 2020. - AFP via Getty Images

An Iranian fuel tanker bound for Venezuela showed up on radar on Friday as off the coast of South Africa. Iranian fuel deliveries continue to the South American country after recent US seizures, and the lengthy route around Africa could be to avoid the US military.

The website MarineTraffic received a signal from the tanker, named Fortune, on Friday showing it off South Africa’s Indian Ocean coast.

MarineTraffic shows at least three Iran-flagged fuel tankers currently sailing, none of which have a destination listed. Fortune began in the United Arab Emirates city of Khor Fakkan and is due to dock on Sept. 21. Faxon sailed from the Iranian island Lavan and was detected off the coast of the UAE on Aug. 31. Forest left the Iranian city of Bandar Abbas on or before Aug. 9, according to the website.

On Thursday, Reuters reported that Forest and Fortune were near southern Africa’s Cape of Good Hope and heading for Venezuela. They will arrive later this month with around 300,000 barrels of fuel, according to the outlet.

The travel around Africa is notable because past routes for Fortune, Forest and Faxon to Venezuela went through the Mediterranean Sea. The US military and its NATO allies' presence in the strategic body of water has threatened Iranian fuel shipments in the past. Last year, British authorities temporarily seized the Iranian tanker Grace 1 off the coast of Gibraltar. Grace 1 was reportedly heading to Syria.

The United States maintains harsh sanctions on both Iran and Venezuela and opposes both governments. This shared status has brought the two countries closer in recent years. The United States says Iran is building a nuclear weapon, which Iran denies.

In August, the US government announced the seizure of four tankers it said were carrying Iranian fuel to Venezuela. The companies are now challenging the move in a US court. The United States has recently upped pressure on Iran and seized the websites of the companies that allegedly facilitated the attempted oil transfer to Venezuela.