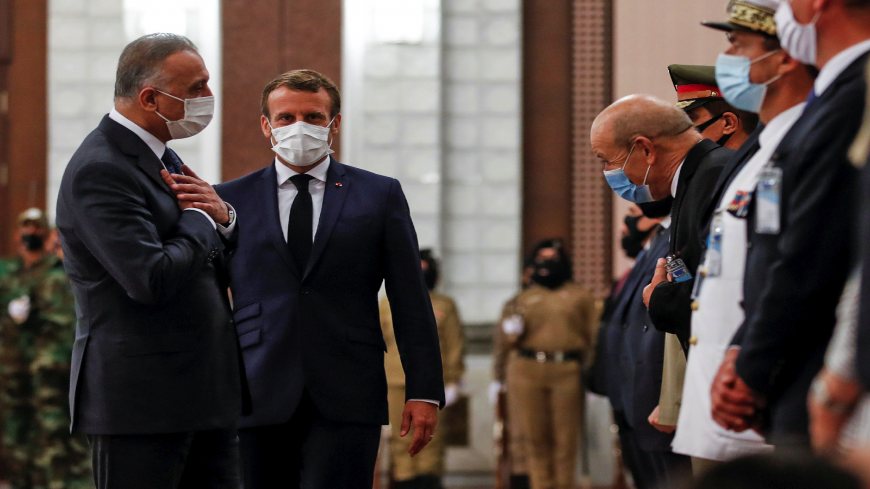 French President Emmanuel Macron arrives for a meeting with Iraqi Prime Minister Mustafa al-Kadhemi (L), in Baghdad, on September 2, 2020. - Macron landed in Baghdad on his first official trip to Iraq, where he hopes to help the country reassert its "sovereignty" after years of conflict. - Photo by GONZALO FUENTES/POOL/AFP via Getty Images

In the first visit by a Western leader to Baghdad since the country’s Prime Minister, Mustafa al-Kadhimi, was appointed in May, French President Emmanuel Macron met with Iraqi leaders on Wednesday.

The visit was held amid an economic crisis in Iraq and looming security concerns by the Islamic State (IS) and Iran-backed militias.

During a joint press conference, Iraq’s President Barham Salih called Macron a “dear friend” and noted the historical ties between the countries dating back to France’s role in Iraq forming after the dismantling of the Ottoman Empire. Macron’s Iraqi counterpart also underscored the recent definitive role that France has played in helping Iraq confront terrorism, which was a key talking point in Wednesday’s meeting.

“We don’t want Iraq to be a battleground for the conflict of others,” Salih said. “We want others to participate in achieving stability in Iraq and respecting its sovereignty and to prevent the interference in its domestic affairs.”

Macron’s daylong visit also included meetings with Kadhimi, Iraq's Council of Representatives Speaker Mohammed al-Halbousi, and Kurdistan Region President Nechirvan Barzani. Macron asked Barzani to meet him in Baghdad and not Erbil due to the short duration of his visit, which lasted only a few hours.

Why it matters:  The French leader’s session in Baghdad comes a day after his visit to Lebanon. During his time in Beirut, Macron visited neighborhoods, embraced activists, and had dinner with popular singer and cultural icon Fairuz. He even planted a cedar tree and declared the country's rebirth.

On his final night in Beirut, Macron said he was visiting Iraq to “launch an initiative alongside the United Nations to support a process of sovereignty.”

During his meetings with Iraqi leaders, Macron pledged sovereignty for the country by supporting Iraq against IS fighters and foreign influence.

“Any foreign intervention may undermine the efforts exerted by you as a government,” he said.

IS is a big concern for French officials as they are worried about a resurgence of the extremist group that would profit from political uncertainty and US-Iran rivalries, according to Reuters.

The project will be under the supervision of the International Atomic Energy Agency, he said, and it will create new jobs across the country.

What’s next:  Salih told Macron that Iraq is looking forward to a future where Baghdad will play an “essential and central role in the region.”

But that comes as the country is facing a severe economic crisis and as growing anti-corruption protests flare up again in the south.

Kadhimi is pursuing a reform agenda that includes anti-corruption initiatives, early elections, and accountability for armed groups and assassins targeting protesters and activists.

Know more:  Al-Monitor's Ali Mamouri provides an update from Iraq in this week's "On the Middle East" podcast, and Joe Snell reports on a new Iraqi committee that will report directly to Kadhimi and will manage major corruption cases and “exceptional crimes.”