Egypt called on Arab countries to adopt a unified policy to deter the Turkish interference in the Arab region, especially in Libya, Syria and Iraq. 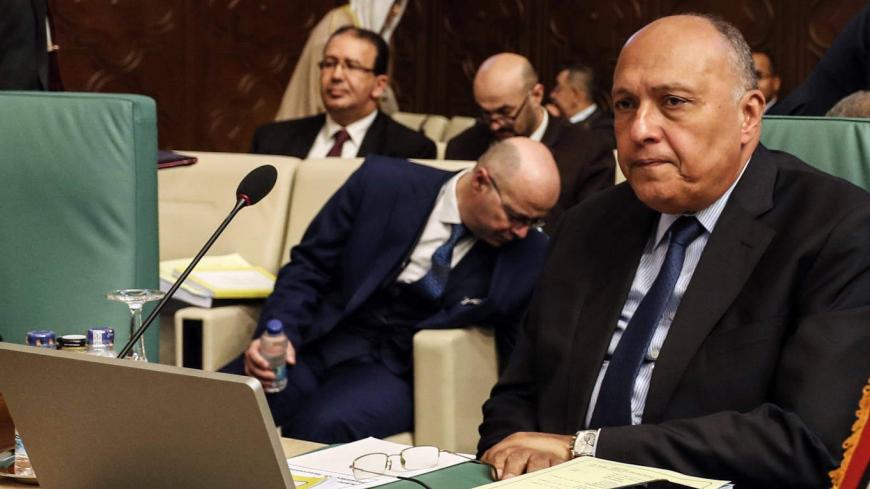 CAIRO — Egypt last week called for a unified and firm Arab policy against Turkey through closer cooperation among Arab states.

Egyptian Foreign Minister Sameh Shoukry told the Arab League on Sept. 9 that blatant Turkish practices and interventions in multiple Arab countries are the most significant emerging threats to Arab national security. He said Turkey was facilitating access of tens of thousands of terrorists and mercenaries to Syria, deploying thousands of fighters to Libya and exploiting the Arab peoples’ resources in Iraq and Libya through illegitimate agreements.

In its closing statement Sept. 10, the Arab League denounced the Turkish interventions in Arab countries (Syria, Libya and Iraq), and called on the Turkish side “not to meddle in the Arab countries’ internal affairs and to halt its provocative actions that would sabotage trust and pose a threat to the region’s security and stability.”

Qatar, Libya, Somalia and Djibouti, however, abstained from voting on the statement.

Turkey denounced the Arab League statement in a Sept. 10 press release by its Foreign Ministry that said, “These decisions lack any context to be taken seriously. … Turkey attaches utmost importance to the preservation of the territorial integrity and the political unity of the Arab countries, as well as regional stability, and exerts efforts for their protection,” unlike some Arab countries that only care about their own agenda.

Ahmed Youssef Ahmed, a former dean of the Institute of Arab Research and Studies in Cairo, told Al-Monitor by phone that it is good to call for a unified Arab policy, but that there are challenges to the implementation of such a policy, particularly since there are varied Arab positions toward Turkey's intrusive policy in the region.

He said that while Egypt condemns this interference and draws red lines, there are other Arab countries, such as in North Africa, that do not have the same position, as they neither support nor oppose Turkish interference. Also, there are two Arab countries that are against any measure that would be taken against Turkey, namely Qatar and Somalia, he added.

Ahmed indicated that the Turkish intervention caused direct damage to a number of governments, namely Egypt, Syria, Iraq and Libya's eastern-based government, and added that it would be a good start if Arab countries agreed with Saudi Arabia and the United Arab Emirates on a unified policy against Turkey.

He stressed the need for the affected countries to adopt a unified and comprehensive diplomatic position against Turkey, saying it is about time to examine Arab trade volume with Turkey. He said he believes Turkey would suffer major damage if Arab countries coordinated to reduce trade volume or impose economic sanctions on Turkey.

The volume of trade between Arab countries and Turkey amounts to nearly $50 billion per year, said Rashid al-Athba, vice president of the Qatar Chamber, at a joint meeting of the Arab and Turkish chambers of commerce in Antalya, Turkey, on Sept. 11.

Abdel Moneim Saeed, a former director of the Al-Ahram Center for Political and Strategic Studies, agreed. He told Al-Monitor by phone that in order to have a unified Arab strategy, Arab countries need to agree that Turkish policies threaten their national security. That would start a dialogue between Arab countries and lead to a strategy to deal with Turkish interference, he added.

Turkish military forces are present in Libya in support of Prime Minister Fayez al-Sarraj of Libya's Government of National Accord, claiming that they seek stability in Libya. They are also present in northern Syria, and control some towns and areas adjacent to the Turkish border, and support Syrian opposition factions in Idlib. Also, Turkish special forces are deployed in northern Iraq, as a part of Operation Claw-Tiger against Kurdish militants.

Saeed added, “No one wants to engage in large-scale military clashes. Yet Turkey and Iran are openly using military force, and Turkey is using religion to form armed organizations that serve its interests in Arab countries.”

Tariq Fahmy, a professor of politics at Cairo University, told Al-Monitor that the only way to develop such a strategy is for that all Arab countries to agree on how to deal with Turkish policy in the region, adding that there are Arab governments that continue to maintain good relations with Turkey, such as Qatar, Algeria, Libya’s Sarraj-led government and Sudan.

Fahmy said there is need to focus on the security dimension of Arab countries and the region as a whole, and that there is agreement that there is a Turkish intrusive policy in the entire region, especially in Syria, Iraq and Libya.

He pointed to the need to not separate the economic and political dimensions when dealing with Turkey, given their correlation, and to try to use economic policies to serve political interests.

Fahmy stressed that Arab countries need to communicate with all political forces inside Turkey, and to activate the Arab League role, considering it to be the Arab voice when communicating with these forces.