Al-Monitor spoke to Israelis and Americans involved in police exchanges between the countries in response to far-left allegations they teach harmful practices. 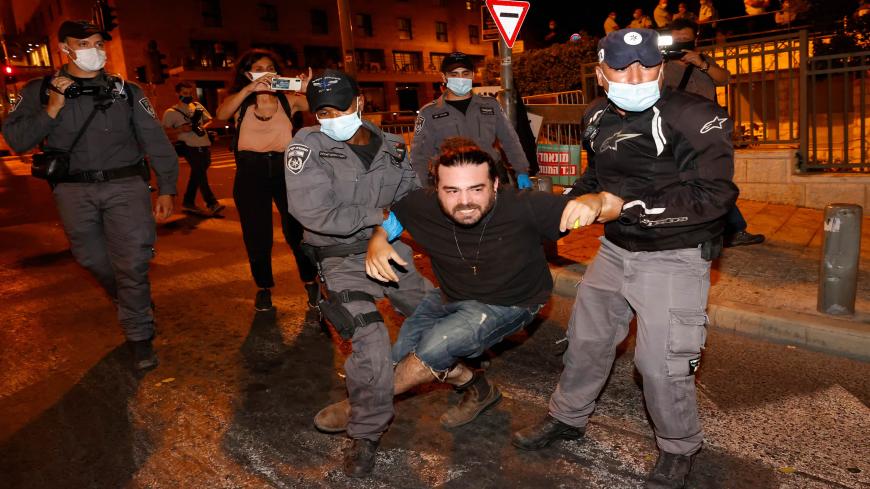 Police remove protesters blocking a main road during a demonstration against the Israeli government near the prime minister's residence in Jerusalem, Aug. 16, 2020. - JACK GUEZ/AFP via Getty Images

Black Lives Matter protests and some far-left and anti-Israel groups are calling for an end to police training exchanges between US and Israeli police, prompting participants in such programs to speak out.

Since George Floyd's death in Minneapolis in May, media outlets and pro-Palestine organizations have sought to connect controversial restraint, crowd control and other tactics utilized by US police to Israel. They allege that Israeli security forces taught US police how to put down protests and use chokeholds.

The idea that long-standing concerns about systemic racism and controversial US police practices could be linked to Israeli training programs is questionable. But the allegations gained some traction on the left and that has produced a strong counter-reaction from police.

Simon Perry, a professor at the Hebrew University of Jerusalem and a 30-year veteran of Israeli law enforcement who has been involved in US-Israel police exchanges, said he and other experts focused on counterterrorism. He blames the boycott, divestment and sanctions (BDS) movement, which supports a variety of boycotts of Israel, for its policies spreading misinformation in Israel's security relationship with the United States.

“You hear all this BDS nonsense — it’s really insulting,” Perry told Al-Monitor. “‘Don’t overreact.’ That’s the one rule we preach here. We paid with a lot of blood in these lessons and it’s very frustrating that we’re being accused of something.”

Participants in US-Israel police programs agree with Perry that the focus of exchange programs is on counterterrorism and exchanging ideas on best practices — not riot control and chokeholds.

Trainings and exchanges involving US and Israeli police accelerated after the Sept. 11, 2001, attacks when US police sought Israeli expertise in counterterrorism. Thousands of US police have participated in such programs in both countries and Israeli police have also come to the United States to learn. Police brutality was an issue in the United States long before the exchanges began, including during the civil rights marches of the 1960s when the authorities used powerful water hoses to disperse Black protesters.

The assertions that Israeli tactics might have influenced US police behavior arose after Floyd, a Black man, died following his arrest by Minneapolis police officers.

The London-based news outlet Middle East Eye ran several articles comparing US police’s actions in Minneapolis to Israeli security forces’ against the Palestinians. One Palestinian in Minneapolis told the outlet that the tear gas used against the protesters in the city reminded him of Palestine. Another article included photos showing Israeli soldiers kneeling on the necks of Palestinian suspects in a way that mirrored former officer Derek Chauvin kneeling on Floyd.

GILEE organizes meetings between US police departments and police around the world. During a Zoom event in late July, Demilitarize From Atlanta 2 Palestine claimed that GILEE, which includes Israeli police among its exchange partners, teaches “some of the most violent policies, behaviors, and tactics of the state” and “mass surveillance, policing, incarceration.”

Criticisms of US-Israel police relations are not new. In 2016, Amnesty International published an article noting that police in Baltimore — where a Black man named Freddie Gray died after being arrested in 2015 — trained in Israel. The leading human rights organization did not include evidence of what Baltimore police learned there.

Recent critics have not cited ample evidence to show American police are adopting tactics from Israel that result in violence. The Americans and Israelis who participate in such exchanges say that the focus is not on riot control or controversial restraint techniques.

“One thing we never dealt with is riot control,” Perry said. “I don’t think we have anything we can teach American law enforcement in this field.”

Perry has trained a variety of law enforcement officials in counterterrorism, including members of the FBI.

“The first objective of terrorism is to attack society’s resilience,” he said. “You want to collect a lot of intelligence, but you don’t want to harm uninvolved people. [If you do] you actually create a larger problem.”

On restraint tactics, he said he only taught how to detain suicide bombers and the faulty homemade explosives they use. “If you shoot at it, it will explode, so that’s exactly what you don’t do,” he noted. “You have to surround them in an open area and keep a distance.”

Brent Cummings is a retired US Army colonel who is the associate director of GILEE. He said GILEE does not teach “violent policies” as its critics say. “The focus is on law enforcement executive leadership development promoting peer-to-peer experiential learning and exchange of best practices,” Cummings told Al-Monitor. “GILEE is not a police academy and does not train officers.”

Cummings said that their exchanges allow officers to discuss a range of topics, including recruitment, promotion and community service. Their mission is not limited to Israel and they have programs with numerous other countries.

Cummings is not alone in his thinking. Former NYPD Commissioner William Bratton told Israel’s Ministry of Public Security that he discussed culturally sensitive policing, recruitment and the use of technology with Israeli law enforcement during a 2014 visit, according to an Israeli government archive.

GILEE does not facilitate trainings in chokeholds or crowd control, according to Cummings, who called this “a propagandist charge that is unfounded.”

Israelis have learned about policing in the United States as well during GILEE’s exchanges.

“Israelis — like all visitors who have centralized government — feel challenged to understand the idea and practice of home rule and the power of local government,” Cummings noted.

Much has been made of what Israeli police teach their American counterparts, but Israel actually follows US and other Western models on some police matters.

David Weisburd teaches criminology at George Mason University and the Hebrew University of Jerusalem. A recent article he co-wrote analyzed Israel’s EMUN program, which was based on the principle of problem-oriented policing. This is a crime reduction strategy that seeks to identify and solve problems in a community as a means of fighting crime.

EMUN was a nationwide program in Israel that followed earlier problem-oriented policing models in New York and Australia.

The Israel police is the civilian police force for all of Israel. The United States, with its thousands of separate police departments, is a world innovator in policing in a way that is hard to match in Israel’s centralized police, according to Weisburd.

“The US has 15,000-20,000 separate police departments and they operate independently to a great degree,” Weisburd told Al-Monitor. “There’s tremendous innovation. It’s hard in systems like Israel where you have a single system.”

The fatal shooting of Iyad Hallak offers a clear parallel between policing issues in both countries. Hallak, an unarmed autistic Palestinian from Jerusalem, was shot and killed by Israeli border police in May. The police mistakenly thought he had a weapon. The incident led to outrage and inspired Palestinian Lives Matter protests in Israel.

Israel’s border police shot Hallak. This force operates in Jerusalem and the West Bank in addition to Israel’s borders. The unit is known for having many Druze officers and has participated in some US-Israel police exchanges.

“There’s been more criticism of the border police,” Weisburd added. He said there are notable differences to consider when comparing Israeli and American police; rate of gun violence is much higher in the United States than in Israel.

“America is a society where there’s tremendous violence,” he said. “Look at the number of Israelis who have been in the custody of the police and died. It’s a very small number compared to the US.”

Critical reports on US-Israel police exchanges also shed some light on the relationship. The pro-BDS group Jewish Voice for Peace published an in-depth report titled “Deadly Exchange” on US-Israel police ties in 2018, but some of their findings are disputed.

A 2015 report from the department touted its recent exchanges with Israeli police, but did not credit Israel for establishing the Video Integration Center in the section on the center’s progress.

The Associated Press conducted extensive research on this in 2011. One of the articles cited a former police official saying the program was based in part on Israeli operations in the West Bank. The outlet also reported that the CIA was heavily involved in helping the NYPD with intelligence gathering following the Sept. 11 attacks.

Jewish Voice for Peace also said that the NYPD’s Ring of Steel surveillance network is related to Israel’s surveillance systems. A New York Daily News article cited by Jewish Voice for Peace said that in 2013, Israel’s then-Police Chief Yochanan Danino visited the NYPD to learn from New York police officers about community relations, discuss counterterrorism and tour the Ring of Steel. In 2007, the American Civil Liberties Union said that the Ring of Steel is based on a system in London.

On crowd control, Jewish Voice for Peace cited a report from the Center for Investigative Reporting that included a quote from a US police officer saying he learned crowd control techniques from Israeli forces on a 2013 trip.