Turkish politicians are expressing outrage over presumptive US presidential candidate Joe Biden calling for the Turkish president's ouster back in December, likely because Recep Tayyip Erdogan is using them to whip up nationalist fervor against the United States. 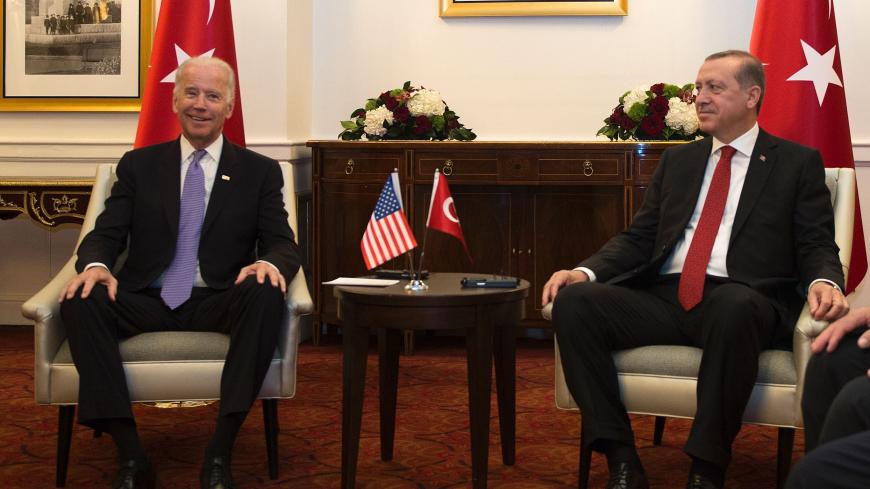 US Vice President Joe Biden (L) attends a meeting with President Recep Tayyip Erdogan of Turkey on the sidelines of the nuclear summit in Washington, DC, on March 31, 2016. - ANDREW CABALLERO-REYNOLDS/AFP via Getty Images

The furor over comments by presumptive US Democratic presidential nominee Joe Biden in December — in which he called Turkish President Recep Tayyip Erdogan an “autocrat” and said he would help his opponents to replace him — shows no signs of abating, even though the former vice president made them so long ago. “You are no match for this nation, you brazen man!” howled the pro-government daily Yeni Safak today. “Know your place,” warned Yeni Akit, another government mouthpiece.

They were taking their cues from Erdogan’s lieutenants. His head of communications Fahrettin Altun said Biden’s words reflected an “interventionist approach” toward Turkey. “No one can attack our national will,” he fumed. Presidential spokesman Ibrahim Kalin vented via Twitter, saying, “The days of ordering Turkey around are over,” and that those who dared do so would “pay the price.”

In his remarks during a round table with New York Times editors on Dec. 16, Biden had also taken aim at President Donald Trump’s order for US special forces to withdraw from Syria’s border with Turkey, paving the way for Turkey’s October 2019 assault against the US-backed Syrian Kurdish People’s Protection Units. “The last thing I would’ve done is yielded to [Erdogan] with regard to the Kurds. The absolute last thing,” Biden said.

All of this will have reinforced Erdogan’s long held view that not only had the Barack Obama administration backed the failed 2016 coup to violently overthrow him but that its decision to support Turkey’s Syrian Kurdish foes militarily was part of the alleged plan.

Embarrassed opposition leaders swiftly denounced Biden, saying they wanted nothing of his help. Kemal Kilicdaroglu, the chairman of the pro-secular main opposition Republican People’s Party, said, “We do not accept even the shadow of any imperial power.” Yet amid all the indignation, feigned or real, some observers are questioning why the video is making the rounds eight months after it was published by the New York Times.

After all, Erdogan and his cabinet hardly uttered a peep when Trump threatened in an Oct. 9 letter to Erdogan to “destroy” the Turkish economy if he carried his invasion of northeast Syria too far. History, he wrote, “will look upon you forever as the devil if good things don’t happen. Don’t be a tough guy. Don’t be a fool.”

The conventional wisdom is that Erdogan is using Biden to whip up nationalist fervor against the United States to further deflect attention from the country’s deepening economic problems, compounded by an alarming rise in new COVID-19 cases. While this fits with Erdogan’s pattern of igniting controversies to that end, there is little doubt that the prospect of a Biden presidency is raising alarms in Ankara. Thanks to the good personal chemistry between Trump and Erdogan, Turkey has managed to fend off the worst of congressional sanctions over its purchase of Russian missiles. Biden may prove less obliging.

Asli Aydintasbas, a senior fellow at the European Council on Foreign Relations who closely monitors Turkey’s relations with Washington, believes such thinking is overwrought. Aydintasbas told Al-Monitor in emailed comments, “I do not believe US policy will fundamentally change under Biden, though there would more of an emphasis on human rights and democracy. Publicly and privately Trump made it very clear that he did not care whatever happened inside the country, as long as he could establish a give and take with Erdogan.”

Aydintasbas predicted, “That is likely to change but not dramatically. A Biden administration would still do business with Erdogan and try to cajole him to keep Turkey in the Transatlantic fold. I do not expect a radical departure. Turkey is too important and too critical to US strategic interests.”

She went on, “Yes, the government is hyping up the Biden comments to further feed the domestic narrative that Turkey is surrounded by enemies who want to topple President Erdogan and that its economic woes are not self-made but an attack from abroad. This does tend to work with Erdogan’s base but not really beyond.”

It may be that Biden is electioneering too. Gonul Tol, the director of the Middle East Institute’s Turkey program, contends that the domestic policy debate has become so closely intertwined with foreign policy under Trump that it's natural that Biden will attack him over authoritarian regimes he is accused of coddling: Russia and Turkey.

“Trump’s opponents are vowing to do the opposite, to pressure these countries and their leaders on human rights. And while foreign policy is clearly not top of the agenda during this campaign, when it does come up it's three countries — Russia, China and Turkey — that are seen as the biggest headaches,” Tol told Al-Monitor in a telephone interview. Turkey’s October assault against the Kurds roused Congressional ire that cut across bipartisan lines, she recalled.

Either way, history has so far shown that pragmatism will likely prevail, despite the angry noises emitting from both capitals. “Many in Biden’s foreign policy team worked closely with Ankara during the Obama years and established good relations,” Aydintasbas observed. “If Biden comes to power, President Erdogan will say ‘My friend Joe Biden’ and the two will find a way to work together,” she said.