Turkey’s president is on his way to Washington in a bid to salvage battered ties, but despite his positive chemistry with the US president, the Turkish leader is likely to hit a wall. 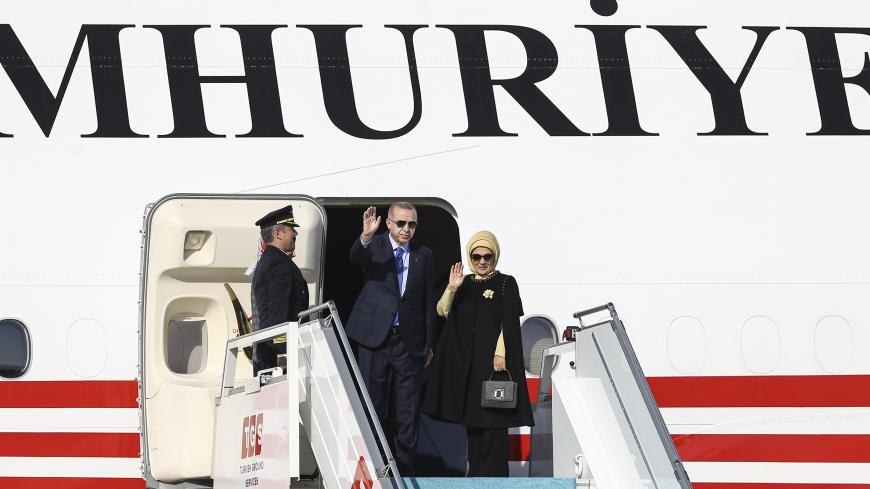 Turkish President Recep Tayyip Erdogan and his wife Emine Erdogan are seen before their departure to Washington from the Esenboga Airport in Ankara, Turkey, Nov. 12, 2019. - Ercin Top/Anadolu Agency via Getty Images

Turkey’s President Recep Tayyip Erdogan took off for Washington today where he will be meeting President Donald Trump in a bid to salvage battered ties. But few expect that the encounter will resolve any of the issues bedeviling relations between the NATO allies that have hit an all-time low in the wake of Turkey’s Oct. 9 assault against a US-backed Syrian militia. Coming on the day that impeachment proceedings against Trump will start, it could even make things worse.

Erdogan told reporters before his departure that Fethullah Gulen, the Pennsylvania-based Turkish cleric accused of masterminding a failed 2016 attempt to bloodily overthrow the Turkish leader, would top the agenda. “Turkey took several steps and will continue doing so for the extradition of the terrorist leader in Pennsylvania.”

Despite his positive chemistry with Trump that has helped to tide over relations so far, the Turkish leader is likely to hit a wall. Turkey has been pressing for Gulen’s extradition, but the evidence it's provided to support the coup claims have failed to persuade the Justice Department.

Gonul Tol, the director of the Middle East Institute’s Turkey program, told Al-Monitor, “I don’t expect much to come of this meeting. The US side will pressure Turkey to scrap the [Russian] S-400 missile deal. But it doesn’t seem likely that Turkey will change its position. At most it can delay delivery of the [remaining] batteries or activation of the system.”

Turkey’s acquisition of the Russian missiles is a huge source of friction leading the United States to freeze delivery of state-of-the-art F-35 fighter jets on the grounds their security is compromised by the Russian anti-aircraft system. Congress is now pushing for Turkey to be sanctioned under the Countering America’s Adversaries Through Sanctions Act and Trump can only demur for so long, especially if Erdogan does nothing to strengthen his hand.

And it's only a matter of time before the Treasury fines Turkey’s state lender Halkbank over its central role in a sanctions-busting scheme to help Iran, prosecuted in a New York Court. Trump has shielded Turkey so far but in October, the Justice Department unsealed an indictment that will likely force his hand. Erdogan, whose electoral standing has suffered in the economic downturn, is desperate for a reprieve.

“From Erdogan’s perspective, apart from the photo op, the most important aspect of the visit would be getting assurances from Trump that the Halkbank case in New York’s Southern District Court won’t go far and a promise to push back against calls for sanctions in Congress. Trump, vulnerable and erratic, might not be able to deliver,” wrote Asli Aydintasbas, a prominent Turkish commentator in today’s Washington Post.

Congress wants to place an arms embargo on Turkey and investigate Erdogan and his family for corruption. Today, Senators Edward J. Markey (D-Mass.) and Ron Wyden (D-Ore.) announced they would introduce new legislation “that condemns the Turkish government’s abuse of counterterrorism authorities to target political rivals.” Boston Celtics center Enes Kanter, an open Gulen disciple, will be present for the markup, they said. The move is likely to provoke a fresh outpouring of conspiracy theories in Turkey whereby the United States was the secret hand behind the abortive putsch. Turkish prosecutors have issued a warrant for Kanter’s arrest.

Erdogan is also unlikely to make much headway with another declared goal, to get the United States to classify the People’s Protection Units (YPG), the Kurdish group that forms the backbone of the US-backed Syrian Democratic Forces (SDF), as terrorists and end its alliance with them.

Tol said the Americans “simply cannot do it because they do not have enough forces on the ground and need the YPG. But Erdogan has to give it a shot nonetheless because Trump is his sole trump card in Washington.” Tol noted, however, that “it's a sticky situation for Trump as well because if the meeting goes really well for Turkey, this could further inflame the Congress, which wants to punish Turkey. Trump has to walk a fine line. On the one hand he has to look tough but at the same time he has his personal business with Turkey.”

Giran Ozcan is the Washington representative of the People’s Democratic Party, the largest pro-Kurdish party in Turkey whose members have been jailed in the thousands. He agrees that the meeting is ill timed, telling Al-Monitor, “There’s a slow motion car crash in the making because neither leader has a domestic audience that supports the meeting to begin with. So, they will need to get the one up on the other, to salvage their domestic prestige.”

Erdogan’s other ask is for Washington to ditch Mazlum Kobane, the Syrian Kurdish commander of the SDF who is on Turkey’s most-wanted terrorist list because of his links to Kurdish insurgents fighting the Turkish army inside Turkey.

The Pentagon, where antagonism for Turkey runs deepest, has vowed to pursue its alliance with Kobane and the SDF primarily to root out Islamic State remnants and their efforts to regroup, and Trump has agreed. It's a reversal of Trump’s earlier order for a full withdrawal. That order followed an Oct. 6 call with Erdogan and was widely seen as a green light for Turkey’s subsequent invasion.

The operation dubbed Peace Spring achieved Turkey’s objective to push the militia YPG away from its borders. US forces co-located with them have since redeployed to oil fields near the Iraqi border. Russian military police and Syrian government forces have filled the vacuum. But it's not been great for Turkey. Turkish and Russian forces conducting joint patrols on the Syrian side of the border in line with an Oct. 22 deal inked by Erdogan and Russia’s Vladimir Putin have been pelted with rocks by angry crowds. Things turned even uglier today when Turkish forces fired live rounds at protesters near the mainly Kurdish town of Kobani.

The UK-based Syrian Observatory for Human Rights said two people were killed and seven others were injured as Turkish forces sought to disperse the crowd through force. SDF spokesman Mustafa Bali tweeted, “Turkish army is firing live bullets on Kurdish protesters and killing them in broad daylight.” The report could not be independently verified.

Sunni opposition rebels fighting alongside Turkish troops have committed what US officials have termed probable war crimes and ethnic cleansing in northern Syria.

Ozcan, whose party is among the rally’s organizers, said he expects “hundreds if not thousands” to attend. “It's the first time that it won’t be just Kurds but a large number of Americans protesting Erdogan,” he said, adding, “I don’t think Turkish officials would be stupid enough to allow the violence to be repeated.”

But Andreas Akaras, an attorney for the plaintiffs, cautioned, “Erdogan and everyone around him have proven to be deeply unpredictable. Each each time we’ve said 'no he can’t do this, he can’t go that far,' he has. We have to be in a heightened state of vigilance.”

As for the case, “it is proceeding at a pace that we expected and we continue to feel optimistic and confident and more than that, we are determined to pursue justice, not only because of the nature of the insult to the victims but the fact that this was an insult to the American people. Erdogan came to the White House, to the people’s house and acted like a thug who breaks the furniture and doesn’t acknowledge it and comes again.”

An unfazed Erdogan said he expected “the truth about Turkey to be revealed” and for the smear campaign against his country to be recognized for what it is.