Syria could have 2 million cases of coronavirus by Aug. 31

Analysts believe there could be up to 2 million coronavirus cases in Syria, but the authorities are no way near reimposing restrictions to curb the spread of the virus. 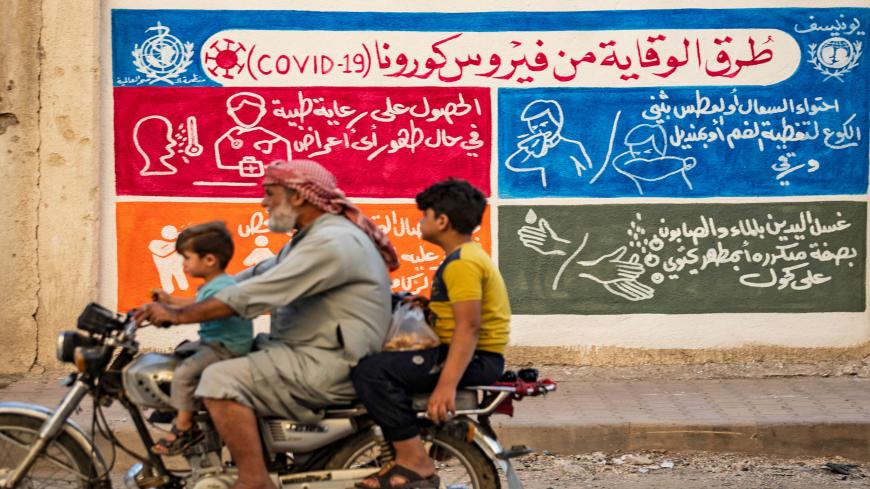 Syrians ride a motorbike past a mural painted as part of an awareness campaign by the UNICEF and the World Health Organization, bearing instructions on protection from the coronavirus in the Kurdish-majority city of Qamishli, Hasakah province, Syria, Aug. 16, 2020. - DELIL SOULEIMAN/AFP via Getty Images 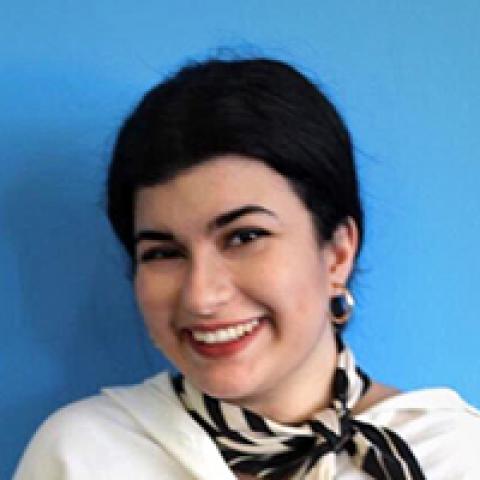 DAMASCUS, Syria — Wesam Kanaan tried to get his colleague's father admitted to a hospital in Damascus Aug. 13, but to no avail. The 80-year-old man who had contracted the coronavirus died the following morning.

“We received a call from a colleague asking us to help her with her 80-year-old father. He was a coronavirus patient and she felt that he needed to go to a hospital immediately,” said Kanaan, a Syrian journalist and writer.

He told Al-Monitor, “We reached out to several public and private hospitals, but it was an impossible mission even though we used our contacts from high-profile artists and figures.”

The Syrian government claims that the coronavirus cases in the country stood at 1,764 on Aug. 17, with 425 recovered cases and 68 deaths. But many signs indicate that the real numbers are much higher.

The burial bureau in Damascus announced July 29 that 133 people had died in Damascus, compared to 25-35 daily deaths in previous years. In addition, the deputy health director of Damascus implied that in Damascus and rural Damascus the number of coronavirus cases stand at 112,000.

Since doctors and health officials are reluctant to report the real numbers, various officials and public figures are commenting on the uncontrollable situation in the country. Ahmad Rafeh, a well-known actor who was diagnosed with the virus that causes COVID-19 and was treated at a public hospital, said in an Aug. 9 interview that there are about 60 daily deaths related to the virus.

Despite the absence of reliable data, a policy memo released by the London School of Economics and Political Science (LSE) anticipates that the current infection rate could lead to 2 million cases in the country by the end of August.

The policy memo provides four different scenarios, specifically for the month of August, where the number of cases can vary according to containment measures and public awareness. It also estimates the actual number of currently infected cases to be around 35,500.

In the first scenario, public awareness slowly increases but no effective containment measures would be adopted by the government, leading to a macro-level spread of 2 million cases and 119,000 deaths.

“The Syrian government should impose a complete lockdown including the closure of all economic activities except the essential ones,” Zaki Mehchy, a researcher at LSE and leading author of the memo, told Al-Monitor. “In fact, the government did adopt strict mitigation measures in April for a few weeks when the number of cases was still relatively low. But it seems that the government has its reasons not to implement such measures again now."

It seems that given the current situation, the two applicable scenarios are either scenario 1 or scenario 4, given that the government still withholds to apply the needed measures.

Scenario 4 suggests phased progress that includes the three scenarios. In this scenario, the number of cases can reach 449,000 with 24,100 deaths.

“Scenario 1 is based on this strong assumption as the basic reproductive number is changing not only with strict preventive measures but also with higher awareness among people,” Mehchy noted. “This is exactly what’s happening now in Syria — mainly in big cities — the majority are wearing facemasks and avoiding direct contact. So shifting to scenario 4 is possible with a better awareness and commitment of Syrians.”

The authors also recommend an international response to the current situation, where international aid can be directed to the “less politicized” civil society, compared to Syrian local authorities.

Despite the fact that aid to the health sector is not affected by the economic sanctions imposed on the country, Mehchy said that such a response can still face several challenges.

“Many providers prefer to avoid the risk of dealing with Syria. That's why there is a need for parallel structures and financial channels that are monitored and secured to directly support civil society initiatives inside Syria without legitimizing the regime,” he added.

While the policy memo only forecasts possible scenarios for August, the government’s failure to effectively contain the spread can only be a sign of a catastrophic health crisis in the country.

It is no surprise for Syrians that major hospitals are not able to admit new cases. The wrecked health sector was severely affected by the conflict.

According to another policy memo released by LSE, there are only 325 available ICU beds with ventilators in the country. While most of them are located in Damascus (96) and Lattakia (77), some cities only have a few or even none — Aleppo (5) and Deir ez-Zor (0).

While the hospitals in Damascus are overwhelmed with COVID-19 cases, local initiatives in the city are increasing their public services as an alternative. AKMHA, an independent youth-led initiative, has been providing portable oxygen ventilators for free to those in need, along with medical support and counseling.

Since the spike in coronavirus cases a few weeks ago, several local organizations have been working to provide the needed care for COVID-19 patients in Damascus and rural Damascus.

The Syrian authorities confirmed the first coronavirus case on March 22, and followed this announcement with a series of strict preventive measures, which were lifted in April for economic reasons.