The FBI will lend its expertise to the investigators probing the explosion that killed at least 172 people in Beirut last week, US Undersecretary for Political Affairs David Hale said today in the Lebanese capital. 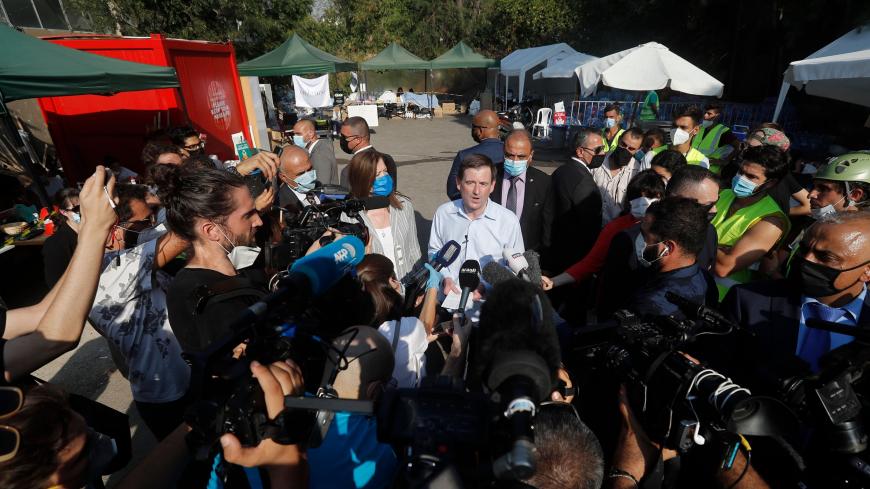 US Undersecretary of State for Political Affairs David Hale speaks to journalists as he visits the main gathering point for nongovernmental organization volunteers near the site of last week's explosion that hit the seaport of the Lebanese capital, Beirut, on Aug. 13, 2020. - HUSSEIN MALLA/POOL/AFP via Getty Images

The FBI will lend its expertise to the investigators probing the explosion that killed at least 172 people in Beirut last week, US Undersecretary for Political Affairs David Hale said today in the Lebanese capital.

Hale, the highest ranking US official to visit Beirut since the blast, said the FBI would be joining Lebanese and foreign investigators at the invitation of the Lebanese government.

“I’m with you. I stand with you, my government does, and the American people do,” the senior diplomat said while touring the destruction in east Beirut’s Gemmayze neighborhood.

Why it matters: Lebanese officials are running their own investigation and have taken a number of port and customs officials into custody for questioning. But a chorus of foreign governments have called for a more credible, independent probe of the blast, which Lebanese authorities say was caused by some 2,700 tons of highly explosive ammonium nitrate stored unsafely at Beirut’s port since 2014.

An outside investigation is also a leading demand of the protesters who have taken to Beirut’s streets in recent days, most of whom blame long-running government negligence and corruption for the blast. Under growing public pressure, Lebanese Prime Minister Hassan Diab and his ministers resigned Monday, but will stay on in a caretaker role until a new government is formed.

What’s next: During his three-day trip to the small Mediterranean country, Hale will push for structural economic and political reforms, as well “introducing widespread state control through functioning institutions,” per a statement from the US Embassy in Beirut.

His call for reform echoed that of other donor governments who say future aid to Lebanon should be tied to lasting political change. The United States announced last week it was sending over $17 million in initial relief aid to Lebanon and that announcements of additional assistance were to be expected.

Know more: Fehim Tastekin explains why Lebanon won’t be as welcoming of Turkey’s role in the crisis as it was of France’s Emmanuel Macron. Rina Bassist provides a look at how Israeli Prime Minister Benjamin Netanyahu is leveraging the Beirut crisis to go after rival Hezbollah.