Israel and the United States are campaigning for the United Nations Interim Force in Lebanon's mandate to be revised, empowering the force to eject Hezbollah from south Lebanon. 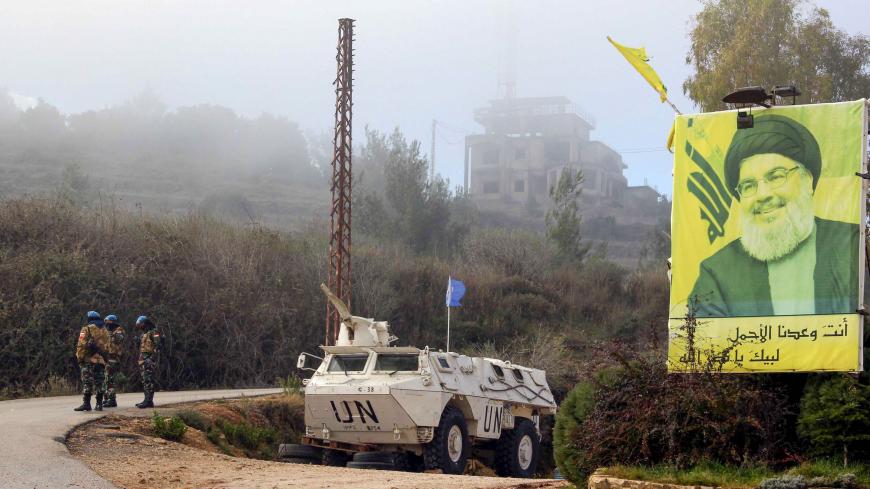 A United Nations Interim Forces in Lebanon (UNIFIL) armoured vehicle is parked under a portrait of Hezbollah leader Hassan Nasrallah on a side road in the southern Lebanese town of Kfar Kila near the border with Israel on Jan. 3, 2020. - ALI DIA/AFP via Getty Images

Gilad Erdan, Israel’s new ambassador to the United Nations, filed a formal complaint Aug. 17 with the United Nations Security Council over a July 27 incident along the Lebanese border, in which IDF soldiers foiled an attack by Hezbollah.

Tensions on the Israel-Lebanon-Syria borders have been high since July 22, when Hezbollah operative Ali Kamel Mohsen Jawad was killed in an airstrike near the Damascus International Airport. Hezbollah blamed Israel for killing its operative, declared him a martyr and pledged to avenge his death. The attack near the Lebanese border fence was apparently in retaliation, though Israel had related messages that Mohsen had not been purposely targeted. A Hezbollah cell of three to five operatives crossed the Blue Line a few meters into sovereign Israeli territory. Israeli troops then opened fire at the group, which fled back into Lebanon. Later, Israeli soldiers found explosives and ammunition left behind by the cell, which had apparently planned to set up explosives targeting IDF troops.

In the complaint to the UN, Israel said the Hezbollah cell was armed with a .50-caliber sniper rifle, which was recovered at the scene along with military fatigues. Erdan presented evidence that Hezbollah operatives had entered into Israel and a map of the route of the border breach. “Today I sent a letter to the UN Security Council containing intelligence proving that Hezbollah terrorists recently infiltrated into Israel. Hezbollah’s leader [Hassan] Nasrallah has consistently lied about this. His terrorist group’s operations will lead to disaster for Lebanon," he said.

Erdan took issue with the United Nations Interim Force in Lebanon peacekeepers, noting, “UNIFIL is supposed to prevent such infiltrations. If it cannot stop Hezbollah from turning southern Lebanon into a terrorist base, then its purpose must be questioned. To be effective, its mandate must include expanding access and oversight into areas where Hezbollah operates.” Erdan also noted that Israel and the United States were working to alter UNIFIL’s mandate to give it additional access to the area.

Jerusalem has been campaigning for several months for the Security Council to renew and expand the UNIFIL mandate. UNIFIL currently operates in the framework of Resolution 1701, which ended the 2006 Second Lebanon War. The resolution forbids the presence of armed groups in the south of the country, and UNIFIL is tasked with ensuring that the resolution is upheld. Israel and the United States have been claiming for years that the UN mandate prevents UNIFIL from achieving its directives, as it is barred from entering private property to search for ammunition and weapons without permission — a loophole exploited by Hezbollah.

Speaking at an Aug. 12 discussion at the Security Council, US Ambassador to the UN Kelly Craft was quoted as saying, "The US has long reiterated publicly and privately that the status quo in Lebanon is unacceptable. Now is the time to empower UNIFIL, end the long complacency and enable the mission to fully achieve what it was set out to accomplish.” A draft resolution reportedly being prepared by France will probably be presented for vote by the end of the month, before the mandate expires on Aug. 31.