After a weekslong battle, foreign yeshiva students will be allowed to enter Israel with lenient quarantine requirements. 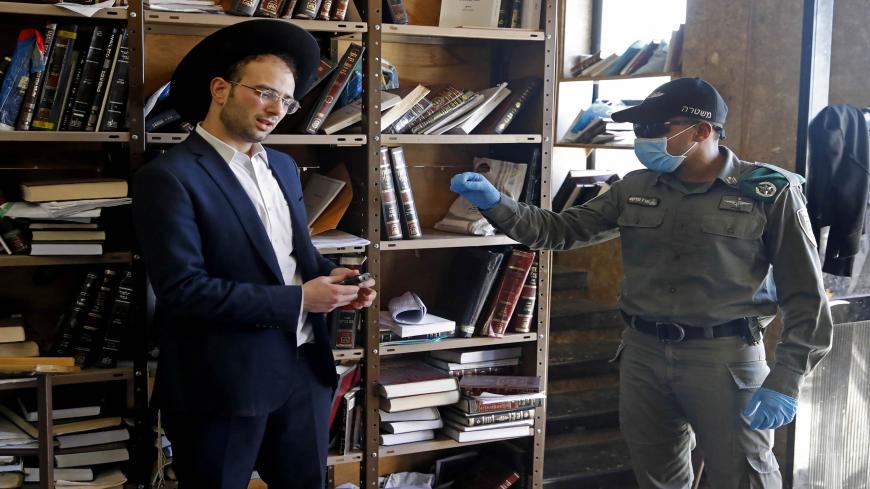 An Israeli police officer, dressed in protective outfit, speaks to a yeshiva student in the city of Bnei Brak, Israel, April 2, 2020. - JACK GUEZ/AFP via Getty Images

For the past month, the first thing Avi Steiner, 17, from Toms River, New Jersey, did when he woke up in the morning was to check English-language Israeli news sites on his phone. Steiner was eager to find out about any updates in Israeli policy on the entry of students with foreign citizenship to study in Israel. The tension unsettled his days for many weeks, but at the beginning of this week, it finally happened — with only a few hours’ notice, he got on a plane to Israel.

“My suitcase had been packed for two months," he said in conversation with Al-Monitor from his quarantine location at a hotel near the Dead Sea. “I’m part of a group of several dozen students. Only on Sunday did they tell us we have a flight to Israel, and when I heard I was giddy with happiness. I was sure that it was lost. For months I didn't sleep or eat regularly because of this — but now, when I see the Dead Sea from my window, I know it was all worth it.”

On Aug. 3, after a debate that lasted several weeks, professor Ronni Gamzu, Israel’s coronavirus czar, authorized the arrival of 17,000 yeshiva students, students at religious women’s colleges, secular students and youths coming to the country with various Zionist organizations. The arriving students will immediately be placed in quarantine for 14 days, where for the first time, the State of Israel will allow a new lenient measure whereby isolation will be allowed in groups of up to six people, at institutions that have been authorized by the Ministry of Health.

Knesset members from the secular Yisrael Beitenu party bitterly attacked the decision even before its official approval, as did its chairman Avigdor Liberman, who called the decision “a health hazard.” He continued, “In recent days we have heard that the government allowed about 16,000 yeshiva students from the United States, who are not Israeli citizens, to enter Israel before the High Holidays, without a preliminary coronavirus test. To any logical person it’s clear that this is an event that is not supervised and does not keep to the rules and constitutes a danger to public health and could lead us to an emergency situation.”

But the ultra-Orthodox argue that this is another incident of false incitement against them. They claim that beyond the fact that the students will enter quarantine, the majority of them are not “yeshiva students” as Liberman stated, and all of the institutions are committed to enforce quarantine according to Ministry of Health instructions. “When it is Birthright and Masa [programs of visiting Israel for Jewish adults] it’s fine and good, but when it’s suddenly the Mir Yeshiva, the ground will fall because of yeshiva students,” said Knesset member Yaakov Asher of the ultra-Orthodox Yahadut HaTorah. “No one wanted the students to arrive in a disorganized fashion. We are talking about them coming in a way that will ensure public health. A yeshiva student who comes to Israel to learn should be embraced. They come to Israel because these are their roots, so their sin is that they study Torah instead of Chinese philosophy?”

Steiner, who followed the battle in Israel around the arrival of yeshiva students, still feels hurt by the attitude expressed toward him and his friends. “I’m still hurt by the vicious media frenzy against my and my friends’ arrival to study in Israel,” he said. “We came in a group of several dozen friends from New Jersey. We are all in quarantine now for 14 days. What’s the story exactly? What transmission are we talking about? Will we purposely spread diseases?”

He added, “The State of Israel thinks it’s still in the first wave, without infection or illness, but this is a country stricken by the coronavirus, which is among the countries with the highest rates of infection. So what exactly are they protecting here? In New Jersey we experienced two very difficult months in April and May, but since then we hardly have any cases. If there is a chance that someone will get the virus, it is me from the Israelis, and not the Israelis from me.”

Steiner has come to study at a yeshiva in Israel for a year, after which he will return to the United States. “I came in order to absorb some Zionist values, to improve my Hebrew and to get a taste of Israeliness,” he noted. “This is my life’s dream. I’ve been waiting for this day since I was 10 — and 14 days of quarantine is completely acceptable.”

This is a phenomenon that has grown in recent years, and until the coronavirus pandemic, tens of thousands of young people have spent extended periods of time studying in Israel, in various programs. “This is a huge economic engine for the market,” said Abraham Luria, economic analyst for the ultra-Orthodox daily HaMevaser, who has studied the phenomenon in-depth.

“Through research we conducted in the past, we found that every young American spends anywhere from $1,500 to $4,000 a month here — if the parents are really wealthy. They rent apartments, eat at restaurants, travel the country and enjoy spending money here. There is a whole industry of businesses that cater to these students, that directly provides the livelihood for hundreds of families and indirectly for thousands more. We discovered whole industries that are based on this tourism, that bring a lot of money to the State of Israel.  Without confirmed information I assume that in closed discussions on this question, this issue also came up,” Luria told Al-Monitor.

Steiner concluded, “I don’t understand why the State of Israel doesn’t embrace us. We come to do good and commit to following the rules, including the quarantine rules. ”In regard to the economic aspect of their arrival in Israel, he said, “My parents pay the yeshiva where I study $2,200 a month including room and board, and I agreed with my parents on pocket money of $1,700 a month for expenses like laundry, clothes, travel, food, health insurance, and so on. It is clear that we give to Israel, but the response of some politicians to us is disappointing and hurtful. Despite it all, me being here is a sweet victory.”