There were at least five attempts to remove LGBT pride flags in Israel during the past year; some of them involved vandalism. 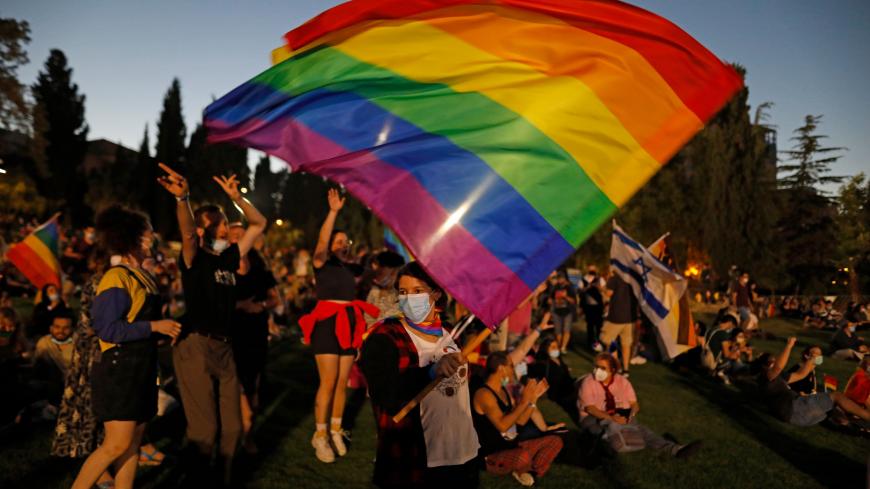 A mask-clad participant waves the LGBTQ rainbow flag as others celebrate during the annual Jerusalem Pride parade amid the COVID-19 pandemic, on June 28, 2020. Thousands took part in muted LGBT events across Israel that day as the usually larger gatherings were canceled due to coronavirus restrictions. - MENAHEM KAHANA/AFP via Getty Images

Ravit Baranes was shocked. As she walked around her garden, she suddenly noticed that the LGBT pride flag that had been hanging there had disappeared. Going through footage of a surveillance camera, the mystery was solved. During daylight hours on Aug. 8, a man climbed the wall surrounding her house with the aim of removing the multicolored flag Ravit and her husband, Shay, had installed on the top of the barrier. At first, the man failed to take the flag down. Then he came back with a knife and simply cut it off.

‘’On Saturday, a vile person who we do not know decided to take down the flag that was hanging in our courtyard. The flag was distributed by the Ramat Gan municipality in the framework of the LGBT Pride Month, and was installed in our yard by my father-in-law, who is by the way religious. He (my father-in-law) simply responded to my request, honored my wish and posted it. ... A vile and despicable man chose to take the flag down, but this will not prevent us from following the path we believe in. A path of honoring, cooperating with and listening to the other,’’ wrote Baranes on Facebook. To the press she explained that she and her husband decided to hang the pride flag as an educational act, for their children to grow up respecting all people.

The Ramat Gan municipality was quick to react. Mayor Carmel Shama Hacohen said, "I have decided, again, to respond with light against this darkness, and to fill the neighborhood with pride flags for the whole month. Even people who believe that homosexual relations are forbidden by the Torah must remember that God did not appoint them judges over others.’’ Shama HaCohen added, "The municipality has decided to fly the flag of openness — opening the city to all human beings whoever they are.’’

Tamar Yahel, CEO of the Hoshen LGBT organization, praised Shama-Hacohen’s reaction. "Shama-Hacohen announced that on any case of a pride banner being burned or removed, he will strengthen and increase the visibility of the city’s support of LGBT, by hanging more and more flags across the city. … This is an excellent example of educating the public and of leaders taking a clear stand,’’ she told Al-Monitor. Yahel said she recommends that other heads of councils act similarly.

The Aug. 8 incident was not the first. Amir Moshe, spokesperson of the Israeli Association for LGBT Aguda, told Al-Monitor, "Over the past year we witnessed a clear radicalization. There were at least five cases of attempts to take down the pride flag.’’ He cited an incident that took place in March in the city of Bay Yam. A couple who had hung a pride flag outside their window had their apartment door vandalized; someone had sprayed their door with the words "Take down the flag.’’

Another incident took place in April. Ariel and Yotam rented an apartment at the Nahlaot neighborhood in Jerusalem. One of the first things they did was to hang a pride flag on their balcony. A few days later, one of their neighbors started cursing them over the flag, calling them "disgusting homosexuals." Shortly after, the couple discovered that the water pipes leading to their apartment had been tampered with.

In June, Israel celebrated Gay Pride Month. The traditional Gay Pride marches were canceled over the coronavirus pandemic, but many cities chose to replace the march with a week of special events. Most of these events were virtual, but many cities also chose to distribute pride banners for people to fly over their windows and verandas. In the city of Rehovot, for instance, 250 residents displayed the pride flag from their balconies, in the framework of an initiative to promote tolerance in the city. The project was financed by the municipality. One morning, one of these families discovered that the cords holding the flag hade been slashed overnight, and that the banner itself was thrown outside on the street.

Tel Aviv — considered one of the most gay-friendly cities in the world — did not register such incidents this year. Honoring Gay Pride Month, the Tel Aviv-Jaffa municipality announced June 21 that it would allow cohabiting couples to register their union in a declaration at the city hall. The Histadrut labor union (the biggest union in Israel) displayed for the first time the LGBT banner on its headquarters in Tel Aviv.

As aforementioned, the Ramat Gan municipality — which borders Tel Aviv — also distributed pride flags to its residents in June. The municipality also made a point of hanging colored flags on poles across the city.

Other municipalities had different reactions. On June 23, Jerusalem authorities had an LGBT pride banner briefly removed from an external wall of the US Embassy. Far-right Deputy Mayor Arieh King had told authorities the embassy had failed to request permission to hang up the banner, though other council members claimed no such authorization was required.