KRG seeks US help to rein in Turkish attacks

While the United States has denied rumors that a US military delegation met with the outlawed Kurdistan Workers Party in the Qandil mountains, sources tell Al-Monitor that a team of US special operations forces went to inspect sites damaged in Turkish airstrikes. 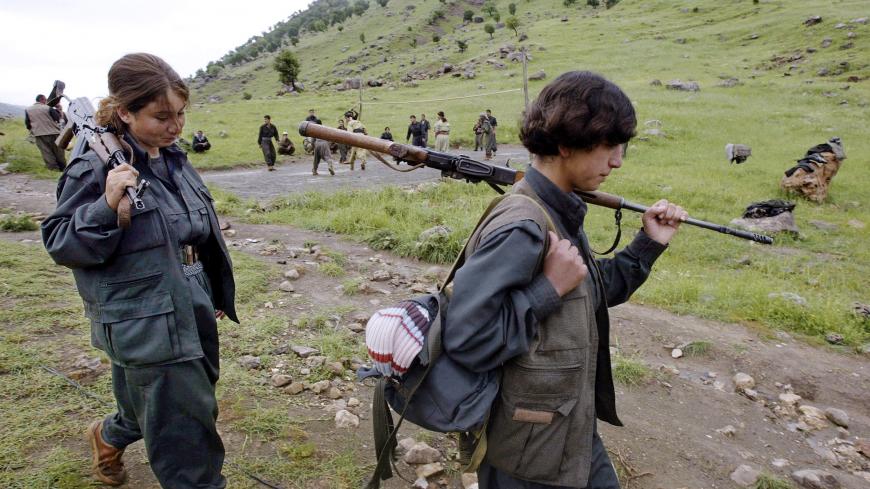 Kurdish peshmerga fighters carry their weapons as other fighters play volleyball at one of their camps in the Qandil Mountains located along the Iraq-Iran border, May 5, 2006. - ALI AL-SAADI/AFP via Getty Images

Kurdish Twitter was aflutter Aug. 2 with claims that a US military delegation had met with members of the outlawed Kurdistan Workers Party (PKK), a State Department-designated terrorist organization, at their headquarters in the Qandil mountains separating Iraq from Iran.

According to one version of the story, a convoy carrying the US forces made its way under US air cover to the mountain range. The Americans told the PKK that it would need to remove itself from northeastern Syria and stop meddling in its affairs. In return, the United States would help its Syrian Kurdish allies consolidate their autonomy project.

US officials swiftly denied any assignation with the PKK had taken place. A State Department spokesperson said no such meeting with PKK representatives occurred, telling Al-Monitor via email, “There is absolutely no truth to this claim.”

A representative for US Special Operations Command referred Al-Monitor to US Central Command, a spokesperson for which said CENTCOM was “not involved in nor is aware of any such meetings” involving the Kurdish guerillas.

A senior US official told Al-Monitor that it was very unlikely that a delegation met with PKK representatives, but did not rule out the possibility that a military team could have visited the area. Well-informed sources speaking on condition of anonymity because of the sensitive nature of the topic said that a team of US special operations forces had gone not to hold talks with the PKK but to inspect sites damaged in Turkish airstrikes in the village of Zergele in the Qandil mountains.

Eight civilians, including women and children, were killed in Zergele in a Turkish airstrike on Aug. 1, 2015.

The sources said the Americans went there at the request of the Kurdistan Regional Government, which is increasingly fed up with Turkish bombing sorties against PKK targets in their region. The attacks are killing civilians and livestock and burning vast swathes of agricultural land, sharpening anger among the Kurdistan region’s population, already seething at deepening economic hardship and allegations of corruption among the KRG elites. A senior KRG official contacted by Al-Monitor denied knowledge of the affair but asserted "no meeting" had occurred between US officials and the PKK.

The KRG wanted the US officials to survey the damage wreaked by Turkey and hear from locals about their suffering, the sources said.

Sources said the US team had also traveled earlier to Kuna Masi, a riverside tourist village in Sulaimaniyah province that was hit in a June 25 Turkish drone strike.

The Turks were targeting a Toyota pickup truck that was carrying fighters for the PKK’s Iranian arm, known as the Party for Free Life (PJAK). The missile struck a grocery store close to where the truck was parked instead. The shop owner was injured and his wife lost her leg in the attack. Their two children, a 7-year old girl and a 5-year old boy, were also hurt. A PJAK fighter was killed.

On June 15, Turkish forces launched a massive air operation against the PKK called Claw Eagle across Iraqi Kurdistan that was followed by a ground offensive called Tiger Claw.

KRG officials worry that Turkey’s purported plans disrupt the PKK’s access from Qandil to neighboring Syria could result in Turkish troops occupying parts of the Iraqi border connecting the two countries that are under the KRG’s control. This would allow Turkey to bypass the Kurdish-controlled territory and win direct access to Iraq’s Sunni Arab heartland.

That’s the other reason the KRG wants Washington to rein in Turkey. Turkey has thousands of troops deployed in Iraqi Kurdistan as well as in central government-controlled Bashiqa, near Mosul.

Iraqi Kurdish officials complain in private conversations that they are powerless to do so themselves. They blame the PKK for providing Turkey with justification for its continued attacks and say they must leave Iraqi Kurdistan.

The central government in Baghdad is equally impotent. It routinely puts out statements condemning Turkish incursions and has taken its case to the Arab League, but to no effect. It’s unlikely that any US finger-wagging will deter the Turks, as their repeated offensives against US-backed Syrian Kurdish forces have shown.

The KRG is struggling financially. The price of oil, its principle source of income, has dropped to record lows. The oil is exported through a pipeline to Turkish terminals on the southern Mediterranean. The KRG cannot afford to wreck its relationship with Ankara.

Kurdistan24, an online news site that supports KRG Prime Minister Masrour Barzani, disputed the reports that US forces had traveled to Qandil.

It claimed that the foreigners who went to Qandil were not Americans but Canadians. They were reportedly looking for four Canadian children who had been kidnapped by their father, an ethnic Kurdish Canadian medical doctor who allegedly spirited them to Qandil.

Seyit Evran, a veteran Kurdish journalist based in Sulaimaniyah, told Al-Monitor that he had spoken to several locals in Zergele. He said all had confirmed that a group of foreigners “in civilian clothes” had inspected the areas struck by Turkish jets including a house where five civilians had died. Evran was unable to confirm whether they were accompanied by KRG officials.

Turkish attacks have sharply escalated across the Iraqi Kurdish region ever since July 2015, when peace talks between Turkey and the PKK collapsed and a two-and-a-half-year cease-fire broke down along with them. The attacks are growing ever deadlier as Turkey refines its drone technology used to hunt down high-value PKK targets across Iraqi Kurdistan.