Egyptian authorities have begun measures to transfer dangerous materials stored at airports near populous areas to prevent a catastrophe similar to the devastating Beirut port explosion. 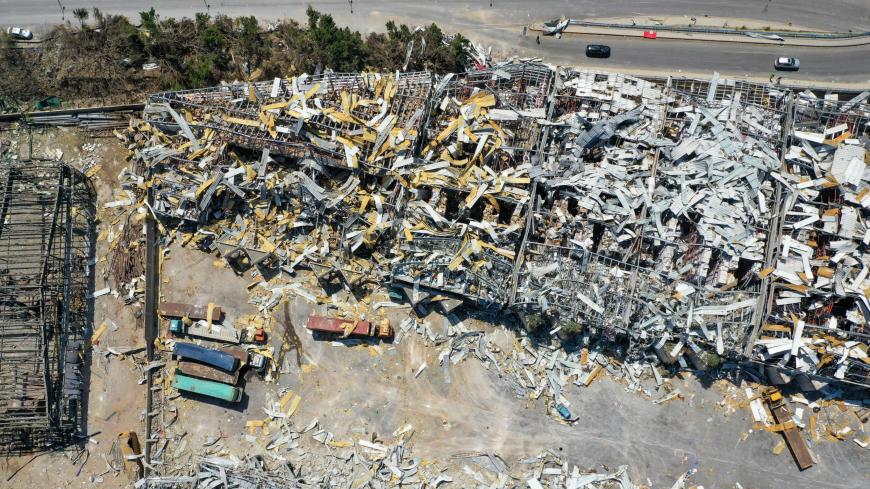 An aerial photo taken Aug. 9, 2020, shows a partial view of the port of Beirut, damaged as a result of the colossal Aug. 4 explosion of a huge amount of ammonium nitrate that had languished for years in a port warehouse. Egypt is now taking measures to inspect airport warehouses and cargo areas and remove dangerous materials from those places in an effort to avoid any sort of repeat of the Beirut disaster. - AFP via Getty Images

Egypt is taking immediate action against dangerous materials at airports as a precautionary measure for fear of a repeat of the deadly explosion that occurred in the Lebanese capital of Beirut on Aug. 4.

In an Aug. 9 statement, the Egyptian Ministry of Civil Aviation announced the formation of a supreme committee to inspect warehouses and cargo areas at Egyptian airports in an effort to move dangerous materials away from them.

On Aug. 4, an explosion occurred in the Beirut port at a warehouse storing ammonium nitrate, killing at least 172 people, injuring more than 6,000, and destroying parts of the city, with damages estimated in the billions of dollars.

The Egyptian ministry said in an official statement, “The supreme committee includes all the authorities concerned and its mission is to examine and count all shipments, stores and storage containers in the goods village and storage yards at Cairo airport and all airports nationwide.”

The committee would then take all precautionary measures against hazardous materials and release them immediately or transfer them to safe storage places outside the range of airports and population presence, the statement read.

Before the decision, there were calls from Egyptian intellectuals and TV hosts for action  to be taken against dangerous materials that exist near populous areas.

“I urge the Egyptian state to conduct a comprehensive review of all chemical stores in the country. The Beirut lesson was very painful, and it will not cost anything, but it will protect everything,” TV host Amr Adib tweeted.

An Egyptian researcher also presented a scientific solution that could spare Egypt a repetition of the Beirut disaster. In statements to local media, Ibrahim el-Sherbiny, director of the Materials Science Center in Zewail City of Science and Technology in Egypt, recommended packaging ammonium nitrate with  a polymer, pectin, to avoid the risk of explosion.

“Polymer packaging makes the chance of fire difficult, because it is a noncombustible material, and it will also be a separator between grains of ammonium nitrate, which reduces the chances of them igniting with each other, so it does not give a large explosive force, as happened in the Beirut explosion,” he said.

Parliamentarians have praised Egypt's preventive moves, saying they would protect the country’s national security as well as its citizens from Lebanon's fate.

Mohamed Abu Hamed, a parliamentarian, told Al-Monitor, “It is a good and immediate move by the Egyptian government to conduct such a review of the dangerous materials that exist in its vital institutions, especially airports and seaports.”

Bassant Fahmi, another parliamentarian, said the Beirut explosion caused Egypt to focus on the important problem involving storage of dangerous materials at key establishments. “It is a grim reminder of the troubling fact that there are dangerous dumps of dangerous materials being stored close to residential areas,” Fahmi told Al-Monitor.

She said many countries across the world are grappling with the same issue; Iraq, Libya, Ukraine, Georgia and Guinea-Bissau have also stored dangerous munitions from past and present conflicts at sites near residential areas. “All these countries should immediately take action to avoid possible disasters,” she said.

Fahmi added that the economic effects resulting from possible such explosions could devastate the national economy as well as the security of the people and the state, especially as Egypt is already struggling with the adverse economic effects of the coronavirus pandemic.

“We began calling for this right after the Beirut explosion and the government was very responsive,” she added.

Other Arab countries such as Iraq have also taken action against dangerous materials as a precautionary measure.

The Border Ports Authority in Iraq issued a directive Aug. 9 to evacuate Baghdad International Airport of any materials classified as “very dangerous.”

Iraqi Prime Minister Mustafa al-Kadhimi also directed the formation of an urgent committee to detect high-risk materials at all border crossings and take all precautionary measures to remove them from residential areas.

This came in response to warnings from Iraqi political and popular parties worried about a repetition of what happened in the Lebanese capital of Beirut due to the presence of explosive materials in ports, border crossings and airports.