Congress wants the Defense Department to regularly report on the costs required to deter Tehran's ambitions in the Middle East. 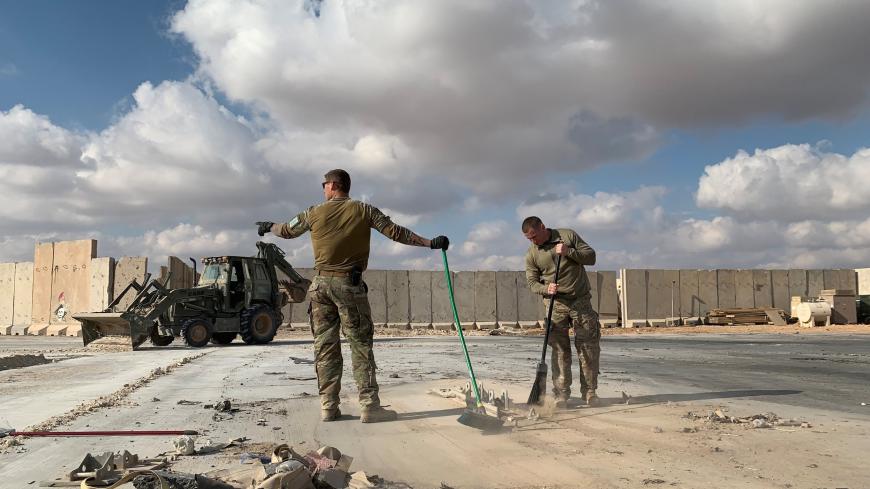 A picture taken on Jan. 13, 2020, during a press tour organized by the US-led coalition fighting the remnants of Islamic State, shows US soldiers clearing rubble at Ain al-Asad military air base in the western Iraqi province of Anbar. - AYMAN HENNA/AFP via Getty Images

As US-led wars against the Islamic State (IS) and the Taliban wind down, the head of US Central Command (CENTCOM) appears to be signaling that he prefers to leave troops in the Middle East to deter Iran — and now Congress wants to know how much it will cost.

House lawmakers have included a provision in their version of the 2021 National Defense Authorization Act that would require the Defense Department to regularly report on the military’s hidden price tag of warding off Tehran’s ambitions in the region.

Established in 2012 to help compensate for the withdrawal of US troops from Iraq, Spartan Shield is responsible for building Washington’s relationships with militaries across the Middle East and Central Asia, from Egypt to Oman to Kazakhstan.

The more than 10,000-strong partnership project has also given Washington a logistical platform for launching combat forces into the region on demand, including during the US-led war against IS in Iraq and Syria.

But House Democrats know little about it, according to a congressional aide who spoke to Al-Monitor on the condition of anonymity. “It has been going on for about eight years and is not explicitly authorized by Congress,” the staffer said.

It has also increasingly taken on a new role since Gen. Kenneth F. McKenzie took charge of CENTCOM last year.

“It is to deter Iranian aggression,” said Brig. Gen. Jeffrey Van, outgoing chief of staff for US Army Central, which leads the operation from a headquarters in Kuwait.

“They need to know that we have red lines that we don’t want crossed, but that when confronted, we can push forces into the region to regain deterrence,” Van told Al-Monitor in a telephone interview.

As the Donald Trump administration shifts focus to Russia and China, CENTCOM’s leadership is likely pushing to keep the forces and funding it has come to depend on in the region over the last decade, according to two former senior US officials.

Gen. McKenzie continues to emphasize that Iran is still vying to fill power vacuums in the Middle East and awaiting opportunities to push out US troops.

Due in large part to Spartan Shield, the United States now trains foreign militaries in 17 of the 20 countries in the region it covers. In two of the remaining three, Syria and Yemen, American combat troops have deployed under the 2001 Authorization for Use of Military Force, which has effectively allowed the military to indefinitely pursue al-Qaeda and IS.

Only Iran remains untouched, and senior officers say the operation is designed to keep it that way.

“Whether or not you’re a proponent or a critic of the administration’s Iran policy, it would certainly behoove Congress to understand how and how many taxpayer dollars are being consumed by this activity, what the objectives are and to what extent they’ve been achieved,” the congressional staffer told Al-Monitor via email.

But two senior US Army officers who have held top positions overseeing Spartan Shield say its successes are latent — and that’s the point.

“The fact that there’s still stability in our area of operations, that’s success,” Brig. Gen. Van told Al-Monitor. “Iran is continuing to contest US presence in the Gulf but also is aware of the military cost of confrontation."

The Trump administration has been bearing down on Iran in part as a response to Tehran’s deployment of Islamic Revolutionary Guard Corps (IRGC) military advisers — and, allegedly, weapons technology — to conflicts in Iraq, Syria and Yemen in recent years.

By its own admission, the US government’s economic pressure campaign on Iran has led it to lash out, most notably with a series of sabotage attacks against oil infrastructure in the Gulf region last year.

The incidents culminated in a deadly tit-for-tat with the US military in Iraq before Trump had Quds Force commander Maj. Gen. Qasem Soleimani, architect of the IRGC’s regional designs, assassinated in a January drone strike in Baghdad.

Spartan Shield played a central role in the Trump administration’s effort to face down those tensions, according to Gen. Michael Garrett, who commanded US Army Central until last year.

Less than 36 hours after protesters accompanied by IRGC-linked militia figures stormed the US Embassy in Iraq’s capital, “The first brigade of the 82nd Airborne was in Kuwait and then in Baghdad. They were able to do that based on the organizations that are already sitting there in-theater,” Gen. Garrett told Al-Monitor in a phone interview.

“Having military-to-military relationships is very, very important,” he said. “You have to have some of that in place.”

Questions about the future scope of Spartan Shield, and by extension the role of the United States in the Middle East, are compounded by House appropriators’ scrutiny of a controversial budget that has long funded the US military’s operations in the region.

Spartan Shield is largely underpinned by an undisclosed chunk of the Overseas Contingency Operations (OCO) budget, which is not subject to spending caps and has been criticized as a “slush fund” that allows the military to expand regional endeavors at the cost of strategic priorities.

A House Committee on Appropriations report recently called the OCO an “abject failure” that has given the Pentagon “a budgetary relief valve that has allowed it to avoid making difficult decisions.”

Brig. Gen. Van said the OCO is essential to meeting Spartan Shield’s current goals in the Middle East. Without it, he said, “We cannot counter Iranian malign influence. We definitely couldn’t compete against Russia and China in the region.”

The program also pulls from the Pentagon’s base budget, and there may be other ways to help fund it, according to Anthony Cordesman, senior Gulf analyst at the Center for International and Strategic Studies.

Brig. Gen. Van and Gen. Garrett declined to discuss numbers, but Spartan Shield’s reliance on reserve forces led the Army to request $1.36 billion in OCO funds to call up personnel for next year, nearly double what it requested in the same category for the military’s efforts in Afghanistan, Iraq and Syria.

“It would be a little cheaper if you did have assigned forces to the region,” said Brig. Gen. Van.

“US [Army Central] are good stewards of the taxpayers’ money,” he said. “We’re trying to keep our headcount and our operations down to a minimum footprint that maintains stability in the region.”

As Defense Secretary Mark Esper looks to free up resources to counter China and Russia, CENTCOM may have a hard time justifying Spartan Shield’s current expenses.

And as Cordesman sees it, doubling down on military partnerships to shore up Middle Eastern governments may not be the best way for Washington to outmaneuver Russia and China.

“We don’t have any stable partners in the Middle East. And a lot of that isn’t about their relationship with us,” he told Al-Monitor.

Administration officials and top military commanders still appear to be hashing out exactly what, and where, the military’s role should be in countering Beijing and Moscow — the Trump White House’s stated strategic priority.

“They have to be sensitive to how they approach this. Look at the Chinese presence in the Gulf area — in the Red Sea and the Indian Ocean — it affects three different commands; not just CENTCOM, but also AFRICOM and INDO-PACOM,” Cordesman said.

Defense Secretary Esper’s internal review of the regional combatant commands is set to conclude by Oct. 1, but a clear articulation of Washington’s future role in the Middle East may take several months, if not years.

First, American officials and their counterparts in Baghdad must agree on the future of the presence of US troops in Iraq. Next year’s budget will also ultimately shape the military’s options on the ground.

“There’s always going to be some type of malign actors in southwest Asia,” said Brig. Gen. Van. “If we’re not there, then Russia and China will be.”