Can Erdogan push for his 'crazy project' amid economic crisis?

The Turkish government's decision to rezone some agricultural lands in the vicinity of the area where the Canal Istanbul is to be built has rekindled controversy surrounding the project. 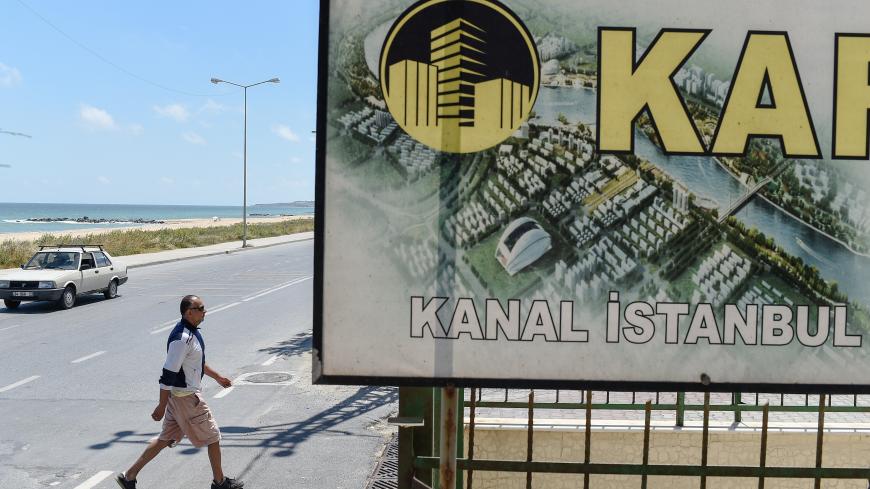 A real estate billboard offers apartments with a canal view in the small coastal village of Karaburun, near Istanbul, on June 12, 2018. The ambitious and highly controversial Canal Istanbul project, first announced by Turkish leader Recep Tayyip Erdogan in 2011, would begin in the Istanbul district of Kucukcekmece and then head toward Sazlidere reservoir before emerging into the Black Sea. - YASIN AKGUL/AFP via Getty Images)

Even though no tender date has been set for the construction of Turkey’s controversial Canal Istanbul, a project touted as "crazy" by Turkish President Recep Tayyip Erdogan in 2011, the land buying spree in Istanbul’s northern regions has already turned into a race.

Ignoring grave urban and environmental concerns mainly voiced by Istanbul Mayor Ekrem Imamoglu, a member of the main opposition, the Turkish government keeps the hype alive as a tool of political propaganda. The project’s finances and its business model remain a mystery, but work on rezoning and land speculation in the vicinity of the artificial waterway remain in full swing.

Experts say the planned canal would have little use as a waterway in terms of reducing tanker traffic in the Bosporus Strait. Still, the project has proved useful for boosting prices in the area as the Environment and Urban Affairs Ministry continues zoning work. Land purchases in the area came under growing media scrutiny last year following reports that Emir Moza bint Nasser — mother of the Qatari emir — and some Turkish ministers, including Erdogan’s son-in-law, Finance Minister Berat Albayrak, are among the buyers. High-profile purchases also led to a further jump in land prices.

Although Erdogan has been keeping the fuss around the project alive for the past nine years, the project still lacks any type of concrete construction and business plans aside from a draft schedule announced by government officials.

In January, then Transportation and Infrastructure Minister Cahit Turhan said the construction work for the project would begin in 2020 and be concluded by 2026. He also said the tender, bidding and contracting processes of the project will be completed in less than a year. Accordingly, the construction works, including excavation and hardscaping, are planned to be completed in six years, by February 2026. The canal would be 43 kilometers (26.7 miles) long, 100 meters (328 feet) wide and 25 meters (82 feet) deep.

The business model of the project remains unknown. The public-private partnership business model — the one implemented in the government’s other megaprojects, including the third Bosporus bridge and the new Istanbul airport — seems highly inapplicable for the Canal Istanbul as it offers little profit and attraction for the private sector. The public investment model, in turn, does not seem viable given the Turkish economy’s rapidly increasing budget deficits and public debt.

Yet these predicaments dampening the prospects of the project haven’t stood in the way of the government’s groundwork preparations to build a new city in northern Istanbul. The Environment and Urban Affairs Ministry officially added the project into Istanbul's urban development plan in late 2019, changing the initial draft by the Istanbul municipality. The ministry then approved structural and land-use plans for the project and made them public on July 2 for a procedural one-month objection period. The ministry’s decision to change the designation of acres of farmlands to commercial parcels has stirred up fresh furor over the project.

Even though there are no concrete steps taken to build the canal, the government’s decisiveness to build a new city in the area has turned the public’s attention to zoning plans, land purchases and skyrocketing prices. Land title records for the area where the waterway would run, stretching from Durusu on the Black Sea coast to Kucukcekmece Lake on the Sea of Marmara, have witnessed an unprecedented level of buying and selling. According to a news report, some agricultural lands changed hands more than 10 times in eight years. Citing official data, Sozcu reported that land transactions in villages located in these areas have rapidly intensified, with demand quintupling the prices. Reportedly, there are several large companies among the buyers along with local and international high-profile figures.

The project area consists of 8,300 parcels of land; 71% of them are private properties and 7% are owned by private companies partnering with public entities. In 2014, the 350-million-square-meter (some 86,500 acres) area was declared a reserve construction area under a Cabinet decision. Half of it consists of residential areas, protected areas and the new Istanbul Airport, while the other half was not zoned. The controversial zoning work is now underway in this area.

The zoning plans made headlines in the Turkish media this month when 44 acres of land reportedly purchased by the mother of the Qatari emir last year was rezoned for commerce in the final plans. Accordingly, some 22,000 square meters (5.4 acres) of the land, which was formerly designated as agricultural, now could house business centers, malls, hotels, restaurants, banks and financial institutions.

Another large chunk of the land that was also rezoned as commercial and residential is owned by Albayrak. In a bid to downplay the purchase, Albayrak’s lawyer Ahmet Ozel described the investment as an “ordinary transaction,” in January, saying the Albayrak family already owns parcels of land in the area that were purchased in 2003, long before the introduction of the canal project. Yet the ministry’s decision to rezone the area has raised eyebrows in opposition circles.

Regardless of the uncertain prospect awaiting the Canal Istanbul project, ongoing groundworks indicate that the government decidedly wants to carve out an alternative city in the area. Many worry that such a new settlement could turn Istanbul — Turkey’s largest city with more than 15 million — into an even more amorphous and dismal metropol.

Furthermore, Turkey’s pandemic-hit economy lacks the public resources and private appetite to shoulder infrastructure costs of the prospective city. Istanbul municipality and civic groups opposed to the project are fighting it by filing lawsuits one after the other.