Is this the end of Turkish secularism?

Radical Islamist ideas are not only winning out in Turkey, but getting cheerful approval from the last remnants of the secular establishment. 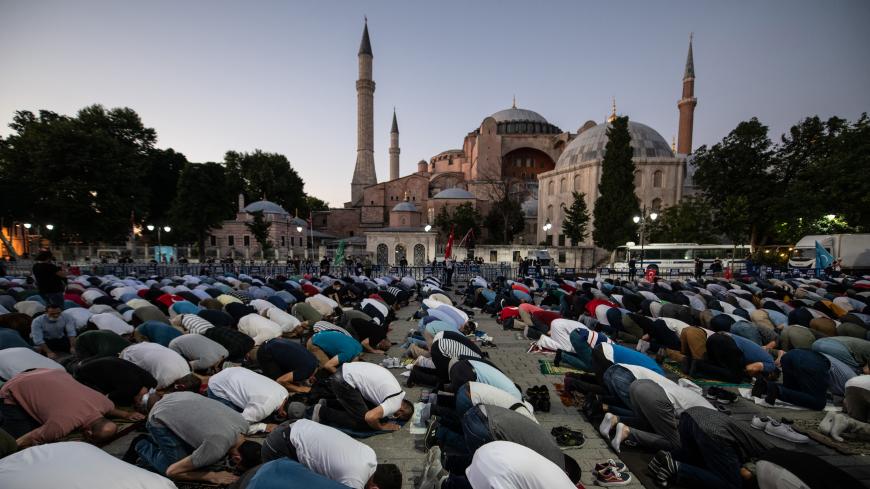 The Hagia Sophia opened for Muslim prayer on July 24. As the world grapples with Turkish President Recep Tayyip Erdogan’s abrupt decision, many opposition figures have fallen in line to congratulate the decision.

One can understand the enthusiasm of the Islamist Felicity Party or Erdogan’s coalition partner Nationalist Movement Party, whose bases share strong feelings about the museum turning into a mosque. However, other parties’ reactions are more surprising.

Recent polls indicate only 20% of Good Party voters and 21.8% of left-leaning Republican People’s Party (CHP) voters approve of the decision, along with 33% of the voter base of the pro-Kurdish People’s Democratic Party’s (HDP). The HDP’s elected officials are the only ones who dared speak words of caution as the ruling Justice and Development Party (AKP) promotes a monolithic expression of identity.

Muharrem Ince, a 2018 CHP presidential candidate, announced he would join the first Friday prayers if he is invited.

Timur Kuran, a professor of economics and political science at Duke University, told Al-Monitor, “We are observing rising preference falsification in Turkey on a host of matters. The reactions to Hagia Sophia offer a salient example. The opposition has applauded the decision not because it approves it. Rather, it is afraid to be labeled as anti-Muslim and to be tied to Kemalism’s assertive secularism.”

A few intellectuals have voiced criticism of the decision, to harsh treatment by pro-government media outlets.

One of the most striking comments came from author Orhan Pamuk, a Nobel laureate. Pamuk said, “There are millions of secular Turks like me who are crying against this but their voices are not heard.”

Political Islam has produced several red lines that no political figure dares to cross. The fear of offending Muslim sensitivities has crippled the opposition while giving free rein for Erdogan, who gleefully grabs more power. This timidity has led to serious policy consequences in the last two decades.

For example, the Turkish government has invested unreported sums of money into alternative medicine against the advice of the medical establishment. Traditional cures are touted as having been used and recommended by the Prophet Muhammad.

Another example is women’s rights, the first and worst victim of political Islam. After seeking the right to wear their headscarves in the public domain, women are being gradually pushed back into the house. Femicide has skyrocketed, while women’s presence in education, workspaces and parliament has declined.

A recent International Social Survey Program poll documented a spike in the number of those who support Sharia law. The figures, which stood at 14-19% 2009, increased to 27-32% in 2019.

Diyanet, Turkey’s official religious body, has an exponentially growing budget and number of personnel have become beacons of political Islam. Religious sects have gained sufficient power within the state, many argue, to form a “parallel state” that led to a coup attempt in 2016. While the Fethullah Gulen movement was only one of them, the others’ mounting reach is an open secret in Turkey.

Law professor emeritus Levent Koker told Al-Monitor, “Over time the AKP became entrenched as the political instrument of the Turkish nationalist establishment, now politically using religion more efficiently and visibly, turning the Diyanet into an overt instrument of political hegemony. This does not mean that the AKP, as an Islamist party, is changing the foundational characteristics of the Turkish Republic to turn it into an Islamic polity. To the contrary, what seems to be happening now is the rise of authoritarian rule with a strong reference to religion in a historical-political context in which Islam has been institutionalized as a mechanism of state control over society. It is an open-ended question whether this authoritarian formation could be reversed or will advance to turn Turkey into a Sharia-based state. The historical background says the latter option is very remote, while the former is possible but very difficult under the current national and international climate dominated by nationalist/populist authoritarians.”

Birol Baskan, a non-resident scholar at the Middle East Institute, told Al-Monitor, “For now, political Islam has fallen short of legislating on matters of everyday life, but has been quite successful reaching in its main goal. … For years now, discussions with titles such as ‘Islam and democracy,’ ‘Islamic economy,’ ‘Islam and ecology,’ ‘Islam and women’ and others have been based on the assumption that Islam is relevant and involved in all areas.”

Baskan observed that the opposition was a tacit or open accomplice in this process. He pointed out that many mayors and CHP officials have avoided using the term “corruption” and instead speak of “economic waste” — a concept with stronger resonance in the conservative circles. “All these are evidence of the success of political Islam, not its demise,” he added.

Aykan Erdemir, senior director of the Turkey Program at the Foundation for Defense of Democracies and a former member of the Turkish Parliament, told Al-Monitor, “A majority of Turkey’s pro-secular figures have unknowingly internalized the Sunni hegemonic worldview and cannot imagine a future without the Turkish state’s direct control over the religious domain through the Directorate of Religious Affairs.”

On Al-Quds Day, the speeches by the left-leaning CHP leadership and right-wing politicians were almost identical. One of the crucial consequences of this skewed understanding of secularism, Erdemir said, is that it has made the opposition “apathetic to the persecution of and discrimination against Turkey’s religious minorities." He went on, "We now witness that even a tame and timid version of secularism is no longer welcome in Turkey as an emboldened Erdogan pushes a more assertive sectarian agenda.”

With limited political accountability and a struggling economy, Turkish politics is becoming increasingly volatile. Secularism is on life support and those who do not fit into the ideal Sunni Muslim mold are quietly paying the price.