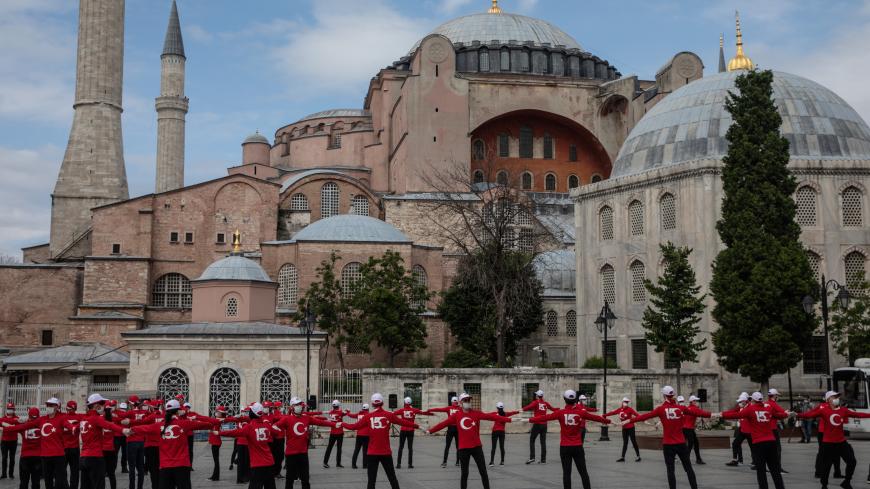 People perform in front of the Hagia Sophia Mosque on the fourth anniversary of the July 15, 2016 failed coup attempt on July 15, 2020 in Istanbul, Turkey (photo by Chris McGrath/Getty Images) -

Turkish President Recep Tayyip Erdogan forged ahead this week with his plan to recast the historic Hagia Sofia as a mosque, despite international outcry. Erdogan’s power play has been done with one eye on his constituency at home and the other on his ambitions for regional influence.

Background: The Hagia Sofia was built as a Christian church by Roman Emperor Justinian I in 537 and was the world’s largest cathedral for almost a thousand years. The Muslim-Turkish Ottomans under Mehmed II conquered the East Roman (Byzantine) Empire in 1453, changing the name of its capital, Constantinople, to Istanbul. Mehmed II converted the cathedral to a mosque. Then, in 1935, the founder of the Republic of Turkey, Mustafa Kemal Ataturk, turned it into a museum to mark Turkey’s secular turn.

Power Play: “Some Turkish secularists are duped by Erdogan’s emphasis on Turkey’s national sovereignty. Playing on the anti-West impulses of Turkish secularists helped him to soften the strong opposition to his move,” writes Cengiz Candar. “His message and actions make up his forceful claim for the global leadership of Muslims at a time when Turkey’s aggressive foreign policy has proliferated its military presence from the mountains of Iraqi Kurdistan to Syria and with some degree of success to Libya, where he confronts such traditional power centers of the Sunni Muslim world as Egypt, Saudi Arabia and the United Arab Emirates.”

Listen: Listen to my podcast interview with Cengiz Candar here, where he discusses Erdogan, the Hagia Sofia, the Syria War and his new book, “Turkey’s Mission Impossible: War and Peace with the Kurds” (see below).

1. Gaza: Khamenei says Iran will ‘spare no effort’ to back Hamas

‘Spare no effort.’ Iran Supreme Leader Ayatollah Ali Khamenei sent a message to the head of the Hamas political bureau, Ismail Haniyeh, on July 6 that “Iran will spare no effort to support the Palestinian people to restore their right and hold off the evil schemes of the Zionist entity.”

Meanwhile, Speaker of Iran’s parliament Mohammad Bagher Ghalibaf spoke by phone this month with both Haniyeh and Islamic Jihad Secretary-General Ziad al-Nakhalah on how to deepen cooperation.

Background: Iran has over the years provided both Hamas and Islamic Jihad with clandestine weapons including missiles, training and finances. Iran and Hamas fell out in 2012 when Hamas cut ties with Iran’s ally, Syrian President Bashar Al-Assad. Hamas since then has faced dwindling regional support, massive governance challenges in Gaza and relentless pressure by Israel, leading to reconciliation with both Tehran and Damascus. Haniyeh spoke at the funeral in Tehran of Islamic Revolutionary Guards Corps Maj. Gen. Qasem Soleimani, killed by a US drone strike on Jan. 3.

Our take: Iran is signaling its willingness to increase its support for the cause of Hamas and Islamic Jihad; Israel, Egypt and the United States will take note. Iran values the perception that its reach extends to Gaza, complementing the presence of its ally Hezbollah in Lebanon on Israel’s northern border. But Iran’s reach and influence is heavily constrained. As Rasha Abou Jalal writes, a major obstacle to Iranian support is also “the Palestinian Authority and Israel’s policy to dry up Hamas sources of funding, taking strict measures to prevent money from outside the Palestinian territories from reaching the Islamic movement through local banks.” Egypt, a regional rival of Iran’s that has diplomatic ties to Israel, also wants to keep Hamas and Islamic Jihad on a short leash and shut down Iran’s channels of support. In any case, Iran is experiencing its own deep economic crisis, so whatever support makes its way to its coffers may be more trickle than windfall.

Read more: Rasha has the scoop here from Gaza on the latest moves by Hamas and Islamic Jihad; check out our reporting here back in January on Haniyeh’s visit to Iran.

Annexation — that is, extending sovereignty over some 30% of Jewish settlements in the West Bank — seemed close to a done deal as recently as last month, depending exclusively on the green light from US President Donald Trump’s administration.

Chances now ‘low to nonexistent’: Not so anymore. Netanyahu has run into a buzz saw on his so-called legacy issue. “Right now, I put the chances of Israeli annexation of any part of the West Bank at low to nonexistent,” a top Israeli security official told Al-Monitor’s Ben Caspit on condition of anonymity.

Our take:  Caspit concludes that “the good news for Netanyahu is that the entire non-event, which generated resonating headlines for many months and engaged the public agenda, has been pushed to the outer reaches of the margins given the far more pressing problems he faces, chief among them the health and economic consequences of the coronavirus pandemic.” That said, Bibi knows that his best chance at a likely partial or even symbolic annexation comes with Trump in office. Trump might still back Netanyahu if Bibi decides to go ahead. Israel’s UN Ambassador Danny Danon told us two weeks ago that any annexation step would happen within eight weeks or so, with an eye on the US electoral calendar.

3. Gulf: Why the Middle East post-economic economy recovery will lag behind Asia

The International Monetary Fund’s latest report this week is yet another downer for Gulf and regional economies. The updated economic outlook for Gulf oil exporters in 2020, which was already negative, now projects their economies to contract at least a 7.3%, as measured by real gross domestic product, Positive growth is expected at 3% in 2021, assuming that COVID-19 and its consequences are fading. This means a loss for the region of about $270 billion in oil export revenue this year.

Karen Young writes this week that the post-COVID recovery in the Middle East will be hindered by many obstacles, including the impact of low oil prices, the  likely slow return of travel and tourism, declines in investment in major real estate projects and a smaller foreign labor pool.

“While populism poses a significant threat to economic recovery across developed economies, for the economies of the Middle East, the underlying structural weaknesses are more damning. Youth unemployment, lack of fiscal space to create needed stimulus for business — or to even provide electricity in Lebanon — and expand social services, along with poor access to capital all converge under the pressure of a recession caused by the coronavirus crisis.”

What we’re reading...and why:

Al-Monitor columnist Cengiz Candar has been a participant-observer in dealing with Turkey’s Kurdish question, not just as a columnist and analyst, but as an adviser to former Turkish President Turgat Ozal and participant in the most sensitive Track II meetings involving Turks and Kurds. He tells the story, with a lot of new details, in his latest book. And you can hear him talk about the book in the latest On the Middle East Al-Monitor podcast here.

by Murielle KASPRZAK and Joseph SCHMID | AFP | May 26, 2022
END_OF_DOCUMENT_TOKEN_TO_BE_REPLACED