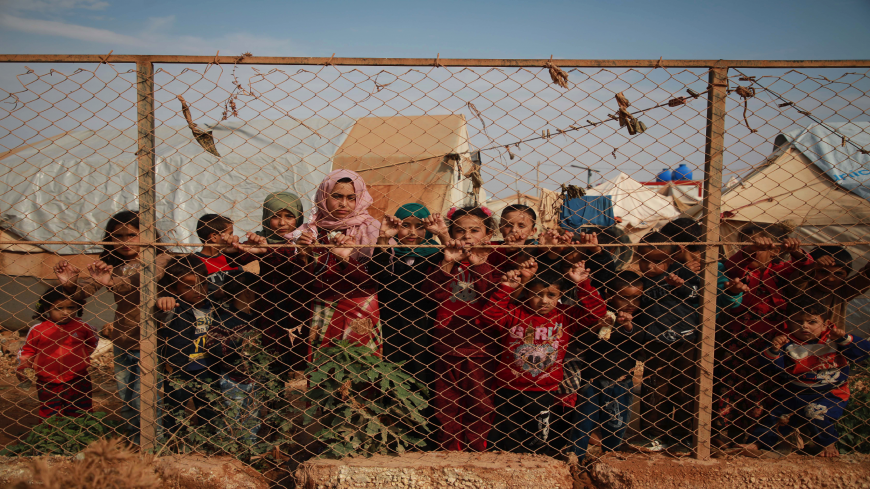 Displaced Syrian children stand behind a fence outside their tents in a camp set up near the village of Kafr Lusin, in Idlib's northern countryside near the Syria-Turkey border, on Oct, 22, 2019. - AAREF WATAD/AFP via Getty Images

Should Russia get its way at the UN Security Council this week, millions of Syrians could lose access to crucial humanitarian aid while in the midst of an economic crisis that’s sent the cost of food and medicine soaring across the country.

Before the 15-member council is a cross-border aid mechanism that, if renewed before it expires Friday, would allow supplies to continue flowing from Turkey to Syria’s impoverished northwest.

A draft resolution put forward by penholders Germany and Belgium last month called for Turkish border crossings Bab al-Hawa and Bab al-Salam to be renewed for one year and the Yarubiyah crossing in Iraq to be reopened for six months. However, sources familiar with the negotiations say the latest version being circulated has dropped the demand for Yarubiyah’s reopening altogether in an attempt to appease Russia.

Russia hasn’t budged. And to make matters worse, sources say the Russian delegation is pushing for the removal of the Bab al-Salam crossing at the Turkish border. The United States is said to still be pushing hard for the restoration of Yarubiyah and is urging the Europeans not to cave to Russian pressure.

The debate playing out at the Security Council centers on an agreement that since 2014 has allowed UN agencies and their partners to deliver much-needed aid without having to go through President Bashar al-Assad’s government for permission.

“The cross border aid mechanism is the most secure, efficient, financially viable and timely way to deliver aid to these populations,” she said, adding, “Our research indicates it is simply unrealistic to expect aid from within the country, which requires authorization from the government to replace cross-border aid.”

But the original deal, which put in place four official border crossings from Turkey, Jordan and Iraq, broke down in January. Faced with a Russian and Chinese veto threat, the Security Council voted to halve the number of delivery routes from four to two and reduce their yearlong mandate to six months.

The vote shuttered the Yarubiyah crossing in Iraq, through which 40% of northeast’s medical provisions were supplied. Since the crossing’s closure in January, the UN estimates supplies are reaching just 31% of the medical facilities previously served.

Nongovernmental organizations say they’ve been unable to fill the aid gap, and they warn that the coronavirus has the potential to decimate the region’s health infrastructure, already under strain after Turkey’s military campaign against US-allied Kurdish forces last October.

The limited number of government-approved deliveries to have reached the northeast since January were slow to arrive and far from enough, said Emma Beals, a researcher focused on Syria and co-founder of the Syria in Context newsletter.

“The regime is now able to use approval of deliveries into northeast Syria as a tool in their political negotiations with Kurdish groups and can simply block approvals at any time as they have in the past across the country for a decade,” Beals said.

Russia has long argued that aid should be channeled through Damascus, but Syria watchers point out the government has repeatedly restricted what assistance can be routed through the capital so that only those areas perceived as loyal receive it.

“On a daily basis, the regime is trying to limit, control and abuse UN programs in Damascus,” said Charles Thepaut, a visiting fellow at the Washington Institute for Near East Policy.

“On the one hand, you have a systematic attempt to dismantle the cross-border mechanism by Russia, and on the other hand, you have a Russian tendency to turn a blind eye to anything being done by Damascus against the humanitarian principles,” he said.

One just has to look at Rukban, the desert settlement hosting thousands of malnourished civilians along the Jordan-Syria border, for an example of how aid has been politicized. In recent years, the government has permitted just a handful of convoys to reach the camp, the last of which was in February 2019.

Humanitarian needs across Syria have risen considerably in recent months. A financial crisis in neighboring Lebanon and Assad’s own mismanagement and corruption have left the economy in tatters. A series of tough US sanctions aimed at discouraging foreign investment, and which take effect this summer, have added to the economic uncertainty.

The Syrian currency has meanwhile plummeted to record lows, crashing to roughly 3,000-to-1 US dollar last month. Steep inflation has meant foodstuffs are increasingly out of reach for the population, an estimated 83% of which lives beneath the poverty line.

The widespread hunger is especially dire in Idlib, where three-quarters of the population are women and children. Hundreds of thousands fled their homes this year for crowded, informal displacement camps along the Turkish border. Many more are homeless.

“The need is greater than ever now,” said Dr. Mufaddal Hamadeh, president of the Washington-based Syrian American Medical Society. The worsening economic situation “makes it ever more important to have free access to deliver aid,” he added.

His organization, which brings medications and medical supplies to what remains of Idlib’s health care facilities, is one of many that depend on the two Turkey-Syria border crossings for access.

“If we weren't able to provide aid through these borders, where would the aid be coming from?” he said, adding, “It’s definitely not going to come from Damascus.”