Coronavirus likely to delay Pentagon war games in Mideast to 2021 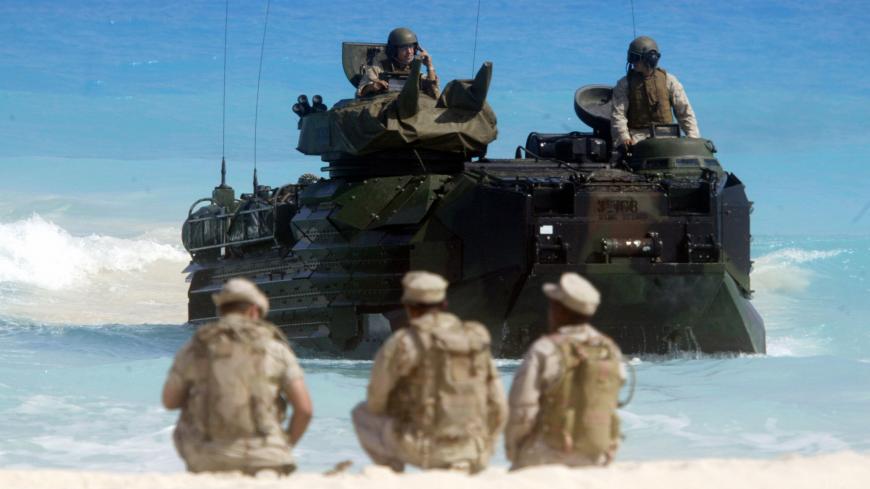 US naval troops perform an operation during the Bright Star joint war games that involved 30,000 troops from 12 countries on the coast of Egypt's northern El-Alamein region, Sept. 15, 2005. Bright Star was scheduled for this year, but is likely to be postponed until 2021. - KHALED DESOUKI/AFP via Getty Images

The Pentagon plans to postpone one of its largest war games exercises in the Middle East due to the coronavirus pandemic, Al-Monitor has learned.

Operation Bright Star, an exercise that brings together troops from several nations to train alongside and learn about Egypt’s military, will likely be postponed until 2021, a US official told Al-Monitor. It was originally set to be held this September.

The Defense Department is looking at several courses of action to reschedule the exercise, though a new date has not yet been set, the official said.

The US is also considering pushing back next year’s edition of Operation Eager Lion in Jordan, the largest war games in the Middle East, to avoid it coinciding with the rescheduled Bright Star exercise, according to the official. Eager Lion is held every other year and included forces from 30 countries in 2019.

The head of the US Central Command, Gen. Kenneth "Frank" McKenzie, met with top Jordanian and Egyptian defense officials in his tour of the Middle East over the past week. A statement by Egypt’s military said McKenzie discussed joint training exercises with Defense Minister Mohamed Zaki.

A spokesperson for CENTCOM declined to comment on future operations.

The move to postpone Bright Star follows a series of similar cancellations earlier this year due to the global COVID-19 pandemic.

The United States and its allies suspended training exercises previously set to be held in South Korea, the Mediterranean Sea, Israel, northwest Africa and the Arctic as the coronavirus outbreak turned into a global crisis. The United States also canceled nearly all of this year’s Defender-Europe, in which 20,000 American troops were supposed to deploy to Europe for a simulated defense of NATO.

Bright Star and Eager Lion are key to US military partnerships in the Middle East, a pillar of Washington’s foreign policy in the region. The delay comes amid heightened concern in the Trump administration about the Kremlin’s military ties with Egypt, which has sought to buy Russia’s Su-35 warplanes despite the threat of US sanctions.

It is not clear what effect, if any, training delays may have on relations.

The United States and Egypt have conducted Bright Star roughly every other year since 1980, following the signing of the 1978 Camp David Accords and President Jimmy Carter’s establishment of the predecessor to CENTCOM.

The Obama administration twice suspended the training exercise following Egypt’s 2011 revolution and the massacre of protesters at Cairo’s Rabia square by Egyptian security forces in the wake of the country’s 2013 coup.

The Trump administration resumed Bright Star in 2017 despite pushback from some members of Congress over the Egyptian government’s human rights record under President Abdel Fattah al-Sisi. Trump later invited the Egyptian president to the White House as Egypt’s parliament moved to amend the country’s constitution to extend Sisi’s eligibility to rule until 2030.