Palestinian shot and killed by Israeli military after alleged attack

Israeli and Palestinian officials disagree on the circumstances behind the death of a 29-year-old Palestinian in a West Bank village Thursday. 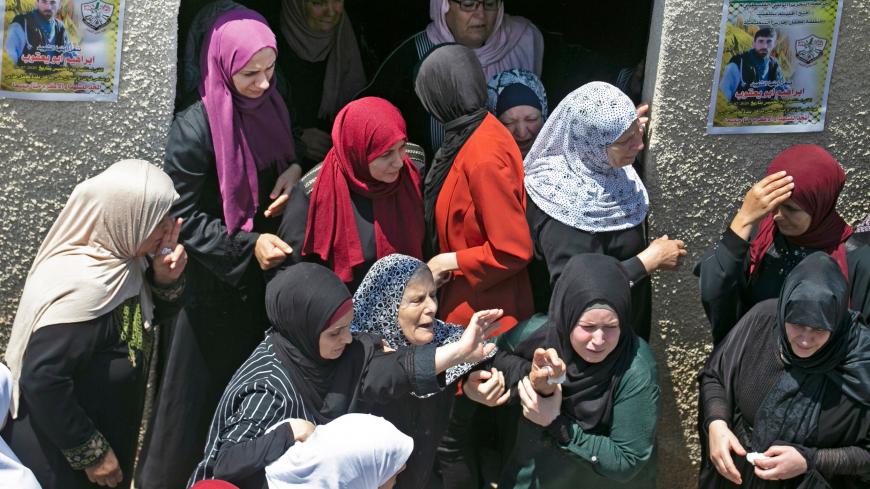 Relatives of 29-year-old Palestinian Ibrahim Abu Yakoub, who was killed by Israeli forces July 9, mourn during his funeral in the village of Kifl Haris, south of the West Bank city of Nablus, on July 10, 2020. - Photo by JAAFAR ASHTIYEH/AFP via Getty Images

A Palestinian man was shot and killed by Israeli security forces Thursday after allegedly throwing a Molotov cocktail at them.

On Thursday, the Palestinian Authority’s Health Ministry said in a statement that a man was shot in the neck and died near the West Bank village of Kifl Haris in Salfit governorate. He died from “bullets of the occupation,” the ministry said.

The Israeli military said it shot one Palestinian who, along with another person, was throwing Molotov cocktails at an Israeli military post in the West Bank, The Times of Israel reported. But Salfit Gov. Abdallah Kmail said the two were walking when Israeli troops opened fire “for no reason."

The dead man, identified as Ibrahim Abu Yakoub, was buried in the village today.

The death follows a series of protests in Israel against the treatment of Palestinians by security forces. In late May, Israeli border police shot and killed an autistic Palestinian man named Iyad Halak in Jerusalem. While police said they believed Halak had a weapon, he was unarmed. This sparked a massive outcry among Palestinians and also Israelis, prompting Jerusalem’s chief rabbi to visit the grieving Halak family and offer condolences.

Halak’s killing led to a series of “Palestinian Lives Matter” protests against Israeli police treatment of Palestinians in June. The demonstrations were inspired by the Black Lives Matter movement in the United States.