Energy Minister Yuval Steinitz announced June 23 the opening of bidding for drilling in Block 72, off Israel’s northern shores, which Lebanon says is adjacent to its own fields. 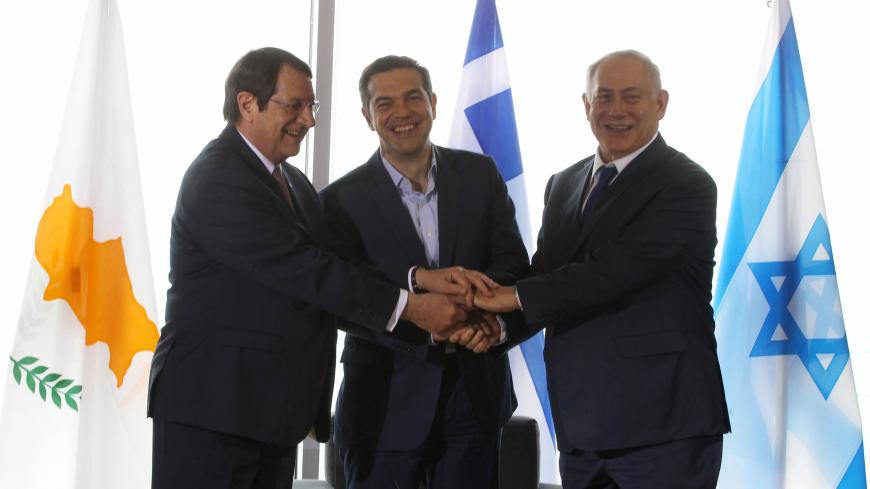 Israel’s government approved June 23 a decision to search for oil and natural gas in a maritime area known as "Block 72" (formally known as "Alon D"), a disputed sea area located near the north of the country, and not far from Lebanon. The decision enabled the launching of an offshore bidding round that should last several months. The closing date for bids is set for Sept. 23, and the successful bidder will be announced at the end of October.

Israel and Lebanon have been engaged in a dispute over their maritime borders for several years now. Thus, the June 23 decision generated a harsh Lebanese reaction. President Michel Aoun warned July 2 that the decision to start oil and gas explorations in Block 72 is “extremely dangerous," insisting that Lebanon will not allow others to encroach upon its internationally recognized waters. He also called upon Lebanon’s Supreme Court to convene over the issue.

The two countries have known two wars and decades of bloody conflicts. With Hezbollah engaged in an arms race to produce precision missiles, fears are growing for another escalation in the region. On May 6, Israel’s envoy to the United Nations Danny Danon asked the UN Security Council to extend and enlarge the mission of UNIFIL forces in Lebanon. Security experts warn that the maritime dispute could escalate these existing tensions.

The bilateral maritime dispute goes back several years. In 2009, an Israel-US consortium discovered the Tamar offshore natural gas field. In 2010, natural gas was also discovered in an adjacent offshore field named Leviathan. Both fields are located near Israel’s northern shore. These discoveries encouraged more oil and gas searches. Lebanon delineated 10 maritime zones — or blocks — where oil and gas could potentially be discovered. The problem was — and still is — that both countries have never agreed on their maritime border.

Lebanon has never recognized the State of Israel, thus the maritime border between them was never demarcated. In 2011, a year after the Leviathan discovery, Lebanon submitted to the UN its proposed maritime border. Its proposal was based on the 1973 UN Convention on the Law of the Sea, which entitles states to a 200-nautical mile Economic Exclusion Zone. Israel has not ratified this convention, but generally respects it. Shortly after the Lebanese proposal, Israel offered the UN its own maritime proposal. Evidently, the two proposed border lines clashed, with a certain area disputed. Negotiations to delimit the maritime boundaries were set to begin in 2019, but eventually nothing really came out of it.

Shortly after the Israeli gas discoveries, Lebanon claimed that a portion of the Leviathan gas field was located in its own waters. But this claim was later abandoned. Still, out of the 10 blocks delineated by Lebanon for potential gas research, Block 8 and Block 9 are partially located in the disputed sea area. Lebanon is now arguing that Block 72 is adjacent to what it considers its own Block 9.

Things are even more complicated considering the disappointing results so far of Lebanon’s sea drilling. In April, French Total said it had failed to encounter hydrocarbons in the Block 4 exploration well. In May, Lebanon's Energy and Water Minister Raymond Ghajar announced that his country will start oil and gas exploration in Block 9 by the end of the year, with Total doing the drilling. Lebanon is hoping to strike better luck this time around.

Yuval Steinitz, who served in the former government as energy minister, kept the same position in the current Netanyahu government. A nomination that reflects the importance of the goal set by the previous government of achieving energy independence. A goal that has great consequences both economically and security-wise. According to estimates, the Tamar and Leviathan fields could hold together 26 trillion cubic feet of natural gas. Once developed, these two fields could satisfy Israel’s electricity needs for the next 30 years. It could even turn it into a net energy exporter. Israel’s energy ties have also important consequences for its relations with neighboring Egypt and Jordan.

In 2012, then-Defense Minister Ehud Barak and Israel Defense Forces Chief of Staff Benny Gantz approved the purchase of four new warships, tasked, among other things, with the protection of the new gas fields. In parallel, Israel has worked over the past decade to expand its cooperation with Greece and Cyprus, especially on the project of the EastMed undersea pipeline, which should transport liquified gas from the eastern Mediterranean to Europe. As Israel’s current defense minister and alternate prime minister, Gantz is now committed to that same task, of defending Israel’s energy interests, both diplomatically and militarily.