The second wave of the novel coronavirus is affecting the IDF, which has ordered 10,000 soldiers into quarantine. 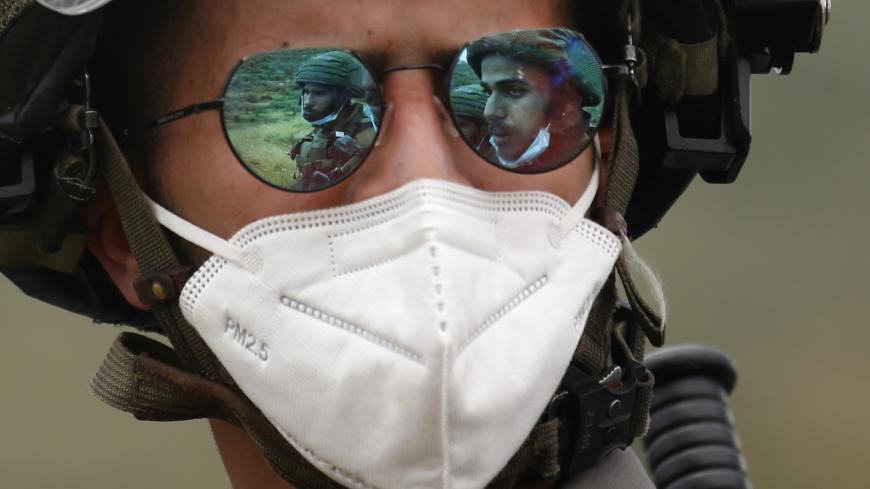 The images of two Israeli soldiers are projected on the sunglasses of a third wearing a mask against the novel coronavirus during a protest by Palestinians against Israeli settlements on May 15, 2020 in al-Sawiya village, south of Nablus, in the occupied West Bank.

Israel registered a record number of 1,231 new coronavirus cases on a single day, with 350 of them reported in the IDF July 9. The number that was twice that reported on the highest day during the first wave of the pandemic in March and April, prompting the army to place 10,000 soldiers under quarantine. As of July 9, the IDF has seen 562 of its soldiers and citizen staff members contract the coronavirus. The majority of the carriers are in stable condition and 246 have already recovered.

The army said that most of the quarantined soldiers continue to carry out their duties under strict medical supervision and in secure locations, but the numbers are still so alarming that the IDF chiefs decided to call up 2,000 reserve soldiers by the end of July. So far, only 750 reserve soldiers have been called up to assist the army in its battle against the novel coronavirus. In the special emergency meeting where the recruitment decision was made, Defense Minister Benny Gantz presented a plan to open more dedicated quarantine hotels next week.

Gantz himself has been in quarantine since July 8. He tested negative in a first exam, but was instructed to isolate himself until the results of a second one are back. “Gantz feels good and will continue to manage the ministry’s matters and the rest of his public work from isolation,” his office announced. This morning, it was the turn of IDF Chief of Staff Aviv Kochavi. The military chief, who is now in isolation, is reportedly feeling well and not exhibiting any symptoms.

Despite the increase in COVID-19 cases, the IDF has not reinstated lockdowns on military bases, as it did during the first wave of the virus. Instead, soldiers were instructed to be extra careful to maintain social distancing. For combat units, leave is now limited to once every three weeks.

The IDF also announced July 8 it was canceling a major exercise planned for September, saying it did not have sufficient funding for the large drill, meant to test the army’s ability to move rapidly from routine to wartime operations in the event of a massive multi-front scenario. Political sources accused the army chiefs of having ulterior motives, arguing the announcement was designed to pressure the Finance Ministry amid a row between the two bodies over the army’s annual budget.