The survey by the International Rescue Committee is the latest proof of economic hardship in Iraq as it grapples with a steep jump in COVID-19 cases. 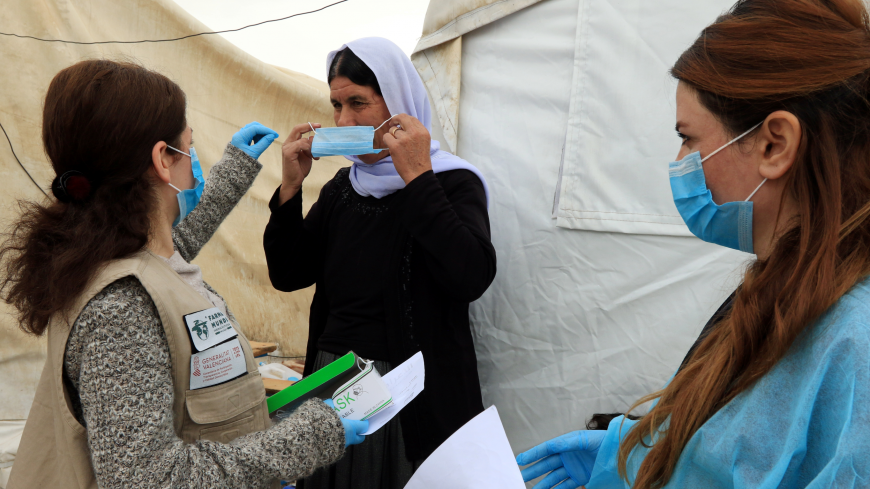 A medical staff member helps a displaced Yazidi woman put on a protective face mask following the coronavirus outbreak, at the Sharya camp in Duhok, Iraq, March 7, 2020. A new study finds that COVID-19 is hurting the economic prospects of many displaced Iraqis. - REUTERS/Ari Jalal

The majority of displaced Iraqis have experienced job losses, food shortages and more during the COVID-19 pandemic, according to a recent survey by humanitarian organizations working in the country.

The International Rescue Committee conducted a survey with other organizations in May of people in camps, informal settlements and places formerly displaced individuals have returned to. The interviews took place across the north and west, including the Kurdistan Region, in Ninevah, Duhok, Erbil, Sulaimaniyah, Kirkuk, Salahuddin, Anbar and Diyala provinces, an International Rescue Committee spokesperson told Al-Monitor.

According to the survey, 87% of those interviewed lost their jobs as a result of the lockdowns. Also, 73% reduced the amount of food they consumed due to their economic situation. And 61% said they were going into debt.

Iraq has instituted a series of business closures, curfews, travel bans and restrictions on civilian movement since March. Despite these measures, coronavirus cases are climbing at around 2,000 per day, a large jump since mid-June, according to Health Ministry statistics. The number recorded today was 2,184, for a total of 53,708 with 2,160 deaths.

The UN-affiliated International Organization for Migration did a report on April data that showed large percentages of small and midsize Iraqi businesses reported revenue and job losses during the pandemic.

Iraq’s economic situation was not good before the pandemic either. Protests against the government have continued on and off since October. One of the grievances of the protesters, who are largely young, is the lack of job opportunities in the country.

There are around 1.4 million internally displaced Iraqis throughout the country, according to the UN. Many were displaced as a result of the conflict with the Islamic State that began in 2014 and have yet to go home. Security concerns, territorial disputes, poor economic conditions and other factors are contributing to continued displacement.