To mitigate the impacts of the unrelenting US “maximum pressure” policy, Iran seems to be seeking solutions in clinching long-term partnership deals with allies. 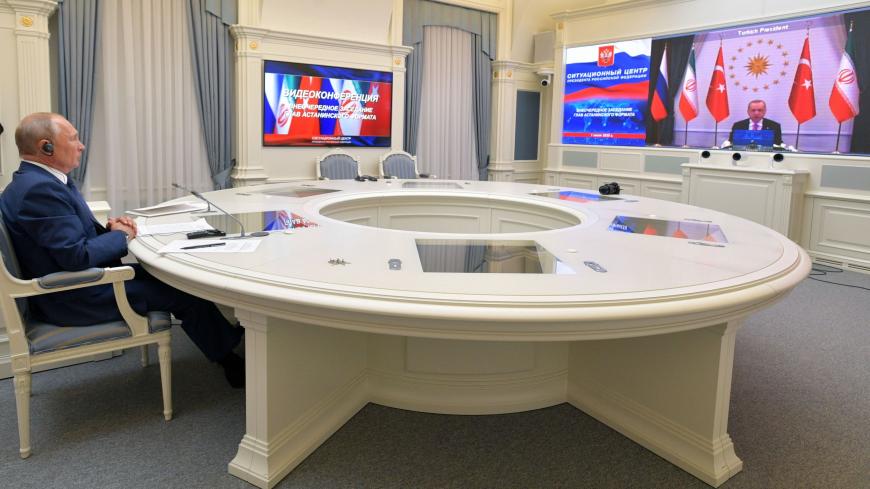 Russian President Vladimir Putin attends via videoconference a trilateral meeting with the leaders of Iran and Turkey on the topic of Syria, in Moscow, July 1, 2020. - ALEXEY DRUZHININ/SPUTNIK/AFP via Getty Images

Iran’s Foreign Minister Mohammad Javad Zarif wrapped up a visit to Moscow, where he delivered a “special message” to Russian President Vladimir Putin. Upon return to Tehran, Zarif told reporters that the message from President Hassan Rouhani revolved around “some bilateral issues” as well as the Iran nuclear deal.

Zarif did not release further details on his one-hour conversation with Putin that was held over the phone due to the Russian president’s special “coronavirus-related protocols.” In recent weeks, the Islamic Republic has been in close dialogue with its key nuclear deal partners Russia and China, urging them to resist US pressure on extending an Iran arms embargo that will expire under the nuclear accord and UN Resolution 2231 in October. It was not immediately clear if Rouhani’s “important message” had to do with the embargo issue, but the expiry is expected to turn Iran into a lucrative weapons market for the Russian Federation.

The top Iranian diplomat also said he had discussed with his Russian counterpart Sergey Lavrov plans for a 20-year partnership agreement. A similar but shorter-term deal is already in place between Tehran and Moscow but will expire in March. Zarif noted that the two sides have agreed on signing a more comprehensive treaty.

The announcement comes as the US government is pressing ahead with its “maximum pressure” policy, which aims to bring the Iranian economy to its knees. To dodge the impacts, Tehran has gone out of its way in boosting business with neighbors as well as US rivals China and Russia.

Talks on a new agreement with Moscow also coincided with harsh criticism in Iran against the draft of a 25-year partnership pact the Rouhani government is planning to clinch with Beijing. Iran’s Foreign Ministry has linked the opponents to an “enemy campaign” that aims to “sabotage” the agreement. But those critics argue against the government’s “secrecy” in handling the treaty, which they allege will force upon Iran “humiliating” concessions.

A large community of the critics is also highlighting speculation that under the deal Iran will cede to China control of several of its southern touristic and energy-rich islands, an assertion flatly denied by government officials. Last week, Mahmoud Ahmadi Bighash, a senior Iranian lawmaker and a member of the parliament’s National Security and Foreign Policy Commission, said in a taped interview that the island control issue had been stated in the draft, but the “Iranian Parliament and people will not allow this to happen.” The bombshell revelation drew a backlash from government officials and prompted the parliamentarian to withdraw his statement, claiming that his words had been taken out of context.

The government’s explanations do not appear to have allayed the concerns, however, as political circles continue to debate different dimensions of the contentious agreement on a daily basis.

In the latest news, senior Iranian economist Hossein Raghfar reminded the Rouhani government of how China has already exploited anti-Iran economic sanctions and how countries in similar deals with Beijing “have turned into Chinese colonies,” ending up in accumulated debt. “The truth of the matter is that China treats Iran as a customer rather than a strategic partner,” Raghfar concluded in an interview with Reformist daily newspaper Arman-e-Melli.