An Iranian broadcaster says an Iran-to-Beirut commercial passenger flight had US jets make an aggressively close pass to it over Syria near the Iraqi border. 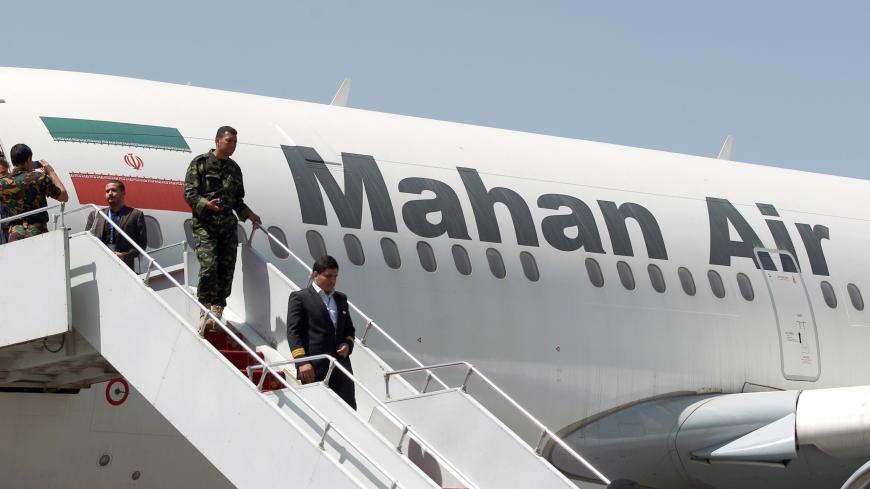 A Mahan Air plane sits on the tarmac after landing at Sanaa International Airport in the Yemeni capital on March 1, 2015. - MOHAMMED HUWAIS/AFP via Getty Images

The Islamic Republic of Iran Broadcasting originally said Mahan Air flight 1152 was harassed by Israeli aircraft as the flight was en route to Beirut, Lebanon.

The broadcaster later quoted the Mahan Air pilot as saying the two fighter aircraft identified themselves as American, and that one of them passed within 100 meters of the passenger plane.

SANA, Syria’s state-controlled news agency, said the flight was intercepted in the vicinity of the al-Tanf base, a remote US military outpost on Syria’s eastern border with Iraq.

Footage said to have been taken by passengers aboard the flight appeared to show a fighter jet outside the aircraft window that resembled an F-15.

A spokesperson for US Central Command later told Al-Monitor via email that an American F-15 “conducted a standard visual inspection” of the Iranian airliner while on a “routine air mission” near the al-Tanf US special operations base in eastern Syria.

“The visual inspection occurred to ensure the safety of coalition personnel at [al-]Tanf garrison,” Capt. Bill Urban told Al-Monitor via email, adding that the US aircraft kept a “safe distance” of roughly 1,000 meters from the passenger plane.

CENTCOM did not immediately reply to Al-Monitor’s request for clarification as to why a passenger aircraft would be perceived as a threat to the US special operations base.

Mahan Air regularly flies routes from Tehran to Beirut via eastern Syria’s airspace, near the US-controlled 55-kilometer military deconfliction zone around the al-Tanf base.

A spokesperson for the US-led coalition against the Islamic State did not immediately return a request for comment.

The passengers arrived in Beirut, some with minor injuries, an airport official told Reuters.

The United States sanctioned Mahan Airlines last year, accusing the company of working with the Quds Force of Iran’s Islamic Revolutionary Guard Corps (IRGC) to arm fighters in Syria and Yemen. The US first sanctioned Mahan in 2011, alleging its aircraft had ferried IRGC personnel, weapons, and funds.

Midair encounters are common in the crowded airspace over Syria’s civil war. The US military has frequently accused Russian pilots of intercepting American aircraft.

A Syrian Cham Wings passenger aircraft had a near-miss with a US Global Hawk surveillance drone near Tanf in 2018, according to documents seen by Al-Monitor.

The US sanctioned Cham Wings in 2016 for allegedly transporting fighters to assist government forces of President Bashar al-Assad in the country’s civil war.

The Pentagon has also allowed Israeli fighter aircraft to use US air corridors along the Jordanian border and over the al-Tanf base in order to confuse the Syrian government’s radar systems, a US official told Al-Monitor last month.

Israel has hit hundreds of Iran-linked targets with precision airstrikes in Syria in recent years. Washington’s top Syria envoy said last year that the United States was supporting those efforts.

The Pentagon says the remote al-Tanf outpost is there to facilitate the multinational fight against IS, but the extremists have largely been cleared from the area and the base has been used to collect signals intelligence on Iran-linked organizations in Syria, Al-Monitor previously reported.

Update: July 24, 2020. This article was updated with a statement from CENTCOM.