The exotic Baron Palace, inspired by Hindu architecture, in Cairo’s Heliopolis district was inaugurated after years of renovation works, with the aim to become a new tourist destination. 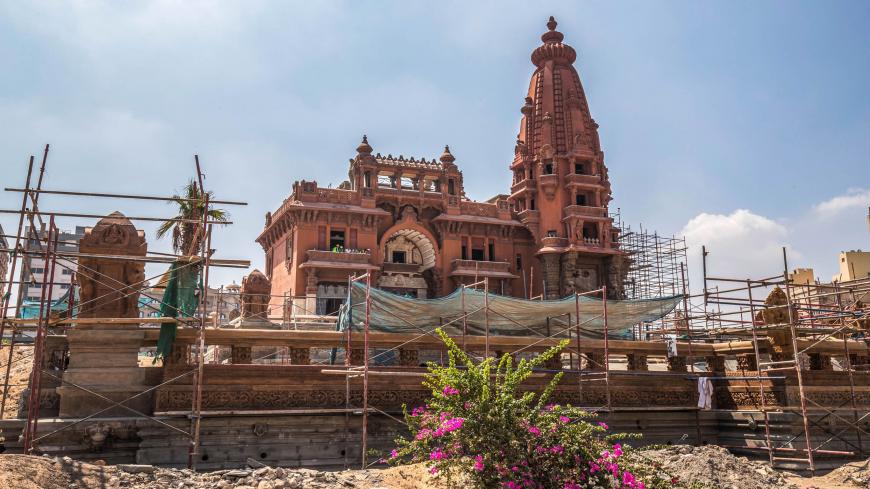 Following decades of neglect, and after almost three years of restoration, Cairo’s exotic Baron Palace opened its doors to the public June 30, with the aim of becoming a new tourist destination in the city and a permanent exhibition on the history of Heliopolis, the elegant suburb-turned-district erected around the palace in the early 20th century.

Located on top of a small hill dominating what back then was the recently established Heliopolis, the alluring palace consists of a main building and a stunning tower and was built between 1907 and 1911 by the Belgian industrialist Edouard Empain. Its characteristic design, inspired by Hindu temples, was conceived by French architect Alexandre Marcel, who imported decorative elements modeled on Hindu and Buddhist icons previously exhibited at the Paris Exposition in 1900, to adorn the exterior of the burnt sienna building.

The construction, which is surrounded by two large gardens and has three stylish terraces leading toward its entrance, was also one of the first in Egypt to be built with a reinforced concrete structure; it had an electric lift, a novelty at the time. Its singular character made it the source of inspiration of a number of popular myths and legends over the years.

The story of the palace is intimately tied to that of Heliopolis. Empain arrived in Egypt at the beginning of the 20th century, shortly after one of its companies had built the first tramway in Cairo. Once in the country, Empain formed the Cairo Electric Railways and Heliopolis Oases Company together with Boghos Nubar, son of the first prime minister of Egypt, Nubar Pasha. The consortium then purchased a plot of 2,500 hectares of desert in the northeast of Cairo in 1905 to build a new town — Heliopolis — and linked it to downtown Cairo, which back then had become as expensive as other capitals in Europe.

“Baron Palace became the symbol of Heliopolis because it was the house of its main founder — Baron Edouard Empain — and because its tower and architecture are very unique,” Choukri Asmar, chairman of the Heliopolis Heritage Foundation, told Al-Monitor.

The building started to fall into decay following the decision of the Empain family to sell the palace in the 1950s after three generations had lived there. It was not until 2005, on the centenary of Heliopolis, that the Ministry of Housing acquired the building and handed it to the Ministry of Culture, at the time responsible for antiquities. The gardens were then renovated and used to organize a number of social events. But the palace remained neglected until mid-2017, when its comprehensive restoration started.

“[The renovation] is a kind of requalification of the building and its uses,” said Moamen Othman, the person responsible for the museums department at the Ministry of Tourism and Antiquities. He told Al-Monitor during the inauguration of the site, “[The idea is] to tell the story of the palace itself and also to tell the story of Heliopolis. This is a very important place and it was the main building of the area, so why not explain to the local community their story and the story of the buildings that existed [here].”

The assistant to the minister of tourism and antiquities for investment and developing financial resources, Eman Zidan, previously told Al-Monitor that the ministry would announce soon a public-private partnership for the operation of the palace, following a similar contract signed June 2 on the management of the Cairo Citadel.

“The collective memory of the people still living do not recollect that this place was ever used,” Asmar said. “This was the symbol of Heliopolis, yes — but it was left [abandoned].”

For Asmar, there is still a long way to go in the conservation of the district's heritage. Article 50 of the Egyptian Constitution — which the group helped push forward — states the state’s commitment to protect and maintain its heritage, including architecture, but this first step has not yet been followed by more specific laws or executive acts, he noted.

“We have still not reached a continuous work on heritage building protection. We are firefighting instead of agreeing on a certain strategy of renovation and legislation,” Asmar added. “The authorities use [the legislation in place] to protect some buildings, but there is a lot of regretful deterioration that happened and that the laws could not prevent.”

Yet over the last decade, Asmar argued that a significant change took place in regard to the concern that the inhabitants of Heliopolis show toward the heritage of the district. “One of the purposes of our initiative was to make every Heliopolitan a watchdog to see what is wrong,” he said.

Now, the main historical buildings of the district are starting to attract the attention of the local authorities. The main example of this renewed interest is the Palace of Sultana Melek, which lies next to Baron Palace. Also designed by Marcel, the palace was built for Sultan Hussein Kamel, son of Khedive Ismail, and remained the residence of his wife — who gives the name to the building — until her death. The site was declared a registered monument in 2000, and is currently being renovated, Othman said.

A third iconic building of Heliopolis, the Hippodrome, was also about to be demolished but is now being restored, Asmar said, pointing out that building owners in the district are starting to pay more attention and accept the regulations of heritage. Other well-known buildings in the area, such as the Heliopolis Palace Hotel and the Heliopolis Basilica, are featured also in the exhibition at Baron Palace.

“[The inauguration of Baron Palace] is a message that we send to the people,” Othman said. “We must conserve our heritage.”

He concluced, “There are still very important buildings [in Heliopolis], so people can see them and understand how important their conservation is. Not only of Baron Palace, but of all the buildings in this area, which is a historical district with historical buildings and a very important heritage."