China's digital and satellite advances offer new regional opportunities and challenges for the United States in countering Beijing's economic influence in the region. 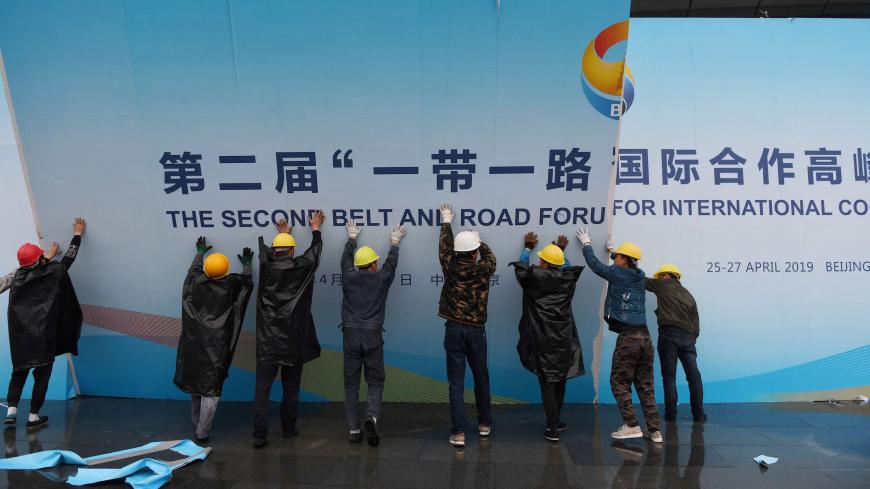 Workers take down a Belt and Road Forum panel outside the venue in Beijing on April 27, 2019. - GREG BAKER/AFP via Getty Images

With the launch of the final satellite of the BeiDou Satellite Navigation System (BDS) into orbit in late June, China has finally completed its quest to become a space power. Introduced in 2015, the BeiDou satellite navigation network is part of the Digital Silk Road (DSR), a digital corridor of China's Belt and Road Initiative (BRI).

Completed six months ahead of schedule, the system is an alternative to the American Global Positioning System (GPS), Russia’s GLONASS and Europe’s Galileo.

In the Middle East region, eight satellites from the BeiDou system were already providing navigational services to Arab states, according to a report presented at the Second China-Arab States BDS Cooperation Forum held in Tunis last year.

BeiDou satellite coverage has been offered to countries participating in the BRI megaproject, and Arab countries were among the first to have access to the facility as they are also members of the China-Arab Cooperation Forum and the Strategic Dialogue between China and the Gulf Cooperation Council. Basically, according to Beijing, “Any type of bilateral cooperation [with China] can be considered part of the Belt and Road.”

Saudi Arabia was one of the first to join formally, and Riyadh and Beijing had signed a MoU for the implementation of the DSR and to establish technical exchange platforms in three cities each in both countries. The DSR also falls in line with some of the UAE’s future projects.

As UAE economist Nasser Saidi observed in his talk at the Harvard Kennedy School in 2018, the digital corridor project or a space station would complement the UAE's national space program and help lift economic sectors to the next level. Collaboration in such innovative technological fields has also been described in detail in the “1+2+3” cooperation pattern laid out in the Arab Policy Paper of 2016.

In the meantime, several GCC states such as the UAE, Saudi Arabia and Egypt also became part of a Digital Silk Road Initiative launched last year. Including artificial intelligence, smart cities, nanotechnology and other related fields, this program has the potential to dramatically change the digital landscape of these countries. Fiber optic cable networks and data hubs are some other main components of the DSR infrastructure.

However, the DSR has some grey areas and its risks are not limited to the GCC states.

To start with, surveillance may become the main issue as Beijing could monitor internet traffic or even sever links with other regions if it wants. A total of 36,964 miles of undersea fiber optic cables have been laid by Chinese companies in more than 95 projects and 98% of global telecommunications are relayed through these cables.

Situated in international waters, the cables remain vulnerable and breach of security cannot be monitored in underdeveloped countries. In addition, BeiDou navigation is used by many large-scale commercial applications and its features are built into popular smartphone brands. Most countries would wish to upgrade the security of their internet data.

Any data and information accumulated from users can help provide insight on gaining substantial market shares, at the very least. Nevertheless, during the ongoing pandemic, artificial intelligence and diagnostic technology can be better deployed in the Middle East with the DSR.

Notably, according to research carried out by China’s Ministry of Industry and Information Technology, China can become “one of the world’s most important international submarine-cable communication centers within a decade or two.”

Second, the widespread use of Chinese digital technology can give Beijing more influence and leverage. Having only had an economic presence in the Middle East, China has never been involved in any security aspect, but with this holistic network of fiber optic cables on the ground, internet links under the sea and BeiDou satellites in space, Beijing has introduced a new power concept.

With this multi-dimensional digital network, China has more options and it is also binding BRI partner countries within its exclusive zone of influence. At the very least, there would be more diplomatic opportunities and China would have more prestige and influence in international organizations.

Recently, conveying the reach and concept of BeiDou, a Chinese state TV program explained, “A navigation system is like a gold key of your home that should be kept only in your own hands, not others.”

A third risk is dependence. Relying on China for their internet and satellite navigation, many countries would manage their operations through the DSR, and it could include both civil and military uses. Right now, most of the countries covered by BeiDou systems are involved in the BRI, but various related services like port traffic monitoring and disaster mitigation have been provided to nearly 120 countries globally.

Per a report by the US-China Economic and Security Review Commission in 2019, any services under the "Space Silk Road" could deepen reliance on China for space-based services at the expense of US influence.

Finally, since most BeiDou features are intrusive in nature, the Digital Corridor has potential to complicate matters further between Washington and Beijing. There are concerns that the space technology-based project may have implications for US interests in security, economic and diplomatic areas.

According to a Council on Foreign Relations report in 2018, it's possible that Chinese tech companies may insert “backdoor mechanisms that could increase [Beijing’s] intelligence and propaganda operations in Belt and Road Initiative partner countries.” Users of the system could also be tracked once the technology is in widespread use.

There are certainly some military uses of the satellite system and Beijing-based military analyst Zhou Chenming has said, “With our own navigation and location system that has good precision, China’s missiles, drones and other vehicles can rely on our own technology without having to worry about signal losses, and this can help [our military] to better coordinate force deployment and logistical support.”

To create a balance and neutralize the situation, spending would have to be increased in the digital sector and GPS accuracy could be improved further. Restrictions on technology purchases might help to reduce the heavy reliance on supply chains from China. In fact, the American semiconductor industry has given a $37 billion proposal to keep the United States ahead of China in the production of semiconductor chips, which are intrinsic to defense technology, artificial intelligence and 5G networks.

According to the report "China’s Ambitions in Space-Contesting the Final Frontier," to counter China’s military operations in the space domain, the US Space Command would maintain suitable deterrence with training, exercises and new policies along with active participation in international space governance institutions to ensure their global leadership.