The latest reason Australia won’t take back citizens detained in Syria’s prisons for IS? Coronavirus

Australian Foreign Minister Marise Payne says COVID-19 has further complicated the possibilities of repatriating Australians captured during the war against the Islamic State in Syria. 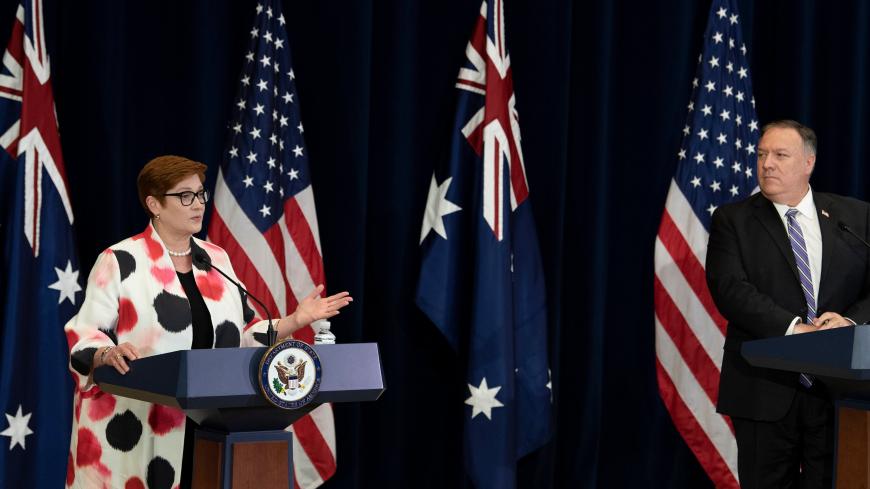 US Secretary of State Mike Pompeo listens while Australian Foreign Minister Marise Payne speaks during a press conference at the US Department of State following the 30th Australia-United States Ministerial Consultations, July 28, 2020, in Washington. - Photo by BRENDAN SMIALOWSKI/POOL/AFP via Getty Images

Australia’s foreign minister said Tuesday that the global coronavirus pandemic is part of the reason her government will still not repatriate dozens of Islamic State suspects with Australian citizenship who are detained in Syria.

“We will not put Australian lives at risk to try … to extract people,” Foreign Minister Marise Payne said during a press conference alongside US Defense Secretary Mark Esper, Secretary of State Mike Pompeo and Australian Defense Minister Linda Reynolds at the US State Department in Washington.

“It’s important to note that Australia has repatriated some orphans from Syria, but these are very complex challenges,” Payne said.

“COVID-19 has further complicated this picture extensively. … Movement in Syria and in the region is now more complex than ever,” she said.

Australia is among a number of Western countries that have so far refused to repatriate their citizens captured during the US-led war against the Islamic State (IS) in Iraq and Syria.

Australian officials have repeatedly cited the safety of the country’s citizens and diplomats as reasons not to take back more than 60 detainees held in camps and prisons run by Kurdish-led forces in Syria.

Lawyers representing some of the Australian women detained at the al-Hol internment camp have argued that their government has a constitutional duty to repatriate them, something US officials have publicly urged the international community to do.

Australia is not alone. Some 2,000 foreign IS fighters are detained in Syria, with some 800 of them believed to hold some form of European citizenship.

France, Britain and Germany are among the countries who have refused to take citizens back. Germany and France have allowed some of their detained citizens to be transferred to Iraq, where some of the French detainees have been sentenced to death.

Britain and other countries such as Denmark have stripped the citizenship of select IS-affiliated citizens. A number of Western countries have brought home some children from the camps, mainly orphans.

"We’re a good international citizen, we don’t shy away from our responsibilities,” Payne said Tuesday. “Those also of course include our responsibilities to citizens at home, to our diplomats and officials who would be required to travel into what are very dangerous situations.”

Syria’s Kurdish-led forces and the US Defense Department have both said the IS prisoners’ indefinite detention is not sustainable. Calls by northeast Syria’s autonomous administration for an international tribunal to try foreign IS detainees have gone largely unanswered.