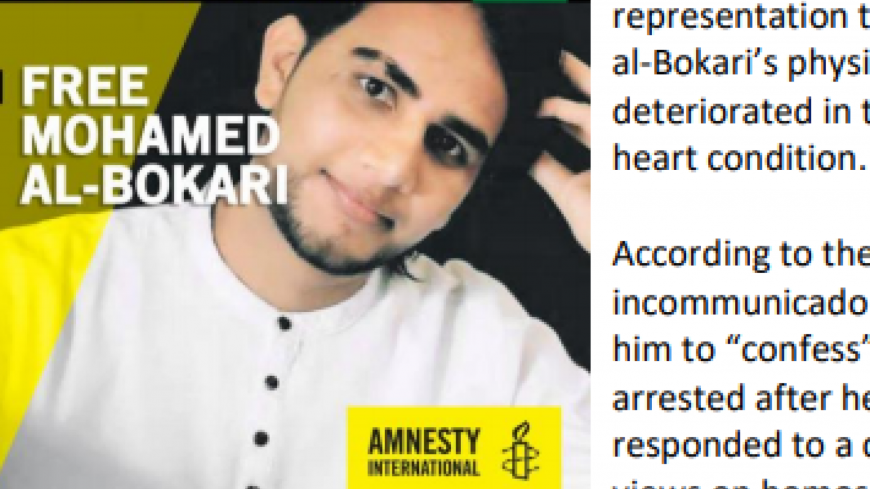 Mohamad al-Bokari, 29, was arrested in April after he uploaded a video that included him talking about same-sex relationships, the New York-based rights group said. In the video, which Saudi authorities claimed violated “public order and morals,” Bokari said, “Everyone has rights and should be able to practice them freely, including gay people.”

He was charged with “violating public morality” and “imitating women.” Last week, a Saudi court sentenced the activist to deportation after 10 months in prison and a fine of 10,000 Saudi riyals ($2,700). Bokari has 30 days to appeal.

A source in contact with Bokari said he has no access to a lawyer at the al-Malaz prison in the capital, Riyadh. According to Human Rights Watch’s source, Bokari, who suffers from a heart condition, has been subjected to physical and psychological duress while in pretrial detention.

During his arrest, police reportedly kicked and slapped him in an effort to force him to “confess that he is gay.”

“Saudi Arabia’s relentless policing of free expression reveals the hypocrisy of a government that has promised to carry out reforms,” said Michael Page, deputy Middle East director at Human Rights Watch. “Saudi authorities should do the right thing and immediately release the young man, who was only expressing his opinion.”

Saudi Arabia remains a dangerous place for LGBT individuals. Although the conservative Muslim country has no explicit laws covering sexual orientation or gender identity, judges turn to Islamic law to prescribe punishments for homosexual sex and other “immoral” acts.

After receiving death threats from armed groups, Bokari fled to Saudi Arabia from Yemen, which is embroiled in a civil war between a Saudi-led military coalition and the Iran-aligned Houthi rebels. Bokari has since been living in Riyadh as an undocumented migrant, and Human Rights Watch warned his deportation to Yemen would again put his life at risk.