Intel: AIPAC rebukes Democrats again for bill to keep US aid out of annexation

The American Israel Public Affairs Committee issued its third rebuke of Democratic lawmakers in as many weeks over their repeated attempts to keep Prime Minister Benjamin Netanyahu from annexing significant portions of the West Bank. 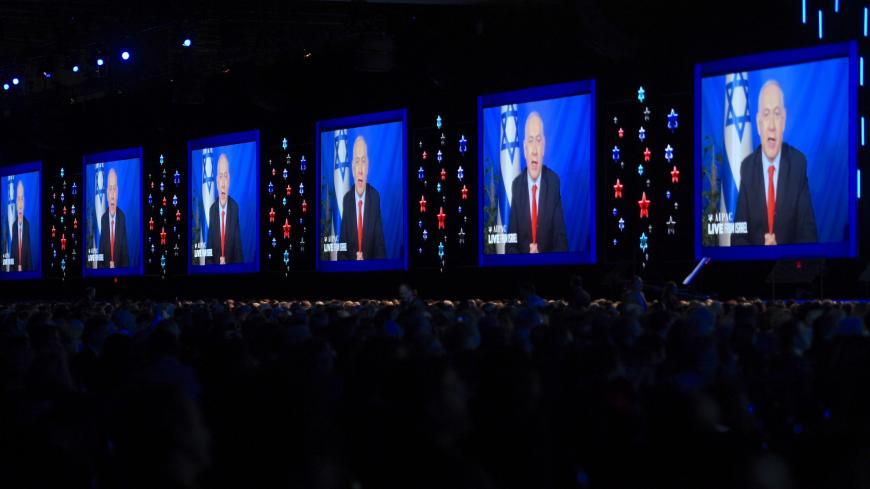 Prime Minister of Israel Benjamin Netanyahu speaks on screen from Israel during the AIPAC annual meeting in Washington, DC, on March 26, 2019. - JIM WATSON/AFP via Getty Images

The American Israel Public Affairs Committee (AIPAC) issued its third rebuke of Democratic lawmakers in as many weeks over their repeated attempts to keep Prime Minister Benjamin Netanyahu from annexing significant portions of the West Bank.

The powerful lobby group’s latest salvo takes aim at legislation introduced by Senate Democrats that would bar the close US ally from using American military aid in “territories in the West Bank unilaterally annexed by Israel.” Sen. Chris Van Hollen, D-Md., and 12 other Democrats — including Appropriations Committee top Democrat Patrick Leahy of Vermont — introduced the legislation as an amendment to the annual defense bill.

In a lengthy Twitter thread, AIPAC argued that Van Hollen seeks to “ensure no US funds are used for annexation. But that’s already law. Aid can only be used for ‘internal security, for legitimate self-defense.’ This amendment goes far beyond current law in ways that jeopardize Israel’s security.”

After contending that current law already bars Israel from using US military aid to annex Palestinian territory, AIPAC nonetheless went on to assert that the amendment “undermines Israel’s security by prohibiting it from using US-made equipment to defend itself in a variety of foreseeable scenarios” and that it “restricts where Israel can place lifesaving missile defense systems like Iron Dome.”

Van Hollen acknowledged in a statement upon introducing the legislation last week that “no US funds are currently being expended on unilateral annexation,” noting that his amendment “would ensure that remains the case.”

“I am a strong supporter of robust security assistance to our friend and ally Israel,” said Van Hollen. “However, I oppose the use of any of these funds to support the unilateral annexation of Palestinian territories by Israel.”

AIPAC’s major rival, J Street, tweeted that it “supports this amendment, which reaffirms US support for Israel’s security [and] opposes annexation.”

Why it matters:  AIPAC has long prided itself on its ability to effectively work with both parties, but the annexation debate has further strained its history of bipartisanship, adding to the partisan stress it has accrued in recent years by lobbying against the Iran nuclear deal and in favor of anti-boycott legislation.

The group’s lobbyists went to bat against an anti-annexation letter to Israeli leaders last month that was signed by the majority of the House Democratic caucus, including some of its closest allies such as Majority Leader Steny Hoyer, D-Md., and Middle East panel Chairman Ted Deutch, D-Fla. That letter made no mention of US military assistance, but AIPAC also condemned a separate letter led by Rep. Alexandria Ocasio-Cortez, D-NY., and 11 other progressive lawmakers that threatened to restrict a portion of Israel’s annual $3.8 billion in US military aid should it move ahead with annexation.

The lobby group maintains that it does not have a formal position on annexation, but in March AIPAC President Betsy Berns Korn praised President Donald Trump’s peace proposal, which greenlights Israeli annexation of its West Bank settlements and the entire Jordan Valley.

What’s next:  Van Hollen’s amendment is unlikely to advance at all in the Republican-held Senate. AIPAC has also started to highlight former Vice President Joe Biden’s opposition to conditioning Israeli military assistance while pushing back against Democratic lawmakers — even as the rival lobby group J Street pushes for aid restrictions. Two of Biden’s former left-wing rivals for the Democratic presidential nomination — Sens. Bernie Sanders of Vermont and Elizabeth Warren of Massachusetts — co-sponsored the Van Hollen amendment.

Know more:  Annexation is still on the table, but Netanyahu wasn’t able to make it happen by July 1 as he had initially hoped. Mazal Mualem explains why.