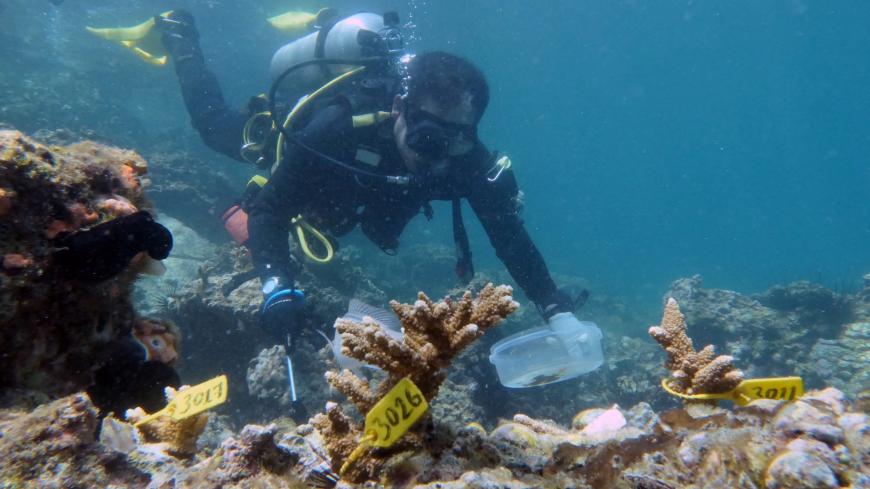 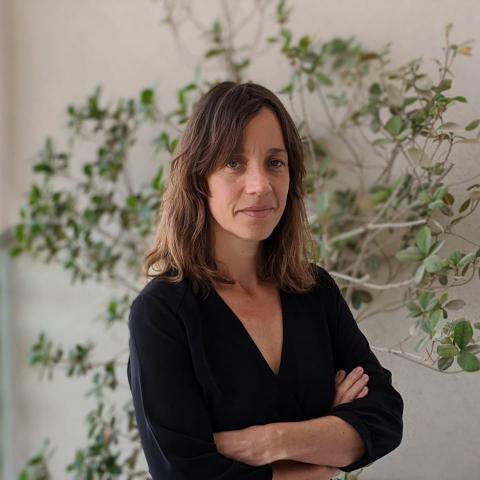 A thunderstorm is growling in the distance while marine biologists Matt Mitchell and Noura al-Mansoori help Dain McParland, the captain, to load a boat with diving gear. December is around the corner and Abu Dhabi is experiencing one of its rare rainy days. The crew knows that it will have to complete its mission quickly. Mansoori, one of the few female Emiratis in the discipline, carries with her a hammer to retrieve cubes of dead coral that she had placed underwater months before. Mitchell, a jovial British citizen, wants to place sensors to collect information on marine sediments.

The 10-meter Arabian Craft soon leaves its mooring in a small harbor nestled between the presidential palace and the seven-star hotel Emirates Palace. The boat speeds to its destination. Al-Dhabiya, west of the UAE capital, is one of the biologists’ main research sites. The patchy coral reef is close to the shore in a protected marine area where fishing is not allowed. While the reef has a lower biodiversity and less coral cover than other iconic spots in Indonesia or Australia, its ability to endure extreme weather conditions makes it exceptional.

In the Persian Gulf, a semi-enclosed sea between the Arabian Peninsula and the Iranian plateau, the coral reefs are able to handle temperatures up to 36 degrees Celsius. Elsewhere in the world, these sensitive ecosystems cannot survive beyond 32 degrees. The Gulf corals' remarkable resilience to warmer temperatures is a mystery that the marine biology laboratory at New York University Abu Dhabi, where Mansoori and Mitchell work as researchers, has been trying to uncover for the past 10 years.

Founded by John Burt, a Canadian biologist who fled the freezing waters of his home country, the lab is one of the few academic research centers in the region. Its main focus is on coral reef ecology. By combining different approaches — genomic, molecular, physiological and ecological — the biologists explore how reef fauna is able to cope with extreme temperatures. They hope their findings may help assess the impacts of climate change on these precious marine habitats.

In al-Dhabiya, Mitchell and Mansoori, who are very familiar with the setting, quickly disappear underwater. McParland, watches as the wind picks up. “We set off as soon as there is foam on the waves,” he says to Al-Monitor’s correspondent, who joined the team on the trip. When Mansoori pulls herself back on board, she carries several cubes of dead coral in plastic bags. Thanks to this technique — the cubes were left on the reef but were not part of its living structure — she can study bioerosion without harming the reef. Mitchell has his immersed sensors, which will help him discern how the water quality affects fish behavior.

Fish are Mitchell's specialty. He focuses on those that can be found swimming around the reefs: Arabian angelfish, Blackspot snapper, Monocle bream, Starry-eyed blenny and two-spot cardinalfish. In al-Dhabiya, Mitchell regularly captures samples to bring back to the lab. In a room equipped with tanks, temperature control instruments and cameras, the biologist runs several experiments with his colleague Grace Vaughan. They look at the fish's swimming performance, a vital behavior that affects all aspects of their life: their capacity to migrate, reproduce, forage and avoid predators.

One of their regular tests involves putting the fish in a tank where they have to swim against a strong current. “It is like a treadmill for fish,” Mitchell explains to Al-Monitor. “We measure their oxygen consumption to see how their metabolism is changing with temperature and how this affects their performance.” The tanks are set at different temperatures to reproduce the high variations in the sea. In the Arabian Gulf, fish not only have to survive extremely high temperatures in the summer, they also have to adapt to temperatures that can drop to 18 degrees in the winter.

The scientists are amazed by how well the fish perform at the highest temperatures. Despite the huge metabolic demands, they still swim very fast. “When temperature increases, fish need more energy to meet basic demands,” Vaughan clarifies. “Beyond a certain point, their cardiovascular system is unable to supply oxygen at the rate needed to perform tasks such as feeding or escaping prey.” But Gulf fish keep swimming vigorously. “Not anywhere in the world can fish maintain their essential activities in such high temperature,” Vaughan marveled.

The lab’s observations match the data collected in the field. In the summer, the reefs are teeming with life. The biologists are not so adaptable — at that time of the year, they sometimes dive with hydration backpacks. They suspect that the secret of Gulf fish's survival may hide in their heart and gills. When the temperature gets warmer, their heart muscle may grow thicker to pump more blood and their gills may change shape to increase the surface area through which they capture oxygen. “There are likely several ways to explain how fish have adapted but we are currently exploring this theory,” Vaughan says.

These remarkable capacities for adaption should not mislead us, though. While they have the highest thermal limits in the world, Gulf coral reef fauna is not immune to extreme temperature anomalies. The Persian Gulf is warming at nearly double the global average. It is difficult to predict how marine life that lives near the threshold of its thermal tolerance will react to further increases in sea temperatures. A severe bleaching episode at the end of summer 2017 was taken as an ominous sign. “Many of us cried,” Vaughan recalls.