The battle between the haves and the have-nots within the ruling party base is intensifying. 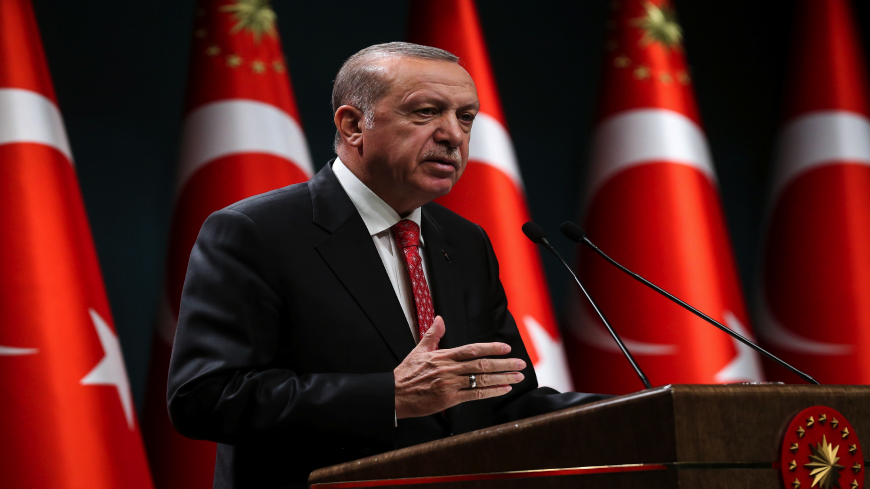 A Turkish court on June 19 banned access to content in a title on The Sour Dictionary, one of the most popular social media platforms in Turkey. That title is “Emine Erdogan’s Purse.” It's about a notorious handbag that cost some $50,000, and it has become a symbol of public criticism of the lavish lifestyle of the president’s family and palace life. The court has banned reader access to more than 200,000 entries on The Sour Dictionary.

There is an intriguing pattern in Turkey's political scene. State oppression on freedom of expression and access to information is worsening. All the while, public chatter — particularly from the ruling Justice and Development Party’s (AKP) conservative base, who are mostly small-business owners — is increasingly critical. The recent events increased the visibility of fast-brewing social tension. Even the AKP’s most loyal supporters are asking where the money is — or, in other words, is this how state funds are being spent?

On June 15, a donation campaign led to street protests and clashes between AKP supporters and security forces in Ankara. After the 2016 failed coup attempt, Recep Tayyip Erdogan had declared that all of those who lost their lives were “martyrs,” and all of those who were wounded were “veterans.” These terms not only have religious connotations but also financial payoffs such as monthly salaries. Normally reserved for active duty soldiers or security personnel, the titles, benefits and salaries are structured accordingly.

After the coup attempt, Erdogan said “these martyrs and veterans are my real siblings. Anyone who hurts them should know that they will have to answer to me.” And it was Binali Yildirim, then prime minister, who announced, “Anyone with even a nail scratched on July 15 will be considered a veteran.” The campaign raised more than 300 million Turkish liras, which became 339 million Turkish liras in December 2019 at the bank with interest, Turkish Vice President Fuat Oktay announced.

On June 8, after months of negotiations and delays, a group of veterans began a protest in Ankara over why they still had not obtained proper official veteran status and had not been given the money they were promised four years ago.

On June 15, reportedly based on a tip that Erdogan was in the building, they marched in front of AKP headquarters in Ankara. Their chants were harsh. Some included, “Soylu (Interior Minister) come here," "The center of the Gulen terror organization is here (pointing to AKP headquarters),” and “Traitors and crooks.” Police brutally charged at the veterans.

A day after the protests, ultranationalist Good Party’s proposal for immediate payment to the veterans was shot down by AKP and Nationalist Movement Party votes. And after speaking with the interior minister, protesters decided to stand down.

A senior AKP bureaucrat told Al-Monitor on the condition of anonymity that “these people are like the Janissaries of Erdogan. Now they are flipping their cauldrons and threatening the government to meet their demands.” Turning their big pots upside down was how Ottoman soldiers signaled their unhappiness to the sultan.

The senior bureaucrat added, “On the night of the coup, these people organized through WhatsApp chat rooms to defend Erdogan. There are now about 2,700 who were promised benefits and pay. Only about 250 to 300, I believe, received proper payoff. About 1,500 of the veterans or their immediate family members have been provided government jobs.” The bureaucrat was candid that unrealistic promises were made to these men. "It will be more difficult to find martyrs for Erdogan next time around,” he joked.

Although negotiations between veterans and government representatives have been ongoing, these men are angry that their rights were blocked by Gulen members still in the government. The government has been quite worried about their protests and tried to dissuade them from taking to the streets. Veterans explained that the officials offered to pay them 1,000 Turkish lira ($146) through the foundation to appease them, but the sizable group that came out to protest refused the offer.

Prominent political analyst and author Levent Gultekin told Al-Monitor he did not view the protest as the Janissaries’ revolt. “I rather see that people who have been devoted Erdogan supporters react emotionally due to their disappointments. They have been pushed to the background as Erdogan’s alliance with the ultranationalists and other groups expand.” Gultekin explained that he views the newly created parties of former top AKP elites as a reflection of this alienation and disappointment. Erdogan is known to turn the tables around on his core supporters — conservatives and Muslim Brotherhood sympathizers — such as those who were victims of the Mavi Marmara flotilla. After supporting their cause for years, in 2016 Erdogan abruptly disowned them.

Another problem here is the issue of diminishing resources, which has challenged Erdogan’s clientelist relations with his base. The idea that the AKP — like any other political party — is corrupt but is at least “getting business done” is to a large extent based on the returns these groups received for their loyalty and, as Gultekin emphasized, “the public’s lack of trust toward the alternatives.” Now, these returns are not trickling down and there are alternatives. Opposition mayors are transparent in their budgets. They take pride in being accountable and broadcast live their decision-making gatherings.

There were big promises made right after the coup attempt and during the transition into the presidential system, and now unfulfilled expectations are generating frustration. Disillusionment leads to louder demands to know where all the government funds are being spent.

Gultekin attributes the indifference of the AKP base to significant corruption allegations to the polarization in the country. “The base believes these are exaggerated claims. However, on minor issues such as a fee on plastic bags, which hits their own interests directly, there is an outcry.” Erdogan must be aware of the growing discontent — in April, banks provided credit for over 300,000 small-business owners.

These types of public outbursts and clashes with police are rare ruptures in the AKP’s voter base, but times are changing. Today, even the most dedicated AKP members whisper jokes about the lavish Palace lifestyle and the infamous purse in friendly circles.