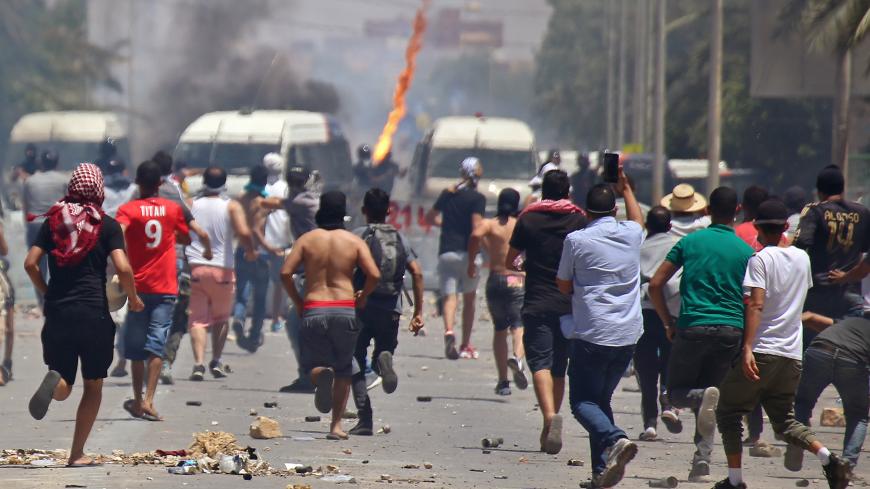 Tunisian protesters clash with security forces as they demonstrate in the southern city of Tataouine on June 22, 2020, demanding authorities make good on a 2017 promise to provide jobs in the gas and oil sector to thousands of unemployed. - FATHI NASRI/AFP via Getty Images

Nine years after the uprising that toppled Tunisia’s longtime dictator Zine El Abidine Ben Ali and set off the region’s Arab Spring revolutions, the country is once again gripped by anti-government protests. In the city of Tataouine, where unemployment hovers around 30%, protesters are demanding the government fulfill promises made in June 2017 to create more jobs in the oil and gas sectors.

A three-month-long sit-in that year, during which protesters blockaded two oil and gas pumping stations, ended with the unemployment minister pledging to create thousands of jobs and allocate more than $30 million for a development fund.

The trade union in Tataouine says the government never followed through on its promise, and it has called for a strike among its members.

The widespread unemployment is set to worsen across the North African country by the end of the year, from 15% to 21.6%, a United Nations study estimated. The International Monetary Fund expects Tunisia’s economy in 2020 to contract by 4.3%, its deepest recession since independence in 1956.

The largely peaceful demonstrations turned chaotic Monday as protesters demanded the release of Tarek Haddad, an activist they say was arrested during the previous night’s unrest. Agence France-Presse reports protesters hurling stones were met with tear gas from police.

According to the Interior Ministry, 10 people were arrested for attacking police stations with Molotov cocktails.