While US and international sanctions aren't specifically targeted at Kurdish-ruled northeast Syria, the area is impacted all the same with trade practically halted and because of the sudden plunge of the Syrian pound. 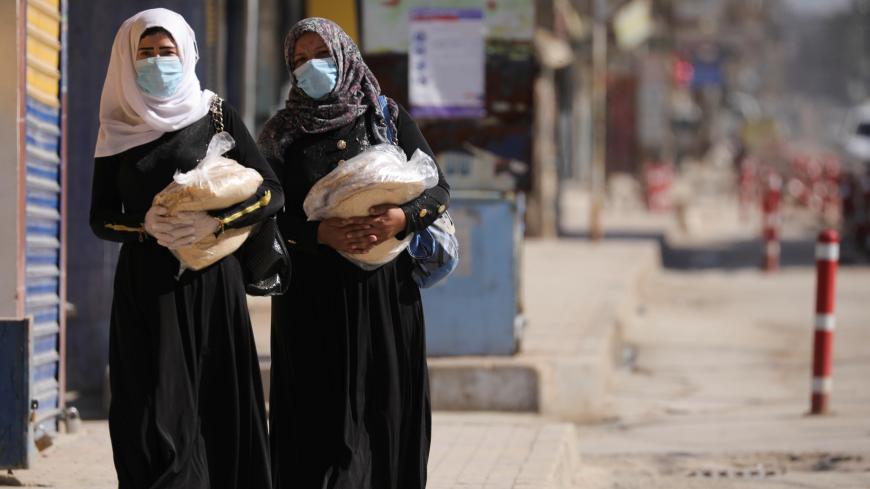 Women hold stacks of bread as they walk along an empty street, as restrictions are imposed as measure to prevent the spread of the coronavirus disease (COVID-19) in Qamishli, Syria March 23, 2020. - REUTERS/Rodi Said

Officials from northeast Syria’s Kurdish-led Autonomous Administration say their region is entering an economic crisis as US and international sanctions on Syria’s central government in Damascus have helped send the country’s currency into free fall.

The Syrian pound sunk below 3,000-to-one US dollar over the weekend, with a new round of US sanctions under Congress’ Caesar Act expected to kick in next week.

The sanctions do not directly target the Autonomous Administration, which is tied to a Kurdish-led alliance of militias known as the Syrian Democratic Forces (SDF). The SDF took control of northeast Syria, with a population of some 4 million, with the support of the US-led international military coalition during the war against the Islamic State. But the US has not supported the Autonomous Administration, which has more than 100,000 employees, so a significant part of its revenue comes from selling oil and grain to the Assad regime.

The Autonomous Administration has formed an economic crisis body to help brace for the impending effect of new sanctions. On Saturday, the administration announced it will purchase wheat from local farmers at a rate based on the dollar, eschewing the unstable Syrian pound. The price has been set at $0.17 per kilogram.

“It’s better than the rate [offered by] the Syrian regime,” said Fahad Fatah, who owns a wheat field near Qamishli. “The situation in general here is a catastrophe.”

The administration forbade the selling of wheat outside of areas if its control last week, snubbing the Syrian central government in Damascus, which has vowed to recapture the autonomous northeast rather than tolerate future autonomy. Many outdoor markets were closed this week in a number of cities from Manbij to Qamishli as traders sought to wait out the Syrian pound’s rapid plunge.

“What we are seeing in northeast Syria is, I would say, disastrous,” said Mohammed, who works on stabilization projects funded by USAID for Syria’s northeast. Mohammed spoke on the condition that only his first name would be used.

Senior Autonomous Administration officials Badran Jiakurd and Ilham Ahmed have said that Ambassador William Roebuck, a senior member of the US State Department’s Syria team, assured during a recent visit that their administration would be exempt from the upcoming sanctions — but what that means, they say, is not clear.

A senior northeast Syrian official told Al-Monitor that as of Monday, US officials have offered little explanation as to what sort of trade will still be feasible once the Caesar Act goes into effect.

Complicating the picture, the State Department has declined to confirm Roebuck’s alleged assurances. “We do not comment on the substance of private, diplomatic conversations or preview potential sanctions designations,” a State Department spokesperson contacted via email told Al-Monitor.

Though American diplomats have signaled lenience to northeast Syrian officials in applying the restrictions, many businessmen who facilitate trade between the Autonomous Administration and the regime will be sanctioned, according to Dareen Khalifa, senior Syria analyst at International Crisis Group.

“What the Autonomous Administration is not going to be spared of is the rapid depreciation of the Syrian lira,” Khalifa told Al-Monitor by phone.

Another concern is the discretionary application of Caesar sanctions, and whether Washington officials in the future will apply them consistently, Khalifa said.

“Trade is nearly stopped. Markets are not functioning. Nobody is selling or buying anything,” Mohammed told Al-Monitor

“We don’t see any moves of the Americans trying to help,” Mohammed said. “Only the average Syrians will be impacted [by the sanctions]."

The only open border crossing connecting northeast Syria to foreign trade lies at Semalka, which leads to the Kurdistan Region of Iraq. State Department efforts to convince Russia to open a new border crossing between Iraq and northeast Syria have so far made little headway, and the only airport in the autonomous region is controlled by the Syrian regime.

Still, the economies are deeply intertwined, and most market commodities sold in the northeast come from government-controlled areas.

There is no sign that Washington intends toto change course on its Syria policy any time soon, as State Department officials say they have interpreted the Assad regime’s moves to isolate tycoon Rami Makhlouf with cautioned optimism that the sanctions may be working.

“My recipe is more of the same,” said James Jeffrey, the State Department’s top official on Syria policy, last month.

The United States has rallied its allies around the world not to provide reconstruction aid to areas under Assad regime control in a bid to force the regime to adopt significant political reforms after nine years of brutal civil war.