A video reportedly showing detained women inside a secret prison in Afrin has prompted further criticism of Turkey's proxy forces operating in Syria. 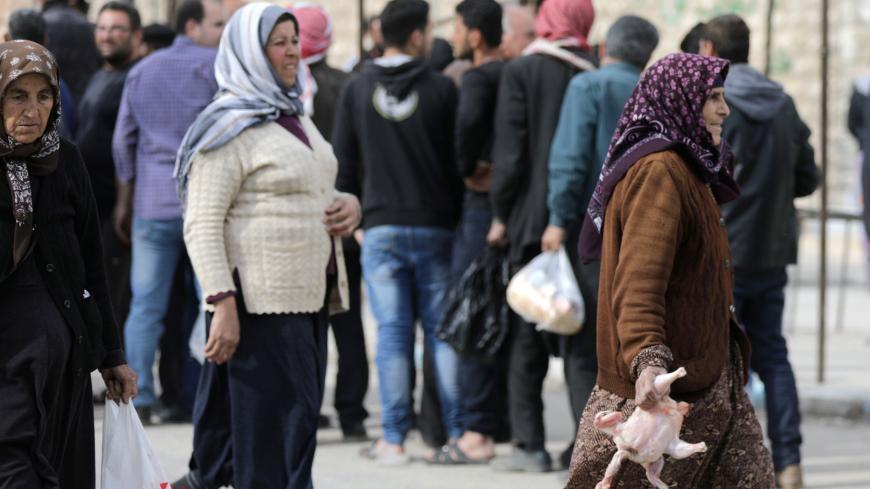 A video showing Kurdish women believed to have been kidnapped by a rebel group in the northern Syrian city of Afrin has renewed calls for an independent investigation of Turkey’s proxy forces operating in the region.

After deadly clashes erupted last week among various Turkey-backed factions in the city, fighters from the Jaysh al-Islam group reportedly attacked a detention center run by another Turkey-back faction, Hamza Division. Kurdish authorities say a video that emerged on social media shows eight women inside the secret prison, all of whom were abducted for ransom and found naked and abused.

“They were subjected to all sorts of immoral treatment and abuses by the notorious groups linked to Turkey," the Kurdish-led autonomous administration said in a statement. “We demand an international investigation to hold the perpetrators accountable for these violations.”

TEV-DEM, an umbrella group of Syrian Kurdish parties, called the kidnapping “an insult to women all over the world,” and said the responsibility lies with the United Nations, “which has lost its legitimate role in the region.”

The multi-ethnic city of Afrin has been gripped by violence since Turkey, backed by Free Syrian Army rebels, took control in March 2018 after a two-month-long offensive against the Kurdish militia known as the People’s Protection Units (YPG).

Ankara views the YPG, which makes up the backbone of the US-allied Syrian Democratic Forces (SDF), as an offshoot of the banned Kurdistan Workers Party (PKK) and has sought to push the group away from its border through a series of military campaigns in recent years.

Human rights organizations have since detailed widespread abuses in parts of Syria under Turkish control, including arbitrary detentions, enforced disappearances and confiscation of property. A 2018 UN report noted that many civilians from Afrin returned to find their homes occupied by ethnic Arabs from elsewhere in Syria.

“I don’t think that the Turkish army wants to prevent it because the goal is to cleanse the Kurdish population from this area,” said Fabrice Balanche, a Syria expert and an associate professor at France’s Lyon II University.

“These groups are not well disciplined. They do what they want,” Balanche said of Turkey’s proxy force in the region, the Syrian National Army.

The coalition, formerly known as the Free Syrian Army, consists of both moderate Syrian rebels who once fought the regime and hard-line factions.

“The people who are doing all these things in Afrin, they are not so different from ISIS,” said Sinam Mohamad, the US representative of the Syrian Democratic Council, the political arm of the SDF.

Mohamad, who is from Afrin but works in Washington, said her family’s homes and factory were seized by rebel groups.

“You work all your life for having these things for your children and suddenly you have nothing. All has gone to these mercenaries,” she said. “We ask for the international community to intervene, so the people of Afrin can go back to their city.”

The calls for an investigation have been echoed by Yazidis who say their small religious community, long persecuted by the Islamic State in Iraq and Syria, is also targeted.

The advocacy group Yazda reports that since Turkey’s military incursion in October 2019, thousands of Yazidis from 22 villages across the region have fled their homes, including 3,000 from Afrin. Rebel fighters in the city destroyed 18 Yazidi shrines, and most recently looted a Yazidi cemetery in the village of Jan Tamer, the group says.

“After 2014 in Sinjar, there was widespread outrage about how this could have been allowed to happen,” Pari Ibrahim, founder and executive director of the Free Yezidi Foundation, told Al-Monitor over email.

“This is not on the same scale, of course, but similar patterns and similar actors. And the same mentality — extremist militias cleansing areas through force and commission of atrocities. It is as though the world has learned nothing."

Following Turkey’s offensive last year on Kurdish-held territory, during which one of its factions carried out a roadside execution of a prominent female politician, Ankara said it would investigate any potential human rights violations. The Syrian National Army also said it would form an investigative committee of its own.

But if Turkey isn’t willing or able to hold its allied troops accountable, there are few alternatives for justice.

The international community has shown little appetite to set up a tribunal or ad hoc court to prosecute the myriad war crimes committed by the various warring parties during Syria’s nine-year-long war. The International Criminal Court in the Hague is also out of the question as the Syrian government is not a member state, and the workaround — a referral from the United Nations Security Council — is subject to Russian and Chinese vetoes.

In Europe, a handful of one-off cases of members of the Islamic State or the Syrian regime are being tried in national courts under the concept of universal jurisdiction. While a positive step, those individual trials are far from comprehensive, said Roger Lu Phillips, a human rights lawyer with the Syria Justice and Accountability Centre in Washington.

“It’s time to start thinking out of the box a little. The European Court of Human Rights presented itself as an opportunity,” Phillips said.

Turkey must adhere to the standards of European Convention on Human Rights, of which it is a state party, not just within its own borders but also in areas under its effective control. Given the military operation and the administrative functions carried out by Turkey in Afrin, residents could make a strong case that Turkey is an occupying force and seek redress in the European court, said Phillips.

For now, women’s organizations in northeast Syria are urging governments to “break their silence” and form an independent inquiry over the treatment of local women by Turkey’s proxies.

“Despite all the practices to which women are subjected and which aim to break the conscious and organised will of women, their insistence on resistance and their struggle to build a free and democratic society [has] made them a symbol,” they wrote.