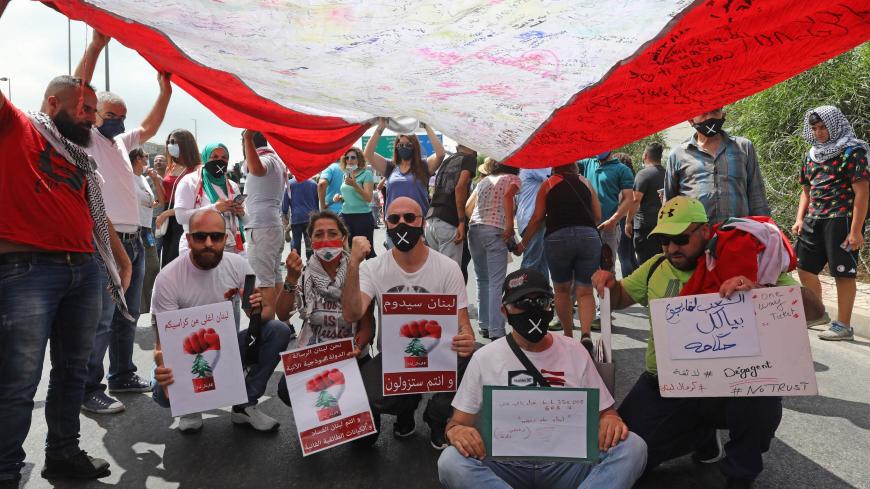 Lebanese anti-government protesters carry a large national flag during a demonstration near the presidential palace in Baabda, east of Beirut, on June 25, 2020. - ANWAR AMRO/AFP via Getty Images

Demonstrators gathered at Beirut’s Palace of Justice to demand the release of 21 protesters arrested earlier this week on charges of vandalism. According to the Daily Star newspaper, clashes with police broke out as protesters moved closer to the gate.

The National News Agency reported today that protesters had set fire to tires and waste containers to block traffic throughout Lebanon.

Protesters started taking to the streets in October, angry over government corruption and economic mismanagement, high youth unemployment and a lack of basic services. Within weeks, Prime Minister Saad Hariri had stepped down.

The protests, originally sparked over a tax on WhatsApp calls, have grown sectarian in nature. Some demonstrators are calling for the Shiite organization Hezbollah to disarm in what is seen as a controversial move.

With the Lebanese pound losing some 75% of its value on the parallel market since October, the small Mediterranean country is experiencing its worst financial crisis since the 1975-1990 civil war. The currency — which has been officially pegged at 1,507 to the US dollar since 1997 — traded above 6,000 to the dollar on the parallel market this week.

On Wednesday, parliament speaker Nabih Berri urged the government and banks to declare a “financial state of emergency” and consider all options for protecting the plunging currency.

“From now on, it is unacceptable to turn the Lebanese into hostages to the black markets of currency, food, medicine, and fuel,” Berri said.

Lebanon, which defaulted on its sovereign debt in March, is holding talks with the International Monetary Fund over a possible rescue deal. The IMF has indicated the billions in aid Lebanon is seeking would be dependent on the government first undertaking a series of reforms.

In January, Prime Minister Hassan Diab pledged he would make good on long-overdue political reforms, which protesters and potential foreign donors say have yet to materialize in the much-indebted country.