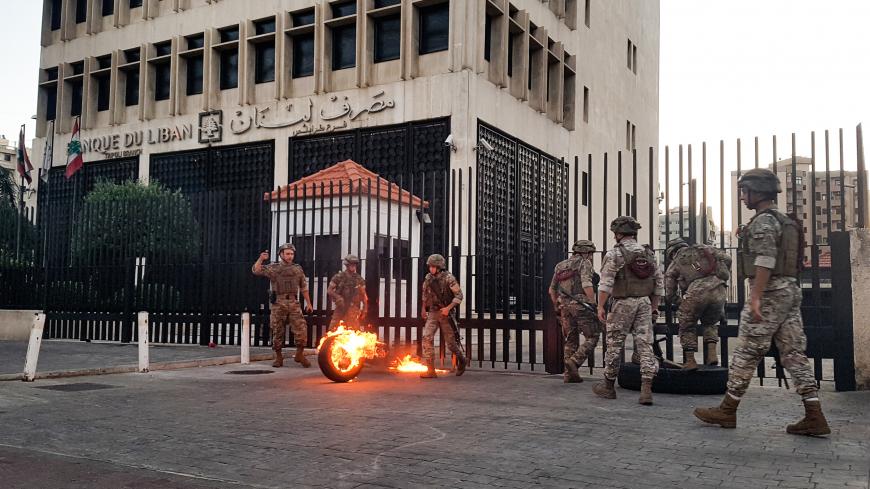 Lebanese army soldiers roll a flaming tire away from the fence surrounding the local branch of the Lebanese Central Bank as protesters gather to demonstrate against dire economic conditions in the northern city of Tripoli on June 11, 2020. - FATHI AL-MASRI/AFP via Getty Images

Lebanese banks raised the exchange rate of the Lebanese pound to the dollar today, further contributing to the currency’s fall as the country plunges deeper into a financial crisis.

Banks are now trading the pound at 3,850 to the US dollar, according to Reuters.

The pound has lost more than 75% of its value since anti-government protests started in October, and the depreciation is a major contributor to ongoing demonstrations. Banks instituted withdrawal restrictions at the time, and there are a limited amount of dollars in circulation. The falling rates mean that many Lebanese have had their savings decrease dramatically, all while unemployment and poverty are rising amid the financial and coronavirus crises.

There are multiple exchange rates between Lebanese pounds and dollars in the country at present. Last week, the black market traded more than 6,000 pounds for $1. The official, longstanding rate of about 1,500 pounds to $1 remains, but is now only available for vital imports, according to Reuters. The bank rate is the third rate. Earlier in the month, the black market rate was around 4,000 pounds to the dollar, indicating further depreciation.

Protesters have attacked banks amid the unrest, showing the level of frustration with the economic situation. Lebanon has fared relatively well fighting the coronavirus pandemic, but the virus mitigation measures have further hurt the economy.

To help right its economy, Lebanon announced in April it was seeking billions in loans from the International Monetary Fund (IMF).

The negotiations appear to be hitting roadblocks, however. On Monday, Lebanon’s long-serving director-general of the Ministry of Finance Alain Bifani resigned. Bifani was a member of the government’s IMF negotiations team and the second to resign during the deliberations. In his outgoing remarks, he said the government was in a state of “denial” and “procrastination” regarding the crisis and the path to reform, Lebanese newspaper The Daily Star reported.