A white paper by the Amman-based think tank the Royal Aal al-Bayt Institute for Islamic Thought suggests 5,000 years of continuous Arab presence in Jerusalem, specifying the Hashemite custodianship of Christian and Muslim holy sites in the city. 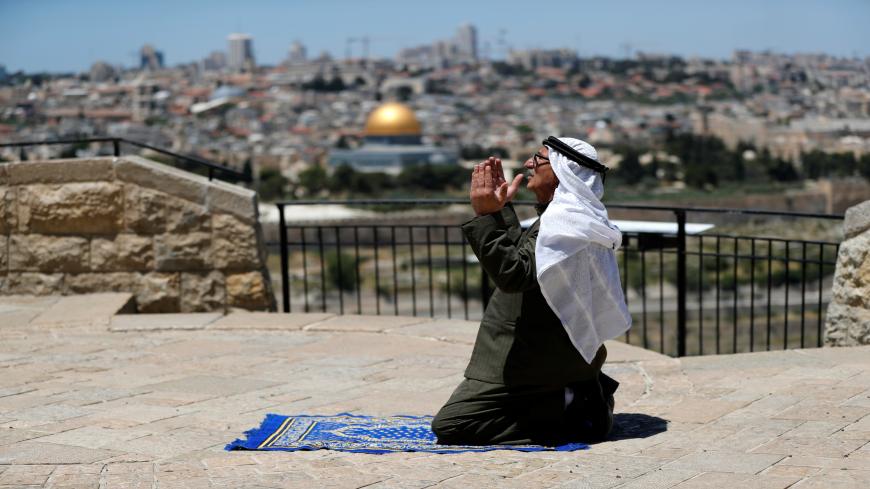 A Muslim worshipper offers his Friday Ramadan prayer outside Jerusalem's Old City amid the coronavirus restrictions, May 8, 2020.

At a time when the right-wing leaders of Israel are contemplating annexing further parts of the Palestinian occupied territories, a referenced and documented white paper has been produced and published by the prestigious Amman-based think tank Royal Aal al-Bayt Institute for Islamic Thought, documenting Arab presence in Jerusalem for over three millennia and specifying the Hashemite custodianship of Christian and Muslim holy sites in the city.

“The Arabs were the first inhabitants of Palestine in history, including in Jerusalem,” the 108-page paper begins. It references archaeological records where Jerusalem is mentioned by name in the Amarna Correspondence, a series of diplomatic letters between Canaanite city-state kings and their Egyptian overlords during the 14th-century B.C. It shows pictures of cuneiform tablets that were uncovered in Egypt in the late 19th century.

Mahdi Abdulhadi, founder and director of the Jerusalem-based PASSIA think tank, told Al-Monitor that the content of the paper represents a knowledge brief that genuinely reflects the reality in a scientific way, articulating the historic narrative that the streets and quarters of the Old City of Jerusalem have witnessed. He said, “This paper is the legal and legitimate umbrella reflecting what the Hashemites have been entrusted with since the Arab Renaissance till today in a way that ensures the national Palestinian narrative with the Arab and international one in protecting the city’s Arab identity.”

The Royal Aal al-Bayt Institute for Islamic Thought, an Islamic nongovernmental institute, has been headed since 2000 by Prince Ghazi bin Muhammad, the personal envoy and special adviser to Jordan's King Abdullah II.

The paper moves from archaeological discoveries to biblical records, quoting Genesis 10:1-20 that shows “the Arabs, Hamites, Canaanites and Jebusites were the original inhabitants of the land of Palestine, including the area of Jerusalem.” Canaanites and Jebusites were there long before (at least 2,000 years before) the Jews, and even long before Judaism was revealed.

While the focused biblical references are valuable in debunking various attempts to use religious text to deny Arab connections to the city, not everyone was excited about using the Bible to authenticate connectivity.

Bernard Sabella, an elected member of the Palestinian legislature representing Jerusalem’s Palestinian Christians, told Al-Monitor that the historic documents in the paper reflect the popular religious and official Palestinian position in support of the custodian role of the Hashemites. “The importance of this paper is that it comes at a time that the Israelis are doing their utmost to change the status quo in Jerusalem with special emphasis on Al-Aqsa Mosque/Haram Al-Sharif.

Sabella said that the paper debunks Israeli claims questioning the support of Christian leaders to the Jordanian Hashemites in guaranteeing the status quo in the holy city.

Former Palestinian ambassador to France Hind Khoury told Al-Monitor that while she is a strong supporter of the Hashemite custodianship of Jerusalem, she is not a big fan of using biblical texts for documenting the history of Jerusalem. “Biblical books are books of faith to the believers, and archaeologists including Israelis have shown contradictions between events in religious texts and the documented history of our region.”

Khoury is concerned that religious groups, especially Christian Zionists, have been using biblical texts for their own purposes to justify support for the occupation and annexation. “I am always worried about the danger of mixing between religion and politics. This has been the way that Zionists and their supporters have gone because it is easy to use religion to prove any point of view.”

The Jewish presence in Jerusalem is also not ignored. The word “Jew” is mentioned 65 times in the paper and the term “Jewish” is referred in document 34 times. The paper dedicates a section to the Jewish presence between 1000 B.C. and 600 B.C. talking about the Prophet-King David who conquered Jerusalem, which became the capital of his kingdom. The paper also talks about Jerusalem as a mixed Jewish city in the period 539 B.C.-37 B.C.

The white paper acknowledges that the religious demographics of Jerusalem changed dramatically in the 20th century. In 1947, the city’s population was 33,600 Arabs and 2,400 Jews.

Yonatan Mizrachi, CEO of Emek Shaveh, an Israeli nongovernmental organization working to defend cultural heritage rights and to protect ancient sites, told Al-Monitor, “While the historic timeline looks fine to me, I disagree that Arabs have been here before the time of King David. I don't think that Canaanites are the Arabs’ ancestors.”

In summary, the white paper argues that contrary to the misperception that Islam is a stranger to Jerusalem, Islam has been dominant in Jerusalem for longer in total than either Christianity or Judaism, despite being the youngest of the three religions.

Reverend David Rihani, deputy chair of the Jordan Evangelical Council and the head of the Assemblies of God Churches in Jordan, told Al-Monitor that the role of Hashemites to Jerusalem is well known and appreciated by all Arab Christians. “We strongly support and endorse the Hashemite custodianship and have been impressed by the high level of interest and support His Majesty the King has shown to Jerusalem’s Christian as well as Muslim sites.”

The Al-Aqsa Mosque/Haram Al-Sharif — and by extension the whole ancient city of Jerusalem — is one of Islam’s three holy sites. The paper refutes the often-repeated argument by those who claim that Jerusalem is not mentioned in the Islamic holy book. According to the classical commentaries on the Quran, "the city," "the land," "the Holy Land," "the Mount," "the Temple" and "the Olive" all refer to Jerusalem, or places in Jerusalem, the paper states.