Iran officials weigh in on US protests

In today's Iran media review, Iranian officials have called out the United States over its response to peaceful protests. 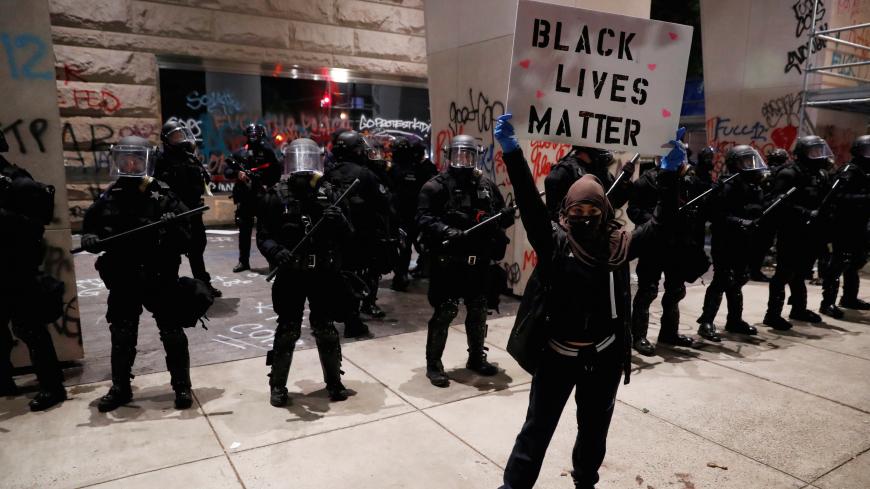 Protesters rally against the death in Minneapolis police custody of George Floyd, in Portland, Oregon, US, May 31, 2020. - REUTERS/Terray Sylvester

Mousavi, speaking in English, said, “To the American people, the world has heard your outcry over the State oppression; the world is standing with you.” He continued, “The American regime is pursuing violence and bullying at home and abroad. We are greatly regretful to see, along with people across the world, the [violent] incidences of US police that have recently unfolded. We deeply regret to see [that] the American people who peacefully seek respect … are suppressed indiscriminately and met [with the] utmost violence."

Mousavi added, “To the American officials and police, stop violence against your people and let them breathe.”

Iran’s Foreign Minister Mohammad Javad Zarif also took to Twitter to call out the United States over the protests. Reprinting a US State Department press release about protests in Iran and crossing out Iran and replacing it with the United States in the title, Zarif tweeted May 30, “Some don’t think Black Lives Matter. To those of us who do: it is long overdue for the entire world to wage war against racism.”

Comments by Zarif and Mousavi are aimed primarily at the United States and Secretary of State Mike Pompeo for expressing support for protests in Iran. Iran has always maintained that protests in their country were an internal affair and have rejected any comments and/or statements by either the United States or countries within the European Union.

Interestingly, at this moment, the current interior minister took the time to talk about the number of Iranians killed in last year's November protests that erupted when President Hassan Rouhani suddenly ordered a reduction in fuel subsidies. The country underwent a near total shutdown of the internet, and much of what happened during that time has remained a mystery. Officials have not been forthcoming about the total number killed in those protests despite calls by members of parliament to release the actual death tolls.

During a television interview May 30, Interior Minister Abdolreza Rahmani Fazli said the death toll was 200 to 225. He added that 20% of the deaths were due to guns not used by the security forces, suggesting armed groups had killed them, and he considered those who died to be “martyrs.” Comparing the responses to protests, Rahmani Fazli then said of President Donald Trump’s tweets, “They state publicly you’ll be encountered with our vicious dogs and our weapons. Trump himself is giving orders to shoot.”

Mojtaba Zolnour, who was head of parliament’s National Security and Foreign Policy commission during the Iranian protests, said June 1 the exact number killed during the country’s protests is 230. He said nearly 500 government and private buildings were damaged during those protests. Zolnour added that outside figures given about the number of deaths were lies. Opposition Green Movement's website put the number of deaths at more than 600, and Reuters claims the number is 1,500.