As tensions increased between Sudan and Ethiopia, Egypt quickly intervened to push Khartoum to its side as trilateral negotiations on the Nile dam hit a wall over Addis Ababa’s insistence to start filling the dam in July. 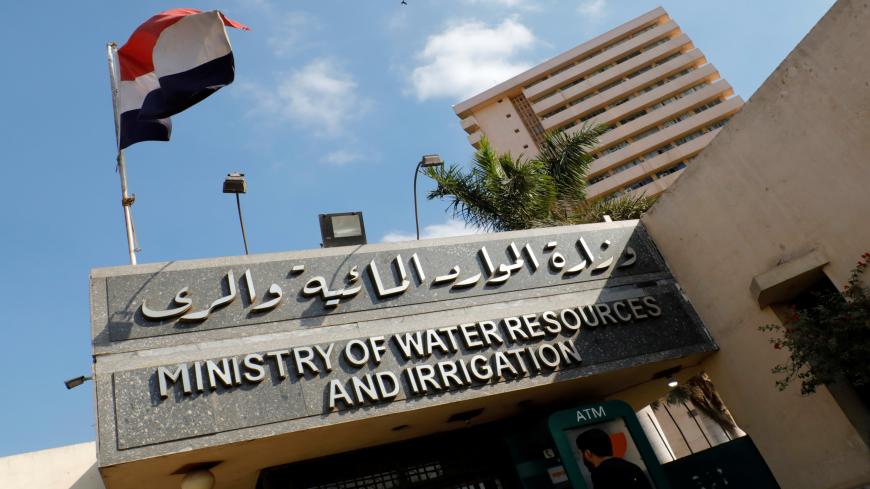 A man walks in front of the Ministry of Water Resources and Irrigation headquarters in Cairo during a meeting between Egypt, Ethiopia and Sudan over the disputed Nile dam, Egypt, Dec. 3, 2019.

CAIRO — The border between Sudan and Ethiopia has been the stage of serious tensions and unprecedented escalation from the Sudanese side, after a Sudanese officer was killed and several civilians and military officers were injured in clashes between the Sudanese forces and an Ethiopian militia in Sudan’s al-Fashqa region on May 29. The Sudanese army officially accused the Ethiopian forces of backing the militia and warned of a full-blown war between the two countries.

The official spokesman for the Sudanese army, Brig. Amer Mohamed al-Hassan, said in a May 29 press statement, “Backed by the Ethiopian army, the militias have attacked many areas along the border between Ethiopia and Sudan and have confiscated Sudanese resources.”

On May 30, the Sudanese Ministry of Foreign Affairs recalled the Ethiopian charge d’affaires in Khartoum in a sign of protest against “the infiltration of Ethiopian militias, supported by the Ethiopian army, and their attack on Sudanese citizens and armed forces on Sudanese territories.” The ministry expressed its absolute denouncement of this egregious attack.

In an attempt to appease the situation, the Ethiopian Ministry of Foreign Affairs released a statement May 31, arguing that it sees “no reason for animosity between the two nations.” It called on Sudan to cooperate and jointly investigate the circumstances of the incident, saying, “We believe it is best to address such incidents through diplomatic dialogue based on friendly ties and peaceful coexistence between our countries.”

However, the Sudan Revolutionary Front called on the residents of eastern Sudan June 2 to join the ranks of armed forces for quick support to face any armed conflict between the two countries.

The clashes between the two sides coincided with regional tensions resulting from the failed negotiations in the Grand Ethiopian Renaissance Dam (GERD) issue between Egypt, Sudan and Ethiopia.

The US mediation failed to resolve the crisis, and Ethiopia declared its insistence on beginning to fill the dam in July.

The escalation between Sudan and Ethiopia sparked questions about its impact on the GERD negotiation track and whether it was possible for Egypt to intervene to support Sudan facing Ethiopia.

Former Egyptian Assistant Deputy Minister of African Affairs Mona Omar told Al-Monitor that the clashes on the Sudanese-Ethiopian borders did not happen overnight. Skirmishes between the two sides had been happening on the borders in the past few years because of natural resources and wide stretches of fertile land owned by Sudan. Ethiopia has always had its eye on them, but this is the first time Sudan escalates against Ethiopia to this extent and threatens to engage in a full-blown war.

Omar said that the meeting between the Sudanese and Egyptian chiefs of intelligence — after Chairman of the Sovereignty Council of Sudan Abdel Fattah Burhan threatened to ward off any attacks on the borders — indicates that Egypt wants to cement its ties with Sudan and win it over and pressure Ethiopia in the GERD issue.

This is especially true since Sudan was hostile toward Egypt and was more on Ethiopia’s side in the Nile dam dispute, according to Omar. Also, she added, Sudan showed hostility toward Egypt when it expressed reservations on Egypt’s draft resolution calling for Arab support in the Nile dam issue, which Egypt submitted to the Arab League.

On April 8, while checking on the 2nd Infantry Division that protects the eastern borders, Burhan threatened to stave off any attack on the borders. He said that he would not allow anyone to attack Sudanese territories.

On May 19, the Sudanese and Egyptian leaderships met in the presence of Egyptian Prime Minister Mustafa Madbouly and Sudanese Prime Minister Abdullah Hamdouk, in addition to the Egyptian and Sudanese ministers of foreign affairs and irrigation and chiefs of intelligence, to discuss the joint cooperation mechanisms between them and the GERD issue.

Meanwhile, Sudan had refused to endorse the draft resolution that Egypt proposed to the Arab League on March 5 to express solidarity with Egypt and Sudan in the GERD issue in order to preserve their interests. Sudan stated that the decision was not in its interest. On the same day, Sudanese Ambassador to Ethiopia Mokhtar Bilal Abdul Salam told the Ethiopian news agency that “Ethiopia is the real friend that we need” and called on comprehensive cooperation between them.

Samir Ghattas, Egyptian member of parliament and director of the Middle East Forum for Strategic Studies, told Al-Monitor that it is difficult for Egypt to aim for the GERD directly, because of the multiple regional parties participating in building it. The international community will not allow Egypt to deal a direct military blow to the GERD or to engage in a direct war with Ethiopia. But Egypt can help Sudan by signing military or security agreements without directly engaging in a confrontation with Ethiopia.

On July 17, 2019, Egyptian Chief of Staff Mohamed Farid discussed with Sudanese Chief of Staff Hashem Abdel Muttalib Ahmed Babakr ways to support the joint trainings, the military cooperation ties and the exchange of expertise between the armed forces of both countries, as well as the continuous joint efforts to secure the borders and fight terrorism.

Mohamed Mustafa Gamea, who writes for the London-based Raialyoum, told the BBC June 2 that the Sudanese armed forces are escalating because of the tight relations between Sudanese military officers in the Sovereignty Council of Sudan and Egyptian President Abdel Fattah al-Sisi. He said he was concerned Sudan might be exploited and pushed into fighting a proxy war on behalf of Egypt.

Ghattas said that Egypt’s quest to win Sudanese support in the GERD file is significant in turning the negotiations around in favor of Egypt. He noted that Egypt has always sought to pressure Sudan and win it over, but has never succeeded. He added that the Sudanese message to the United Nations Security Council shows a turning point in the Sudanese regime’s relations with Egypt.

On June 2, the Sudanese Ministry of Foreign Affairs sent a letter to the Security Council, calling for encouraging the parties concerned in the Nile dam dispute not to take any unilateral measures that might affect regional and international peace and security.