IHS Markit, a global information provider, shows how the private sector has suffered major blows in the UAE, Egypt and Saudi Arabia. 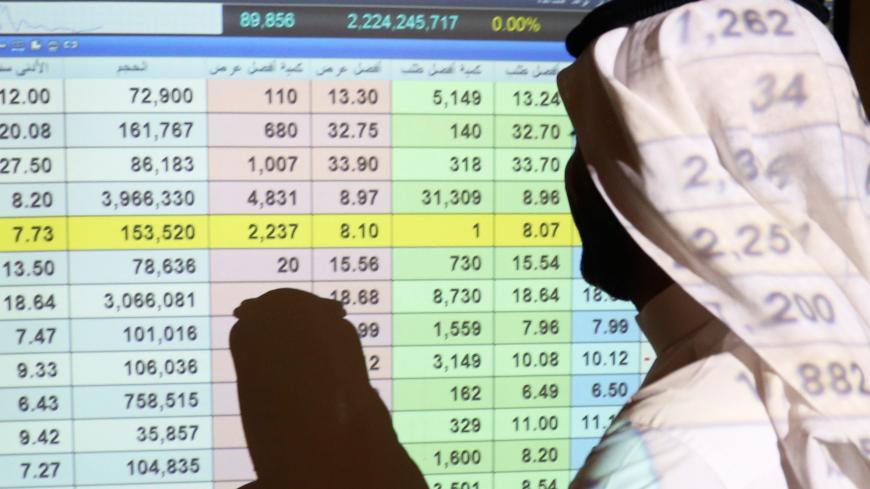 A Saudi man stands in front of a screen of stock prices at ANB Bank in Riyadh, Saudi Arabia, March 15, 2020. - REUTERS/Ahmed Yosri

The non-oil private sector outputs of three Middle Eastern countries dropped to their lowest points in years because of COVID-19, a global information services provider said today. The region is now starting to come out of its coronavirus-related lockdowns.

IHS Markit's Purchasing Managers’ Index for the United Arab Emirates, Saudi Arabia and Egypt, released today, is a measure of economic activity based on a survey of business executives in non-oil sectors. It is based on purchases, employment, staff costs, orders, delivery times, construction, exports and an array of other factors.

In the UAE, the index score fell to its lowest point since 2010, when IHS began doing the survey there. Its score of 44.1 for April indicates economic contraction, which begins at a score of 50. This was the second month in a row the UAE received its lowest score ever. The score was 45.2 in March, according to an IHS Markit press release.

"The full month of lockdown measures and business restrictions led to a steep decline in UAE non-oil private sector activity in April,” IHS Markit economist David Owen said in the release. "Shop closures and restrictions in domestic and international travel had huge repercussions on new business.”

In Egypt, the economy also received its lowest score since the survey began there in 2012 with a score of 29.7 for April — down significantly from 44.2 in March — and likewise indicating economic contraction, according to a press release. Domestic sales, foreign demand and employment all fell, Owen said.

“The reading signaled a severe decline in business conditions,” the release read.

Saudi Arabia received a score of 44.4, which indicated a shrinking economy, but marked an improvement from 42.4 in March. The March score reflected the steepest drop since the survey for the desert kingdom began in 2010, according to a press release.

Tim Moore, the company’s economics director, said in the release that business closures led to a decrease in consumer demand, and that the coronavirus pandemic affected international supply chains and exports in the oil-rich Gulf state. The slight increase from March has not led to much optimism in the Saudi business community, he said. “Survey respondents remain very cautious about their prospects for the year ahead, with business sentiment lifting only very fractionally from the record low seen in March,” Moore added.

All three countries began lockdown measures in March to curb the spread of the coronavirus.

The UAE had one of the strictest lockdowns in the world. Dubai required people to have police permission anytime they wanted to leave their homes — even to buy essentials — and closed most businesses.

All three countries have since eased their anti-virus measures as part of a wider trend in the Middle East amid the Islamic holy month of Ramadan and economic hardship. At the start of Ramadan in late April, Dubai allowed people to again leave their homes without permission during the day. Egypt also allowed businesses to reopen at that time, as did Saudi Arabia.