There were explosions at a military warehouse in Homs and airstrikes in the Syrian Golan Heights today. 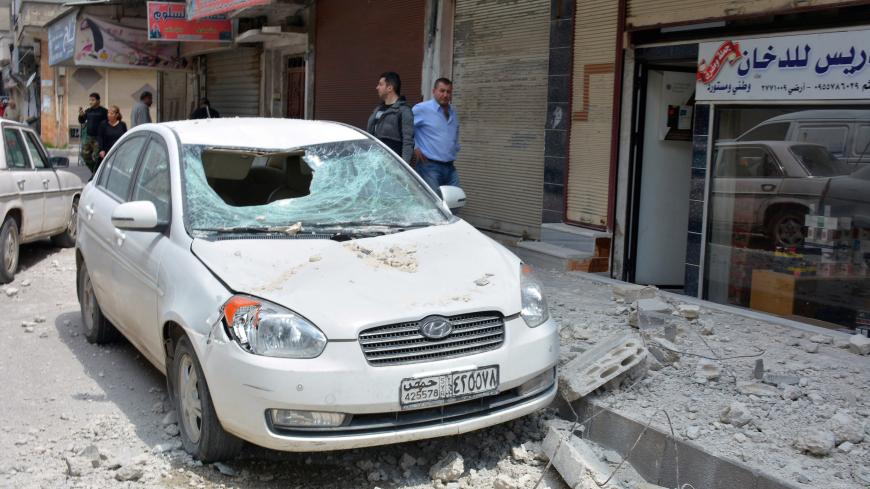 People inspect the damage after a blast east of Homs city, Syria in this handout released by SANA on May 1, 2020.

Two sets of explosions occurred in Syria today and there are conflicting reports on Israel’s possible involvement.

One set of explosions took place at a military warehouse in the central Syrian city of Homs. Ten civilians were injured and the Israeli military declined to comment on the incident, The Associated Press reported.

The Syrian state news agency SANA reported that the explosion on the city's outskirts was caused by “human error” and took place at an ammunition depot. The explosion occurred during the movement of ammunition, a military source told SANA. Some people were injured due to shrapnel from the explosion and the incident is under investigation by local authorities, the outlet reported.

However, the pro-opposition Syrian Observatory for Human Rights reported that Israeli shelling of ammunition and missile storage facilities in Homs caused the explosion, citing unidentified sources.

Also today, Israel reportedly fired missiles into the Syrian Golan Heights in the south of the country. Syria activated its air defense systems and the missiles came from the Israeli part of the Golan Heights, according to SANA.

Iran’s Lebanese ally Hezbollah has a presence in the Golan Heights. The Israeli military did not comment on the strike, but a regional intelligence source told Reuters that Israel is increasing its attacks in Syria during the worldwide coronavirus crisis.

Israel frequently strikes Iranian and allied targets in Syria. Israel and Hezbollah have had a long-standing conflict near the Israel-Lebanon border. Iran is Hezbollah’s main backer, and Hezbollah fights with Iran alongside the Syrian government in the Syrian civil war.

Though Israel did not comment on either of today’s incidents, Israel’s defense minister recently said the country is taking action against Iran in Syria.

“We have moved from blocking Iran’s entrenchment in Syria to forcing it out of there, and we will not stop,” Defense Minister Naftali Bennet said in a statement reported by The Times of Israel. “We will not allow more strategic threats to grow just across our borders without taking action.”

He added, “We will continue to take the fight to the enemy’s territory.”