Following the breakdown of the Riyadh agreement, and renewed fighting in April, Saudi Arabia hosted the STC president to discuss the situation, but it remains doubtful the Gulf state can offer an easy solution if the war with the Houthis is not settled first. 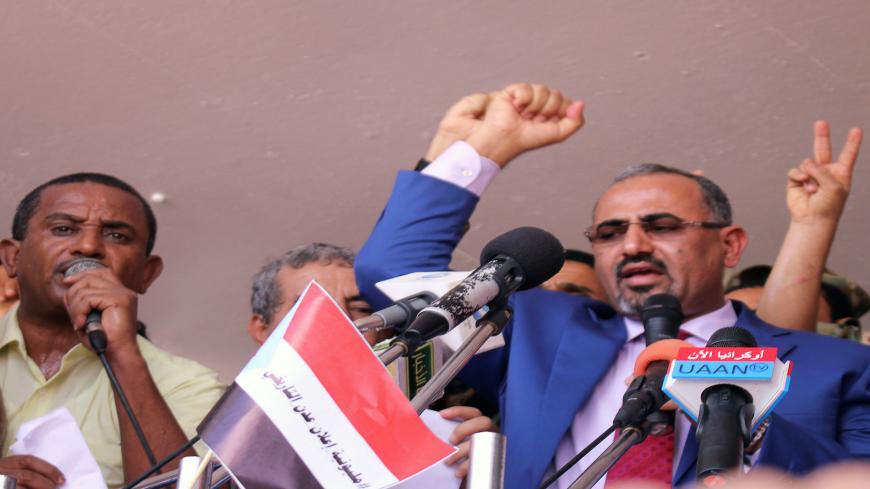 Dismissed governor of the southern Yemeni port city of Aden, Aidarous al-Zubaidi (R), waves to supporters of the separatist Southern Movement as they demonstrated against recent decisions by President Abed Rabbo Mansour Hadi that sacked senior officials supported by the United Arab Emirates, including Zubaidi in Aden, Yemen, May 4, 2017. - REUTERS/Fawaz Salman

The STC initially said the trip was scheduled to last three days. On May 26, an STC official told Al-Monitor the talks had reached day eight.

The visit is the STC’s first since last year’s Riyadh agreement broke down, with each side blaming the other. Earlier this month, government forces launched attacks against STC positions outside Zinjibar in Abyan province, just 60 kilometers (37 miles) from the de facto capital Aden.

The fighting came after the STC declared administrative autonomy in Yemen’s south in April, likely a grasp at domestic legitimacy rather than a stroke at genuine secession. But the move has only served to renew the conflict between the ostensible allies, further distracting from their shared fight against Yemen’s Houthi rebels in the north.

With war-weary Saudi Arabia eyeing a delicate exit to the war and the United Arab Emirates likely to remain deferential to Riyadh's coalition leadership, observers are left wondering how the Saudis will be able to patch up the broken coalition yet again.

The supposed partners have fought numerous times during the current civil war, which has now entered its sixth year and has been dubbed by the United Nations the world’s worst humanitarian crisis.

The recent fighting underscores that the STC’s deeper grievances will not soon be remedied by another quick fix in Riyadh. “From the moment the Riyadh agreement was signed, it was clear that implementation of the deal was going to be problematic,” said Hannah Porter, a Yemen analyst at DT Global, an international development firm based in Washington.

“The details were vague. This allowed each side to come away from the agreement with two very different ideas of what implementation would look like,” Porter told Al-Monitor.

The deal also stipulated security arrangements be carried out on an impossibly short timeline, and did not specify in what sequence certain obligations were to be implemented.

Both sides nominally agreed in November that the STC should give up its heavy weapons and integrate into the Yemeni government’s forces. But the STC has refused to hand over its weapons until it reaches a political settlement for inclusion in the government. The government insists the STC give up its weapons first.

Though the November agreement affirmed the STC’s place at the table in future UN-led peace talks, the Houthi’s apparent rejection of a coronavirus cease-fire in April has brought the wider war no closer to the finish line.

Experts say the situation has left the STC with two options if it wants to secure its future in Yemen: It can seize control of the country’s south — which it has so far failed to do — or continue to vie for a seat at UN-led peace talks through a political agreement with Hadi.

“The STC is not just going to dissolve the Riyadh agreement, because they would lose their chance at participating in peace talks,” said Elana DeLozier, a research fellow at the Washington Institute for Near East Policy.

“That’s why they likely will not give up their weapons unless a deal to include them in the government is faithfully implemented with Hadi,” DeLozier told Al-Monitor by phone. Although the Saudis can bring the Yemeni president to the table, there is no indication they can force him to compromise, she has argued.

At least publicly, Hadi remains defiant. The recent offensive in Abyan was aimed directly at the STC’s already limited leverage in the south. And with an unclear role in Yemen’s future, observers say Hadi’s intentions are not always easy to discern.

For all the challenges, Crown Prince Mohammed bin Salman appears to have few other options. Saudi Arabia cannot simply exit the war unilaterally without risking further Houthi consolidation, potentially leaving the Iran-linked Zaidi Shiite rebels in control of a state armed with ballistic missiles on Saudi’s southern border. Meanwhile, the Houthis stand to benefit from each subsequent day of coalition infighting.

Furthermore, if the STC is left out of future UN-led talks between the Hadi government and the Houthis, it could potentially act as a spoiler to a peace settlement, DeLozier said.

No matter how the current meetings in Riyadh turn out, some of the STC’s grievances against Hadi’s government will almost certainly endure.

What is often described as Yemen’s “war within a war” has deep roots in South Yemen’s civil war in 1986. The bad blood between Hadi and the STC is personal, congealed when the southerner president — then North Yemen’s defense minister — led the war effort against the independent south in 1994. The STC accuses the government of neglect, corruption and mismanagement to this day.

“On the one hand, you have a set of completely legitimate grievances on the part of southerners who want to reinstate their own independent country,” Porter said. “On the other hand, there is no realistic plan in place for South Yemen or South Arabia to be its own country. Regional and international players would need to buy into this idea of secession, and I don't see that happening.”

Gerald Feierstein, former US ambassador to Yemen and fellow at the Middle East Institute in Washington, said he believes southern Yemen’s deeper grievances cannot be adequately addressed until the broader war with the Houthis ends.

“The first order of business is to stabilize the economy and get everyone back to the negotiating table,” Feierstein told Al-Monitor by phone. “That’s going to take some time. You need to settle the big war first.”

"Until that happens," he said, “there won’t be any kind of economic stabilization or post-conflict reconstruction.”

“Yemeni history is replete with negotiations and agreements, none of which have ever actually been implemented because the parties never had the intention of following through on commitments,” Feierstein concluded. “Therefore, you are constantly reinventing the wheel.”