Yemen’s UAE-backed secessionists have hired a US lobby firm to build support for their cause as they threaten to overthrow the UN-backed government in Aden. 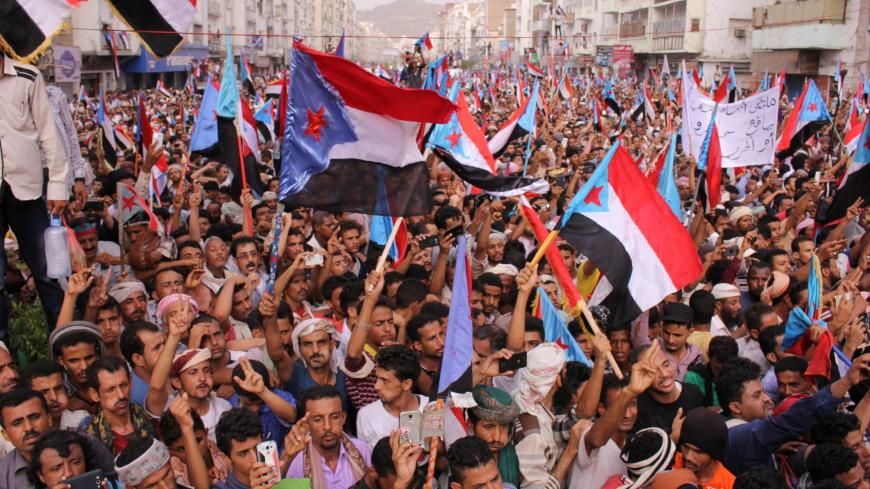 US policymakers have long been split over how far to support the Saudi-led campaign against Yemen’s Iranian-backed Houthis.

Now that debate is about to get even more complicated as southern secessionists from the port city of Aden take their grievances against the US-backed government of Abed Rabbo Mansour Hadi straight to Washington. The so-called Southern Transitional Council (STC) hired Grassroots Political Consulting earlier this month for $15,000 a month to “solicit support for the STC and the people of South Yemen to regain their sovereignty and independence,” according to newly filed disclosure forms.

The firm was hired to “provide political and strategic advice to the STC” while also offering to “lobby, provide informational materials, conduct meetings and offer to testify in committee hearings.”

The secessionists’ Washington foray comes as they threatened to overthrow Hadi’s UN-recognized government on Sunday unless he replaces Prime Minister Ahmed bin Dagher and his cabinet with a government of technocrats. Council leader Aidarous al-Zubaidi charged the Hadi government with “waging a misinformation campaign against the southern leaders using state funds,” and accused it of being beset with “rampant corruption.”

“It’s the lack of education, lack of safety, lack of infrastructure and the corruption that has kept the finances within the government itself and prevented it from being distributed for those absolutely critical elements for the people of South Yemen,” Daniel Faraci, the director of Grassroots Political Consulting, told Al-Monitor.

Faraci went on to cite the Hadi government’s “blatant corruption, the support for militias, the instability and lack of representation for all Yemenis, especially those in the south” as the impetus for the STC’s desire to secede.

“The grievances are things we take for granted here in the West and in many other countries as well,” he added. “These people have suffered enough.”

Congress’ attention on Yemen so far has centered almost exclusively on US support for the Saudi-led aerial campaign against the Houthis and Riyadh’s aid blockade as famine threatens 17 million civilians. Of the 28 legislative items introduced in Congress last year to address the crisis in Yemen, not one touched upon the southern secessionist movement.

Most commerce in Aden relocated to the capital, Sanaa, after the country’s reunification in 1990, and southern Yemenis have since accused the central government of marginalizing them. (The Houthis captured the capital from Hadi’s forces in early 2015, forcing the president to relocate to Aden.) They are specifically demanding greater inclusion in state welfare programs and have bristled at the sale of land to government-linked northerners. The separatists also accuse the north of hogging the profits from southern oil fields.

Further complicating matters, the council is backed by the United Arab Emirates, otherwise a close Saudi ally and key partner in the Arab coalition against the Houthis. Forces loyal to the secessionists have previously clashed with Hadi government loyalists for control of the Aden airport.

The lobbying push comes as House Speaker Paul Ryan, R-Wis., is leading a bipartisan congressional delegation to the UAE today after visiting Saudi Arabia on Wednesday. It is not clear if the delegation will address the secession issue in South Yemen as the agenda largely focuses on the campaign against the Islamic State and Iran’s growing influence in the region.

Interestingly, Grassroots Political Solutions also represents the family of Libyan strongman Khalifa Hifter, another UAE-backed actor. Hifter’s son, Khaled Hifter, signed a $20,000 per month contract with the firm in November to “advocate the political and strategic interests of the Hifter family in the US Congress.”