The news from a Syrian pro-opposition group contradicts statements by some Israelis that Iran may be pulling back from Syria. 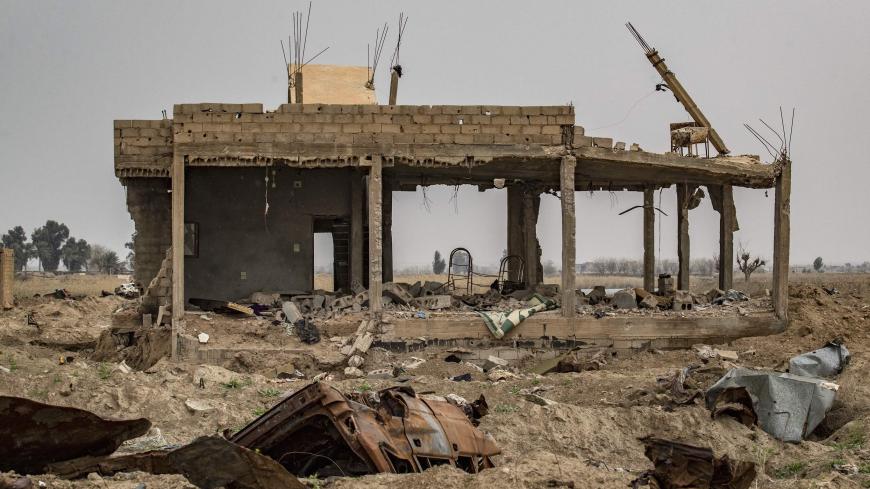 The house of local farmer Hamad al-Ibrahim is seen destroyed in the eastern Syrian village of Baghouz, on the Iraq-Syria border, on March 13, 2020, a year after the fall of the Islamic State's caliphate. - DELIL SOULEIMAN/AFP via Getty Images

More Iran-backed militia members entered eastern Syria from Iraq, according to a pro-Syrian opposition group. The report comes after statements by Israelis that Iran may be starting to withdraw somewhat from Syrian territory.

The Syrian Observatory for Human Rights reported today that buses carrying tens of fighers entered al-Bokamal in the eastern Syrian province of Deir ez-Zor, citing unnamed sources. The move followed an attack Saturday via an unknown aircraft on Iranian forces in the area. Earlier that week, the militias received reinforcements to one of their nearby bases, according to the observatory.

The Deir ez-Zor region’s deserts are also the location of much of the Islamic State’s recent activity in Syria.

This news follows remarks by some Israeli officials that Iran may be pulling back from Syria. Naftali Bennett, defense minister until a few days ago, said this week that Iran was withdrawing its forces from Syria following intensified bombings attributed to Israel, but he did not offer any evidence of this.

Israel is suspected of carrying out several recent bombings of Iranian forces’ warehouses and other facilities in Syria. Israel does not take credit for such attacks, but Israeli politicians have acknowledged hitting Iranian targets in the region.

An Israeli security source told Al-Monitor this month that Iran’s transfers of military hardware in Syria have stopped and that the presence of Iranian and allied forces is declining.

It is possible that Iran is simply adapting its position in Syria and some doubt the Islamic Republic is pulling out. Iran is under significant pressure from US sanctions, the coronavirus pandemic, the suspected Israeli bombings and the drop in global oil prices. This is making Iran’s military action abroad more costly, but Iran has had forces in Syria and Iraq for years. Tehran still has crucial interests in Syria related to Hezbollah in Lebanon and Mediterranean access.